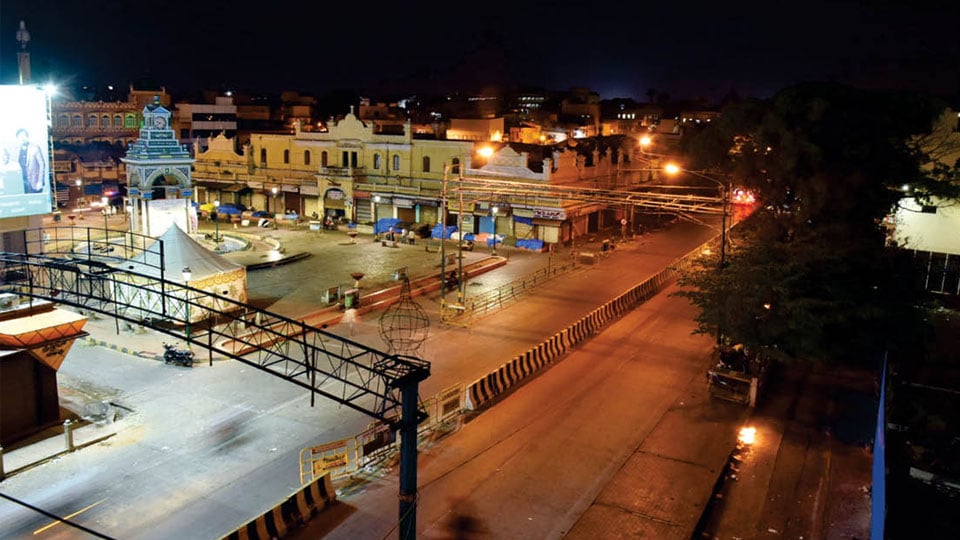 With KSRTC strike, travel plans of many outstation professionals have gone for a toss

Mysore/Mysuru: Day two of ‘Corona night curfew’ came into effect in city at 10 pm yesterday with business establishments downing shutters well before the appointed hour. As the enforcement by the Police was strict on the first day, second day was a smooth affair and the Police have decided to keep the same momentum till Apr. 20.

In the city, which has been recording considerable number of new COVID-19 cases in the second wave, some of the shops, restaurants, pubs and commercial establishments across city were forced shut by the Police and commercial hubs wore a desert look. Traffic that was heavy from around 7 pm till 9.30 pm, thinned out after 9.45 pm.

The worst affected were those who had planned to head to their villages for Ugadi festival. In the absence of public transport as well as night curfew, their travel plans have gone for a toss and many of them are relying on private buses by paying through their nose. Even travelling till the place where private buses start from is a hassle as autos and cabs charging exorbitantly and the Police stopping the vehicles at every other junction.

Barricades were back on the roads and people were seen trying to head home early due to the curfew and the lack of public transport due to the strike.

The Police were seen asking many commercial establishments, especially on D. Devaraj Urs Road, Sayyaji Rao Road and Ashoka Road to down their shutters by 9-9.30 pm. Senior Police officers were monitoring the situation. A senior Police officer said that if the Police find vehicles moving unnecessarily, they will be booked. The staff at the checking points are checking vehicles which are allowed for essential services and transporting daily needs.

Strict action is being taken against violators under Section 51 (B) of the National Disaster Management Act (NDMA) and IPC Section 188 (Disobedience to order duly promulgated by public servant). Vehicles of  patients and their relatives or those providing essential services, were allowed to move at night. Passengers coming to and going from Mysuru are also allowed to travel but it is mandatory to carry travel documents.

Those who are moving after 10 pm should carry ID cards and required documents. It was a common scene to see people trying to convince Cops that they had emergency work and Cops refusing to allow them without valid reasons.

The State Government which had come under fire for asking night shift employees to travel to their respective places before the curfew was in place (10 pm) modified the order.

Now, vehicles transporting employees will be permitted with authorisation letter issued from their employers. Also, the employees must carry their identity cards.