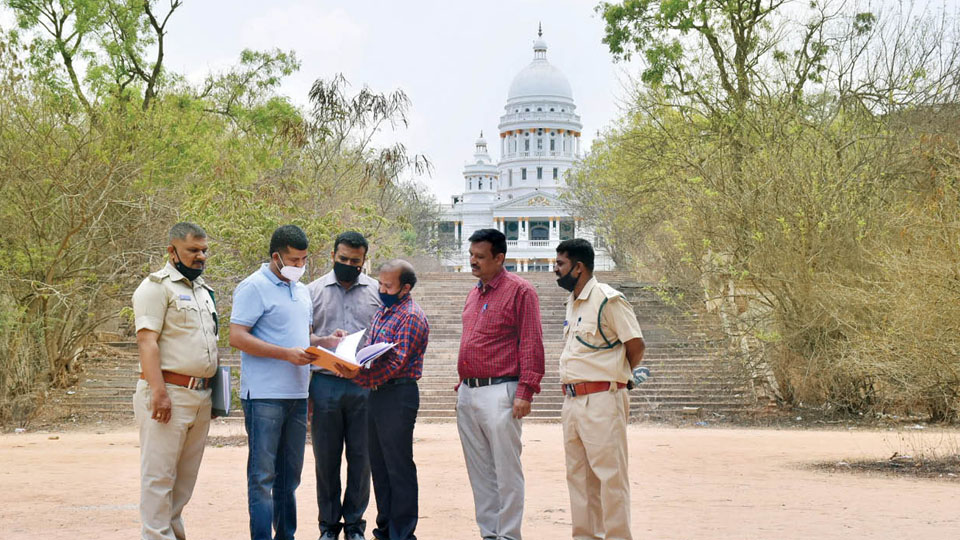 Calls the project a publicity stunt; says no tree will be chopped near Lalitha Mahal

Mysore/Mysuru: Heli-Tourism concept without a vision document is a flawed one and the much-publicised project will not be allowed in Mysuru at the cost of environment. Public opinion against the project is rising by the day and the Government will not go against it, said Mysuru-Kodagu MP Pratap Simha.

He was speaking to reporters and also was interacting with Tourism and Forest Department officials at Lalitha Mahal Palace premises this morning where hundreds of trees have been marked for cutting to construct helipads and helicopter docking stations.

Heli-Tourism is a dream project of Tourism Minister C.P. Yogeeshwar and much has been written about it. Also, opposition to cut trees in the butterfly zone of Lalitha Mahal is growing by the day. Mincing no words, the MP called the Heli-Tourism project a publicity stunt.

“The concept of Heli-Tourism itself is a flawed one and there is no forethought of future planning. For who is the project being implemented? What is the revenue model? How tourism can be promoted if only an elite group of tourists hop on and hop off the choppers and visit four to five locations n Karnataka,” MP Pratap Simha questioned.

“If the intention is right, no one will oppose any project. But here we don’t even know how the Heli-Tourism is being planned and what are its implications. We are only reading and seeing scattered reports in media. Is the Mysuru District Minister S.T. Somashekar aware of such a project that causes massive destruction of trees? Moreover why the Heli-Tourism project in Mysuru when a 10-lane expressway is coming up in another year or so? The expressway will take tourists between Mysuru and Bengaluru in just one hour. Also, we have flight facilities from Mysuru,” he pointed out.

When compared to road, rail and flights, Heli-Tourism is expensive and who can afford such a facility and how long the project can be sustained, Simha asked. “The Tourism Minister is planning to construct helipads and docking stations near Lalitha Mahal by cutting trees in a green zone. There is already a helipad built by the Maharajas. The Minister can instead ask the Wadiyars to rent out or lease the land for Heli-Tourism facility and the Wadiyars, who have strived for the welfare of citizens, would not refuse. Why cut trees and make the land barren,” he asked.

The MP said that he would take the issue to the District Minister Somashekar and Chief Minister B.S. Yediyurappa and will apprise them about the growing public opinion on mass cutting of trees in the name of Heli-Tourism. “We cannot go against public opinion,” Simha said.

Taking the Tourism and Forest Department officers to task during inspection, the MP took objection to the way tree trunks have been scrapped to number them. “Is this the way to number a tree? You are already killing a tree by scrapping its bark. If at all the tree had to be numbered, the numbers could have been painted on tree trunks without damaging it,” he said.

If Heli-Tourism has good intention and if it really makes a difference to Karnataka Tourism, choppers can even fly from Mysore Airport, the MP said and assured the officials to provide land inside Airport for Heli-Tourism. “I have instructed the Forest Department not to permit felling of trees at Lalitha Mahal,” he added.