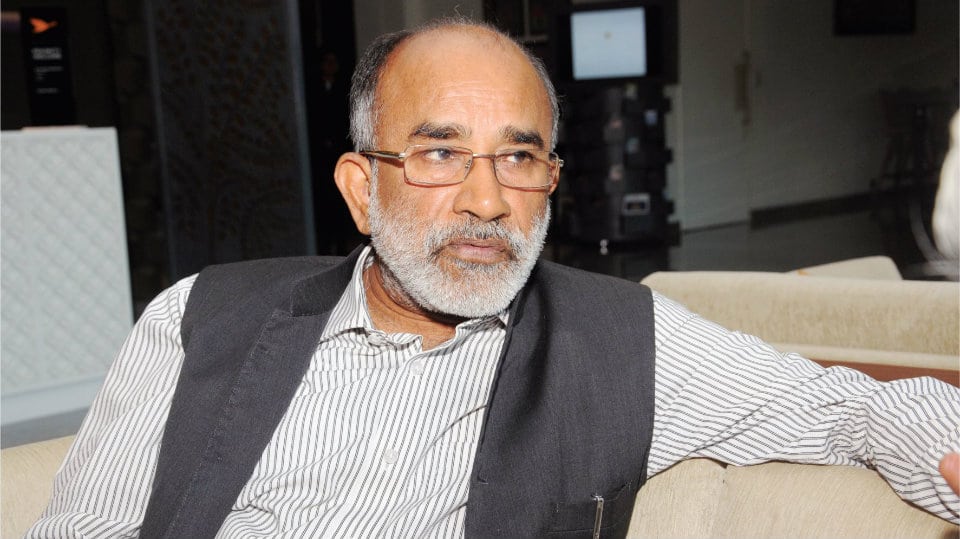 Tourism in the country benefits people in three ways; it creates employment, helps infrastructure development and generates revenue in foreign exchange. Mysuru, though has always been touted as a tourist destination, needs more push and the effort of a private enterprise, Mysore Travel Mart, in this direction is quite laudable. Union Minister of State for Tourism (with Independent charge) Alphons Joseph Kannanthanam had himself come all the way from New Delhi to inaugurate the event in Mysuru recently.

Star of Mysore Features Editor N. Niranjan Nikam caught up with the Minister at Hotel Grand Mercure for a brief chat and the suave, articulate, former bureaucrat spoke about converting Mysuru into Paris as promised by Narendra Modi in his 2014 election speech before he became the Prime Minister and his willingness to take Mysuru internationally… Excerpts. —Ed

Star of Mysore (SOM): What is your opinion about Mysuru Travel Mart, a local initiative?

K.J. Alphons: I think it is a very good thing. I believe travel and tourism has been driven by local community. Therefore, this kind of local initiative is very good for us. Unless community at large is going to own up tourism nothing much is going to happen. And once community owns it up, everything is going to fall in place. There will be responsible tourism in terms of us looking after our own city, our own local products and for all that to happen the local community has to benefit and unless it benefits that kind of local involvement is not there.

People should come and stay here, savour the place and then they will do souvenir shopping. After all, Mysuru is famous for silk. And when they hire local autos and taxis even they will be benefited. It is also nice to see that it is a local initiative driven by local people and not a government initiative. Gone are the days when you expected everything from government, especially for tourism.

Our Prime Minister is very very clear that tourism has to be citizen-driven. All stakeholders must take responsibility because it is that kind of sector. That is why we returned Hotel Lalitha Mahal Palace back to the State Government. You run it locally, because we believe government should not be in the business of running hotels. We should facilitate but not run them.

We are kind of divesting all the 14 hotels we have except Hotel Ashoka in Delhi because it is too big a property to be divested. It is in the heart of Delhi on a 23-acre land. It is worth Rs. 5,000 crore, almost a million dollars. 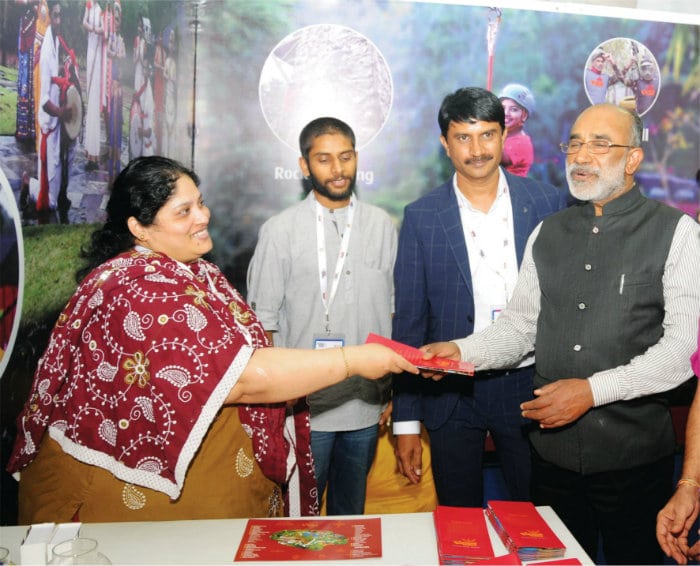 SOM: The Prime Minister in his speech at Mysuru had promised to convert Mysuru to Paris. Is there any concrete plan formulated by the Ministry to achieve this goal? In fact today BBMP in Bengaluru has spoken about Times Square in New York model for Bengaluru on Brigade Road.

Alphons: All these are very good initiatives. Local authorities and State Government should take the initiative. Everything can’t come from Delhi. I think it is a very good idea that Bengaluru has thought about converting Brigade Road into Times Square. I have been to Times Square many times.  Brigade Road should just not be a place to run vehicles and allow them to run over people. It should be completely traffic-free, a place to relax and talk. There should be lot of walk-around and eating places.

READ ALSO  Luxury destinations to visit around the world

Paris initiative is very good. We certainly want to do it. The Central and State governments should talk along with local authorities and see how we do it. It involves certain basic attitude. We want people and we want them to have a good time. We have to create right infrastructure like food parks, trees, parks, fountains, water cascades and river-front in Srirangapatna which can be developed into a nice water-front.

Mysuru is a model city. You have lot of things going for you like heritage, salubrious weather and tourist-friendly people. You must be really so focused and say tourism is going to be the mainstay of the economy. That kind of a decision has to be taken. The problem is, most State governments do not put in money for tourism and local bodies have no concept of tourism. Hence, they fail to create infrastructure, very often garbage is a major problem and security a main issue.

SOM: The Incredible India Campaign ­— both domestic and international — had done injustice to the State of Karnataka and Mysuru in particular. I hope that in the new campaign some justice is done for this city.

Alphons: Certainly. I have also decided to have State-specific, location-specific advertisements. We are willing to take Mysuru internationally, but I must tell you, it all depends on the kind of global, international basic infrastructure you create like I said earlier. If you are willing to do it then I will take it up.

You have to give me good stuff to advertise based on actual facts. You can’t just say we have international standards and the tourists land up here and find that you don’t have it. So all need to sit together and see what the gaps to be filled are.

What we find lacking is, you see for instance, all these heritage sights close by 5’O clock. Then what? Most tourists who come to India have to lock themselves up in the rooms. There is no evening entertainment. See, the big money comes from night entertainment, night tourism. That should be the big money spinner. When you say night tourism in India, people interpret it as night club. It is not even a small fraction of night life. If you can create proper environment at night, walk around, shop around, these are ideas that need to be worked on.

SOM: Mysuru had this kind of night life during the days of the Maharajas when they used to come back in the return procession during Dasara at night and thousands would gather to watch the fairyland atmosphere as the Maharaja on the elephant would fold hands and people would go gaga. From a groundnut seller up, everyone would make money. All the handicraft shops would be open till 2 am and tourists would make their purchases.

K.J. Alphons: You have the Maharaja! Go back to traditions. He can be used to be a part of Dasara celebrations. The old royalty and new elected democratic set up can all be a part of this. I am sure the Mysore Palace is still a big draw. Therefore, royalty can bring in tourists. Why don’t you ask him? The Maharaja can create a separate identity and if he is bringing in tourists, then use him.

SOM: If our local officials take initiative and send some detailed project reports for some tourism projects through the Department of Tourism, would your Ministry approve it ?

Alphons: We will have to sit down and see. We have Swadesh Darshan and Prasad schemes under which we finance a lot of stuff especially for creation of infrastructure. I don’t think any proposal from Mysuru has come. Nothing is before us.

SOM: In spite of being a tourist destination, Mysuru does not have its own convention centre, can anything be done about it?

Alphons: That is one thing we need to create under PPP mode wherein the government will give the land on long term lease, say 99-year-old lease and collect a lease fee spread over 100 years. If you give it on lease and it is very high then nobody would be interested.

Follow the Madhya Pradesh model wherein you collect the lease fee over a period of 25 years or 50 years, so the land comes virtually free. This has to be done by the State government as they are in possession of the land. They should give out land on long term lease and the lease fee collected over a long period of time to build a Convention Centre and then private sector will come to do it.  After all this, if economics does not work out, we are willing to put in some money, which is the viability gap and the Centre is willing to pay for it.

SOM: The biggest hurdle facing the tourism industry is multiple taxes for tourist vehicles. If there is a single entry tax for South India, this problem can be resolved to a large extent feel the people in the industry?

Alphons: No, I will take it up. This is an issue which concerns all the State Governments in South India. So all of them have to sit down and decide and take a decision. But we don’t mind taking it up provided there is a representation given to me in writing about this issue. Then I can consult the State governments. But it is the State governments who have to work.

SOM: Mysuru deserves an international project to preserve its heritage city status. For instance, two important landmarks Devaraja Market and Lansdowne building are lying in a state of neglect and they are in the process of being demolished. Hence, if good money of at least Rs.100 crore is sanctioned, such buildings can be restored, feel the experts. Can something be done about it?

Alphons: These have to be done by local and State governments. Is Lansdowne building an archaeological heritage site of the State or of the ASI (Archaeological Survey of India)? If it belongs to ASI, then I can ask the Centre to do it.

SOM: What is happening to tourism in the country?

Alphons: We are doing very well. Last year the foreign tourist inflow has crossed ten million which is an increase of 10.5 per cent over the previous year and the income has gone up by 20.5 per cent which is 27 billion dollars — equivalent to Rs. 1,80,000 crore. We provide about 7 per cent of GDP of the country and provide 12.36 per cent of employment.

ONE COMMENT ON THIS POST To ““Night Tourism in India interpreted as Night Clubs”, Says Union Tourism Minister K.J. Alphons”