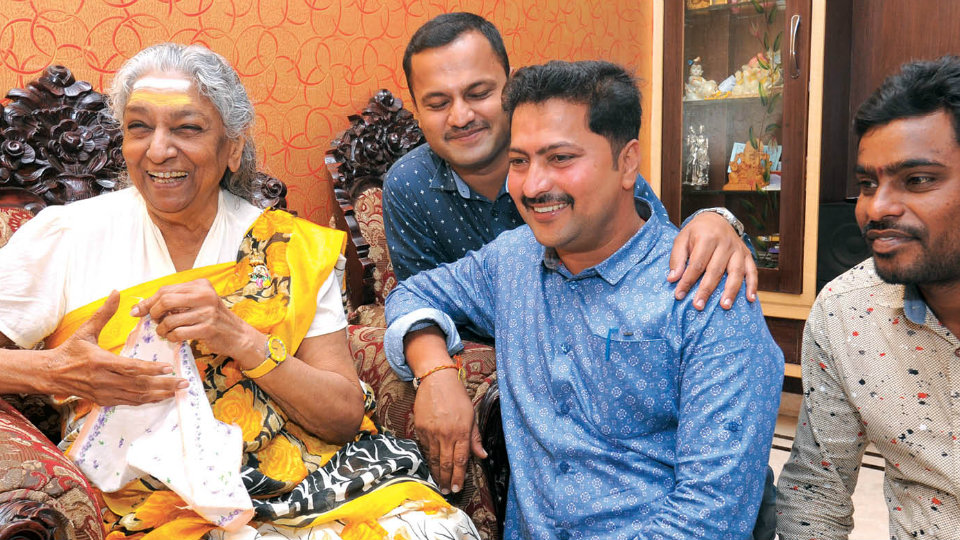 Mysuru: Multilingual singer S. Janaki, considered as the Nightingale among singers, will bid adieu to singing in the heritage and cultural city, Mysuru on Oct. 28.

There were rumours doing the rounds that the singer, who is not only well-known in the country but also has made her name internationally, is going to stop singing. Now that the singer herself has admitted that she is bidding goodbye to singing, all rumours are laid to rest.

In a tete-a-tete with Star of Mysore, Janaki, who was in Mysuru on Thursday visiting one of her fans Naveen’s residence in N.R. Mohalla, spoke from the heart and said, “I have sung for renowned music composers and directors in many languages including Kannada. Having sung for so long, I am fully satisfied. There are many more, who want to sing. Hence, I have decided to give up singing all together.”

Child prodigy: Janaki was born on April 23, 1938 in Repalle, a village in Guntur District of Andhra Pradesh. A child prodigy, she started singing from the age of three. She started her singing lessons with Nadaswara Vidwan Paidiswamy. In 1956, she won a competition organised by Akashavani and drew everyone’s attention. She received the award from the then President Dr. Babu Rajendra Prasad

Janaki sang one of the most beautiful melodies sung by the legend Lata Mangeshkar ‘Rasika Balama’ and won a contract with AVM. The first movie she sang for was the Tamil movie ‘Vidiyin Vilayattu,’ for which the famous Music Director T. Chalapathy Rao scored the music. Later, she sang in a Telugu movie MLA and Kannada movie Krishnagarudi and her singing career took off. She also started singing in Malayalam movies. Thus, she sang in all the four South Indian languages — Kannada, Tamil, Telugu and Malayalam. She also started singing for Hindi movies.

I am 80: I will be turning 80 next year. Some of the best music composers and directors have made me sing for them. Since I will be 80, I don’t think I should sing anymore, I will withdraw from singing. Today’s children sing magically. I am seeing many children singing on Reality Shows. There is so much  to learn from them. The children should not stop singing, she advised.

God’s gift: I have not learnt music. I went just for ten months to gain knowledge about music. But because of the God given gift I continued with my singing. I can sing music of any genre with ease. A few are born gifted with a rich voice. Such people can sing very easily. Those who are not gifted must practise hard and sing, she said.

Sang in 1952 in Mysuru: I had sung in Mysuru in 1952 with P.B. Srinivas at a programme organised by G. K. Venkatesh. I do not remember the place where it was organised but all I remember is that it was a junction of four roads in a big ground. The music lovers had gathered in large numbers. After this, I have never performed in Mysuru.

Now, due to Naveen, who is like my son, Praveen and Pavan who have been requesting me to sing in Mysuru, since the last ten years that I finally decided to sing here on Oct.28 evening at 6 in the Amphi Theatre, Manasagangothri. This will be my last programme, said Janaki, categorically.

I am ready to sing, are you willing to come?: I want the audience to be present at the venue before 5.30 pm. I will sing for nearly four to five hours. But the people of Mysuru should be ready to listen. Those who come with the children should eat their snacks and come. If you are happy to listen to my singing  I will be very happy. I will sing all the songs, which are super hit ones, she said.

Climbed the Hill: I might not have performed in the heritage city but I have visited Mysuru several times. Four years ago I came to Mysuru and climbed the Chamundi Hill along with the children. I have had the darshan of Goddess Chamundeshwari and seen the beautiful Mysore Palace and KRS. Mysuru city is a lovely city, said Janaki.

Every song is my favourite: I have sung thousands of songs till now. And especially the songs I have sung in Kannada are all very special to me. As much as I love club dance songs, I love the love songs too, she said.