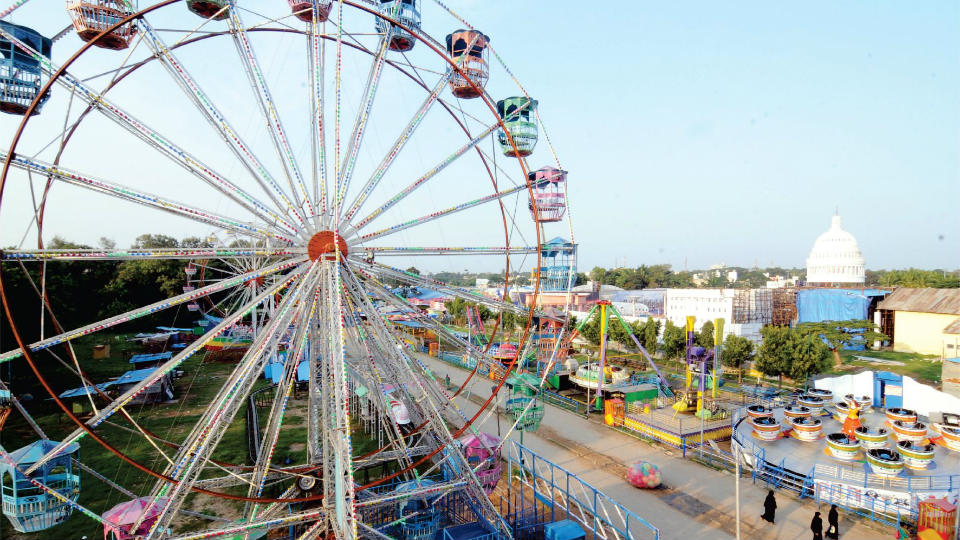 Exhibition Calling: Shop till you drop at Dasara Expo

One of the most visited tourist attractions in Mysuru is the Dasara Exhibition at Doddakere Maidan. The annual expo begins on Day-1 of Dasara and goes on till three months. The place has been attracting people from different walks of life who come along with their friends and family to spend some quality time and experience a variety of cuisines and games.  This Weekend’s Star Supplement focuses on Dasara Exhibition that is among one of the must visit places.

Dasara Exhibition attracts lakhs of tourists from various parts of the State and even neighbouring Kerala and Tamil Nadu. The exhibition is held for almost three months from October to December.

The Karnataka Exhibition Authority (KEA) was established in 1981 to organise exhibitions besides looking into proposed construction of Karnataka Kalamandira and Vishwa Kannada Sammelana Guest House and shopping complex. The construction of these buildings were completed in 1985 and was handed over to the Kannada and Culture Department during 1989.

However, the job of conducting Dasara Exhibition was given to the Department of Information, Tourism and Youth Affairs from 1994 to 2003 under the banner of Departments of Kannada and Culture, Information and Tourism. 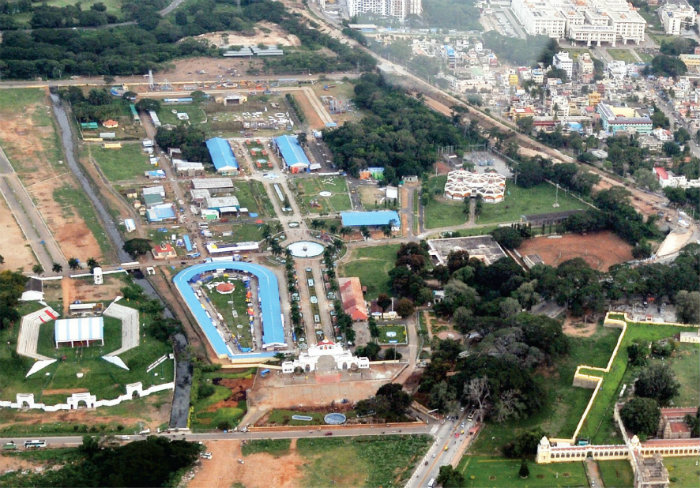 The State Government has leased out 80 acres of land to the authority for a period of 30 years starting from 1996 to host the exhibition. Accordingly, the Dasara Exhibition is held every year for a period of 90 days with craftsmen, weavers and other sellers displaying their products for the visitors. There is a specialty about this entranceway of the Dasara Exhibition, which is an attraction in itself. The arch at the entrance has been built on the lines of the eastern gate of Mysore Palace. It is 50-ft high, 165-ft wide and illuminated grandly every day during the 90-day exhibition.

Like every year, this year also various government departments, boards, authorities and 29 Zilla Panchayats were supposed to erect their stalls to create awareness on various welfare schemes announced by the State Government. Though Deputy Commissioner D. Randeep had set a deadline of Sept. 20, not many of the Departments and Boards have erected their stalls. 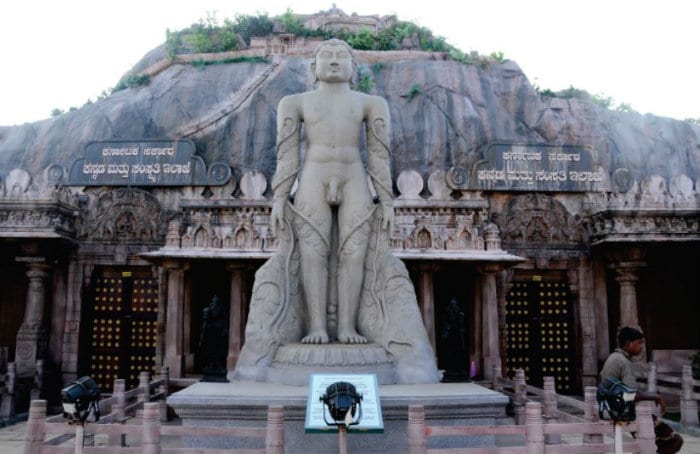 The Kannada and Culture Department stall depicting the Gomateshwara statue at Sharavanabelagola in Hassan district.

Every year, around 12 lakh people visit Dasara Exhibition to enjoy with their family and friends. Apart from these department stalls, the KEA has been coming up with theme-based attractions. While visitors enjoyed watching the replica of the Seven Wonders of the World and Amarnath Temple previously, this year, an impressive-looking replica of Capitol Hill, one of the historical monuments in the United States of America, has come up as the main attraction. It is open to the visitors from 4 pm to 9.30 pm every day and the entry fee is Rs. 40. There is also a selfie zone for visitors to click pictures with their loved ones.

There is an information board about the monument and has portraits of the first US President George Washington to the current President Donald Trump. 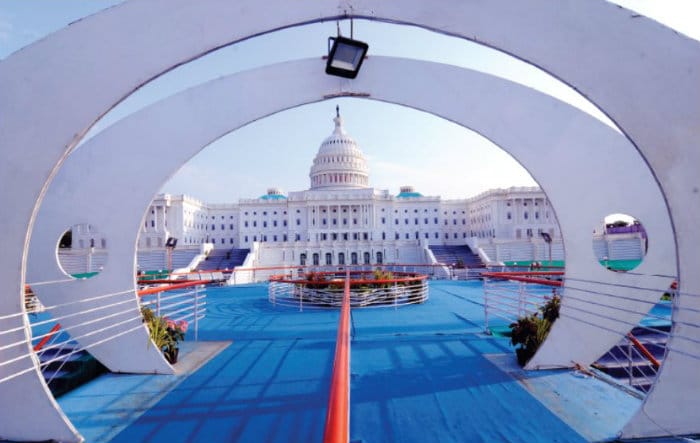 The replica of The Capitol Hill in the United States of America.

Dasara Exhibition is not only about stalls but it is also about a platform where local artistes can exhibit their talents. Exhibition has two stages – B.V. Karanth Rangamandira and P. Kalingarao Rangamandira — where cultural programmes are held. The exhibition has been inviting television and cine artistes to entertain the audience with a variety of programmes. The KEA is also open to rent out these stages for public to be utilised to conduct cultural programmes.

Apart from these, a total of two acres of area at the southern part of the exhibition is reserved for entertainment alone. Amusement Park comes up at the same area every year and the job is entrusted to the party concerned through tender. Games such as Giant Wheel, Columbus, Octopus, Fish Bin are the ones greatly admired by teenagers and adults.

The first thing that strikes one’s eye at the park is the Columbus that oscillates to and fro and reaches extreme heights with a great speed. The game creates a lot of anxiety and fear among people, but is at the same time greatly thrilling too. For children there is mini train, mini boating and a few other jolly rides.

Exhibition Authority has provided ample parking facility for visitors. Apart from utilising the Doddakere Maidan on the Bengaluru-Nilgiri Road, parking facility towards M.G. Road which is also being utilised by those visiting Mysuru Zoo. The parking space will be open throughout the year even after the closure of Dasara Exhibition to facilitate tourists who are visiting the Zoo. The huge parking area can accommodate 800 two-wheelers, 600 cars and 30 buses at once.

KEA has also made sure to maintain cleanliness around the exhibition. Every day people in-charge of cleaning are seen collecting the waste littered on the walkways to keep the surroundings clean. The Mysuru City Corporation (MCC) officials also keep a constant check over the use of plastic and the Health Department monitors the quality of food sold at the Exhibition.

For gastronomes, there are a wide range of eateries from churmuri to biryani and the freshly prepared fruit juice for people to choose from. However, a few stalls like the one that sells attractive looking huge Delhi Papad have ardent fans who visit the expo just to relish them even to this day!

The Dasara festival offered various programmes and exciting events to the city people and tourists, who stormed Mysuru. Though the fun and festive mood of this grand festival and its celebrations are fading away, the Dasara Exhibition still remains a major attraction for the tourists.

The Dasara Exhibition is the most famous shopping destination, especially for women who save money round the year to splurge on clothes and other household decorative items. 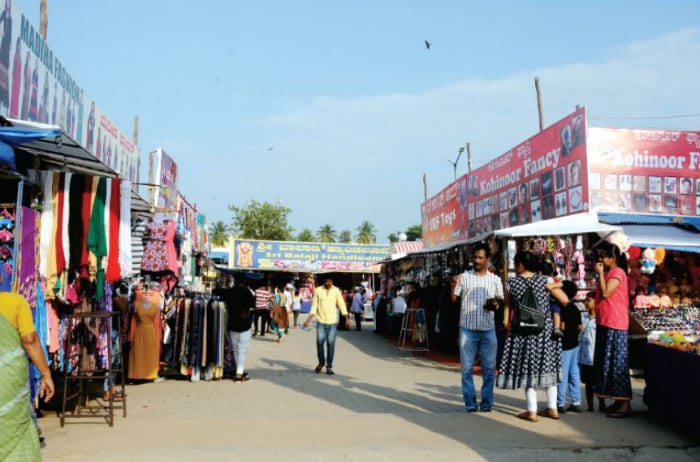 Visitors are seen shopping at the Dasara Exhibition stalls.

This year, the stalls offer a wide variety of items that range from clothes for all age groups including men, women and children. Traders have come from as far as Kashmir and Kanyakumari and have set up stalls.

Though initially rains and the resulting flooding hampered sales, disappointing the vendors, business is gradually picking up along with long holidays that has come as part of Deepavali. Traders are expecting more business in the days to come. 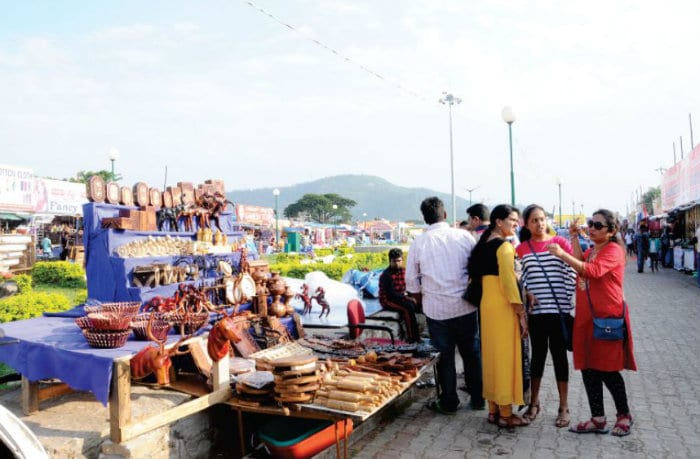 Products range from clothes to handicrafts to household decorative items.

The place is not only famous for the variety of food, accessories and other eye catchy colourful items, but also for the overwhelming amusement park, which has been largely attracting young and enthusiastic crowd. The park nowadays has some new added attractions, and names such as Columbus, Octopus, Fish Bin and The Ranger are the ones greatly admired. The first thing that strikes one’s eye at the park is the Columbus that oscillates to and fro and reaches height with a great speed. The game creates a lot of anxiety and fear among the people, but is at he some time greatly thrilling too. “There is a lot of anxiety and fear for the speed with which it moves but is really wonderful taking part in it and that’s what makes me be a part this wonderful game”, says Arun.

Yet another attraction is the Octopus that became a part of the Dasara Expo two years ago. Like the name itself suggests, it moves in a peculiar way. Speaking to Star of Mysore, Prathiba said, “It’s a fabulous thing to experience, and once we are on it, it takes us to a total different world. I would certainly come back and enjoy these games.”

However, the mother of all amusements is ‘Ranger’ which is greatly talked about and has been attracting hoards towards it, since it spins all 360 degrees in air and thrills people to the maximum as it completely turns them upside down. “I came to the expo for the sake of this amusement park. Every game here is splendid, but it would be great if some more games are added and their time duration is increased,” said Manoj.

In all, Dasara exhibition is a must visit at least once, for the families and friends to spend some free time ,have fun, experience the thrill and enthusiasm and be a part of something breathtaking and splendid!