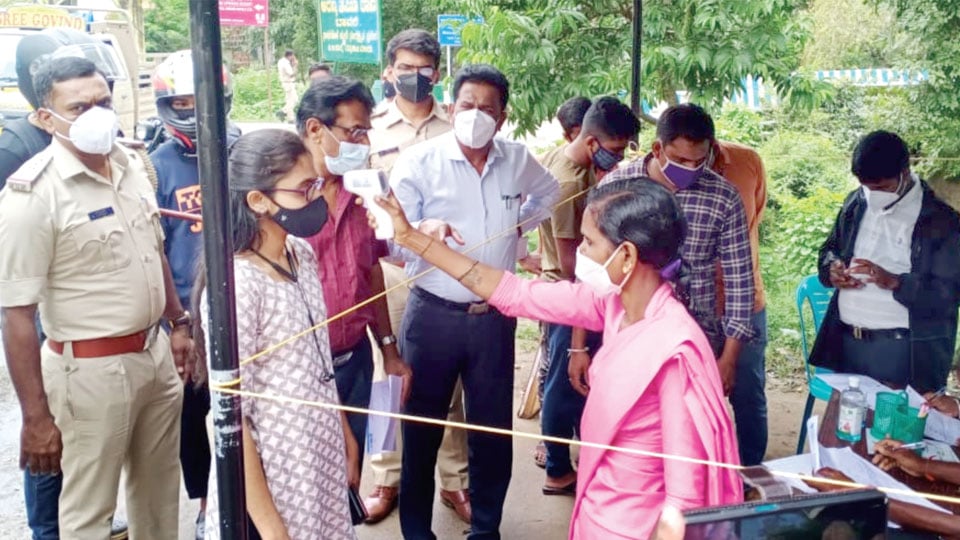 Mysuru/Madikeri: With Nipah virus cases rising in Kerala, the Health, Police and Forest Departments have strengthened its surveillance and preparedness in the districts bordering Kerala and the main focus is Mysuru, Kodagu and Chamarajanagar.

While officials manning the check-posts have been increased, those arriving from Kerala with symptoms like fever, altered mental status, severe weakness, headache, respiratory distress, cough, vomiting, muscle pain, convulsion and diarrhoea are being sent back. Apart from stringent Rapid Antigen tests at all check-posts, all entrants are being subjected to thermal screening and they are sent back even if there is a slight rise in temperatures.

Health officials from Mysuru and Kodagu said that there is no need to worry as of now. “No Nipah cases have been reported so far,” said Kodagu District Health Officer Dr. R. Venkatesh. “All regions sharing borders with Kerala are being observed closely and Nipah resistance activities have also begun,” he added.

Mysuru District H.D. Kote Taluk Health Officer Dr. Ravikumar said there is no need for panic as Nipah virus has not been reported in the districts neighbouring Kerala. He also added that the necessary measures are being taken to resist the spread of the virus.

Meanwhile, the Karnataka Government yesterday issued an advisory restricting the entry of students, employees and others into the State from Kerala till the end of October amid fears of Nipah outbreak and a possible third wave of the COVID-19 pandemic.

The Health Department has requested the authorities and other private players to see to it that people postpone their travel plans till the end of October.

Jawaid Akthar, Additional Chief Secretary in the Health and Family Welfare Department, said all Administrators and Principals of educational, nursing, paramedical institutions have been advised to instruct their wards to defer their return till the end of October. Further, they should direct their students and other staff not to travel to Kerala from Karnataka for the same period.

Similar guidelines have also been issued to all the administrators, owners of hospitals, nursing homes, offices, hotels, resorts, home stays, factories and industries. People have been advised to defer their plans to visit Kerala till the end of October.

The advisory also states that a surveillance system must be put in place to identify encephalitis clusters, which can lead to the early detection of a Nipah virus outbreak.

Samples from those suspected to be infected with the virus at the border districts, along with those of their contacts, are to be sent to the National Institute of Virology in Pune to confirm the infection.

District administrations have also been instructed to submit daily reports of the same, even if no cases are found. Nipah virus is an emerging zoonotic virus (a virus transmitted to humans from animals). Fruit bats of the family Pteropodidae — particularly species belonging to the Pteropus genus — are the natural hosts of Nipah virus.