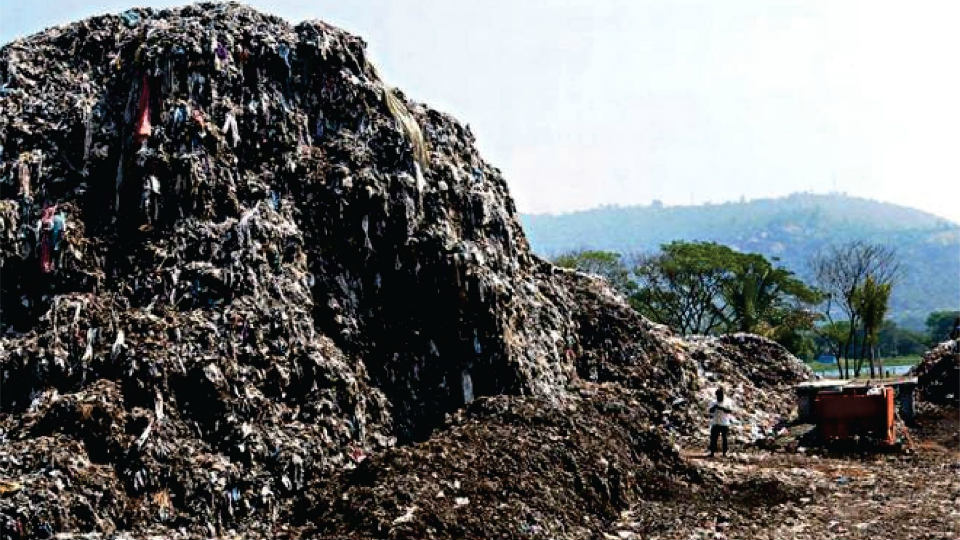 Mysore/Mysuru: The Karnataka Cabinet has approved the Detailed Project Report (DPR) worth Rs. 14.38 crore to clear mounds of legacy waste that has piled up over the years, causing unbearable stench at the Solid Waste Management Unit (Excel Plant) at Sewage Farm premises in Vidyaranyapuram, Mysuru.

Over 3.08 lakh tonnes of waste will be cleared under the project through biomining, said Mysuru-Kodagu MP Pratap Simha. The DPR was submitted for approval by the Mysuru City Corporation (MCC). It may be recalled here that in March this year, the MCC had called tenders from global bidders to clear the legacy waste at an estimated cost of Rs. 10.13 crore.

In January last year, after much struggles and protests, the District Administration took a decision to go ahead with a Bioremediation (biomining) project to clear the waste that has been dumped for over 30 years.

Bioremediation is the best process to clear the waste. It is a process of treating contaminated soil and subsurface material by altering environmental conditions to stimulate growth of microorganisms and to degrade the target pollutants. The company that bags the tender has the responsibility of segregation of the waste before processing.

The waste clearance work has been divided into three parts — biomining methods, outsourcing vehicles for the biomining project like excavators, backhoe loaders, front-end loaders, tippers and tractors and third is to transport the Refuse-Derived Fuel (RDF) derived after the booming to cement factories.

Pratap Simha said that the DPR has been prepared to include all expenditure and was re-submitted to the Government and the same has been approved by the Cabinet. Once the legacy waste is cleared, an estimated 25 acres of land at Vidyaranyapuram can be reclaimed by the MCC.