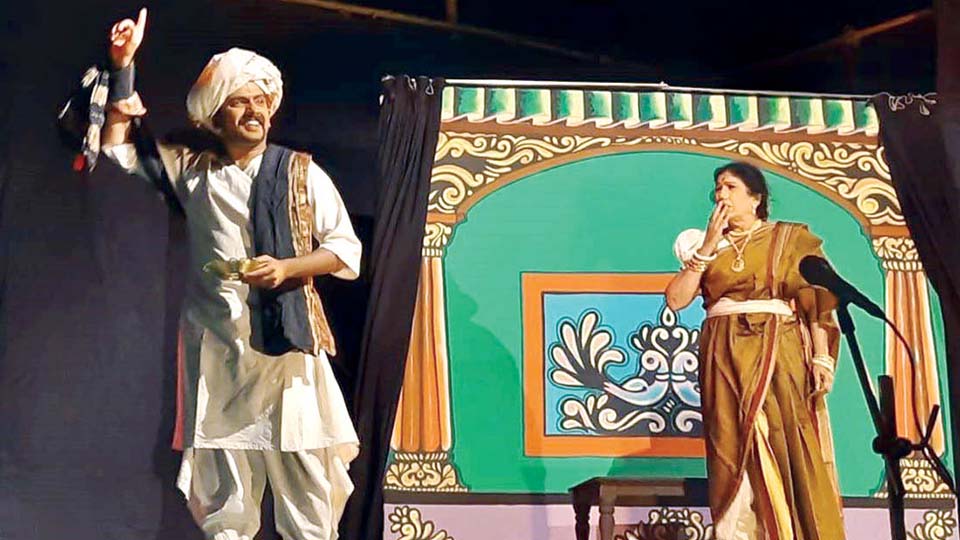 Mysuru: Niranthara Ranga Utsava 2022-23, a five-day Theatre Festival, has been organised at Mini Theatre in Kalamandira premises on Hunsur Road in city from Jan. 25 to 29 under the aegis of Niranthara Foundation, Mysuru.

This is a play about the life and achievements of Sakkari Balacharya (Shantakavi), well-known as the foremost playwright in Kannada. Scriptwriter Dr. Prakash Garud has called it a Documentary Bio-drama (Daakhalaati Jeevana Naatika). As the name itself suggests, Shantakavi alias Sakkari Balacharya is the protagonist of the play. Since it includes the historical/ biographical details of his life, it is apt that it is called Documentary Drama. The word Naatika is used in Bharatamuni’s Naatyashaastra (Adhyaaya 20) and Dhananjaya’s Dasharupaka (Prakasha 3). The writer has attempted to build the search for the identity of ‘Kannadatva’ in the background of certain real incidents of Shantakavi’s life.

The play presents the details of the history and explains the present political scenario as well. The central theme of the play includes the ‘conflicts between the internal and external principles, the three main characters, which are at the centre of political events.’ The play narrates the story of the historical failure of power politics. It wants to echo the thought ‘humankind needs religions to empower their inner self but not to showcase or impose their greatness on someone.’ Three of the Mughal descendants are the toy of history’s cruel politics: Shahjahan, Aurangzeb and Dara Shikoh. Amidst the rage of thought, the reality of how ordinary people suffer and become poor comes into play. Aurangzeb appears to be the one who wants to impose one religion concept and will sacrifice anything for victory in power politics.

Whereas Dara Shikoh’s view is completely different than Aurangzeb and has broader perspective towards the religions.  And in the other end, Shahajahan was looking for the same amount of ruling power even after getting down from the throne. Jahanara the Princess looks like the bonding bridge between them and has her strong ideologies towards the good.

Peacock is the central metaphor of the play, which is displaced as a result of a devastating war. Many events — from mythology, history, and present times — unfold around this metaphor. Isn’t the war an act of wickedness to steal other people’s land and wealth? A peacock that itself has lost its ground; stands as a silent witness to the dire phenomena. To such belligerence created by the powerful and the resultant displacement of the weak. It is not only a story of the suffering of civilians who become landless as a result of war, it is also a story of environmental destruction involving all life forms. The story of this drama also has the thread of regret that the swan that once roamed in the clear water pond has transformed into a poor duck today.

Instead of the dramatic dialogue design of the typical theatre, the play emphasises the narrative style used in the short story literary genre. That is, the actor acts out of the character and then turns into the character and speaks the dialogue of the character. In this way, the play is dual presentation of the actor-character along with the fragmented presentation of the documentary film clips, the dramatics of group acting, hyper-realistic — giant puppets etc. On a whole, the play has experimented as an illustration of a multi-media blend.

This play is based on a travelogue short story written by renowned Urdu writer Intizar Hussain. It was translated into Kannada by the famous author and educationist Prof. K.E. Radhakrishna.

Eminent theatre practitioner, playwright K.V. Subbanna improvised the story of Sadarame as Miss. Sadarame, which was originally scripted by Bellave Narahari Shastry. Now Samashti is experimenting on Sadarame. It is cleverly plotted and even a bit different from the Original story. The story revolves around an innocent middle-class girl Sadarame, where a prince got attracted to her and wanted to marry her, sacrificed his kingdom to his greedy father-in-law, and left the kingdom along with the newly-wed Sadarame. Unknown to the new world, Sadarame was exposed to difficult circumstances by the cunning travellers of the story. By her extravagant intelligence, Sadarame managed to escape from all Troubles and finally remained as Miss. Sadarame. The journey of the story is quite crazy and humorous, criticizing the present social situations.

Daklakatha Devikavya’ is an experimental play drawing on the epic poetry and stories of the important Kannada writer and founder-member of the Dalit Sangharsha Samiti, K.B. Siddaiah. This experimental piece begins with a re-reading of a cosmogonic myth from a community that is oppressed even amongst the oppressed narrating the origins of the world and of life on it. The play progresses through weaving and unravelling untouchable rituals, beliefs, hunger and desires through song and storytelling.

The nudi (speech, voice and word) of the untouchable community is like a breath inseparable from the body. By the same sound, the doors of the untouchable world are opened. Entering that world through that door also introduces a new dimension of the conflict and the intimacy and struggle it strives to achieve, a hitherto unreachable conflict. The whole play forces the audience to understand what it means to be human in the depths of all of our being while offering insights gained through the experience of untouchability.