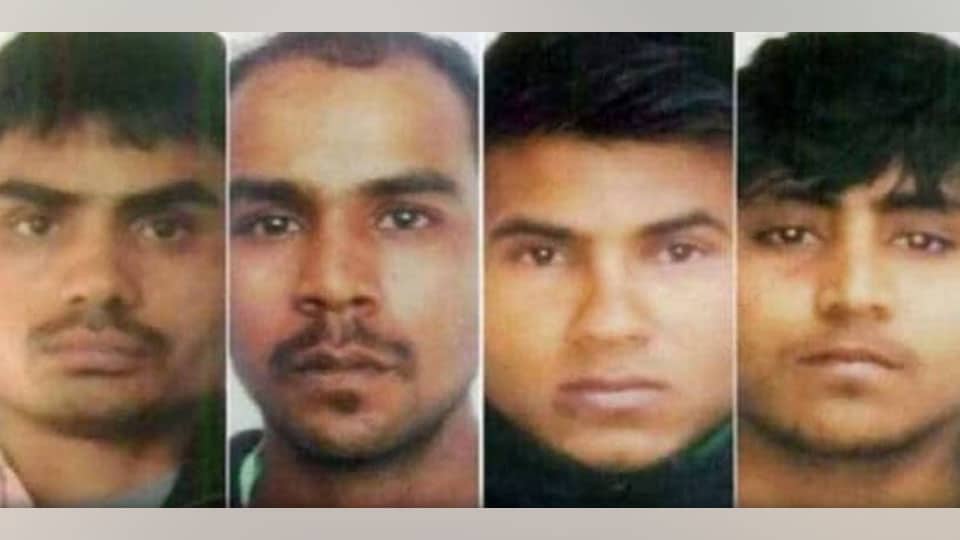 New Delhi: New Delhi’s Tihar Jail is preparing for the hanging of the four convicts in the Nirbhaya gang rape-murder case. Now, the Tihar Jail authorities have readied a new gallows frame which would allow for all four convicts to be hung together. With this, Tihar has become the first prison in the country where four accused will be hung simultaneously. Till now, the central jail had only one plank for hanging.

Sources in Tihar Jail said that a JCB machine was brought into the prison premises for the completion of the task as along with the frame for hanging, a tunnel needs to be dug underground too. It is this tunnel which will be used to transfer the bodies of the hanged convicts. All four convicts in the Nirbhaya case will be executed on Jan. 22 at 7 am in Jail Cell 3, the same place where Afzal Guru, the terrorist convicted in Parliament attack case, was hanged. The officials said they will be hanged together.

A court in Delhi issued death warrants against all four death row convicts in the Nirbhaya gang rape case last evening. The convicts — Pawan Gupta, Akshay Thakur, Vinay Sharma, and Mukesh Singh — will be hanged at 7 am on Jan. 22. The hangman, Pawan Jallad, will be called from Uttar Pradesh Prison Department. The Black Warrant was signed by Judge Satish Arora after hearing the arguments put forward by Amicus curiae and the Prosecutor.

Tihar Jail authorities will conduct dummy execution in the coming days ahead of their execution on Jan. 22. Earlier, it was scheduled to be held today. The dummy execution will be conducted in Jail 3.

“Tihar will conduct dummy execution in the coming days but not today,” said Tihar Jail administration in a statement. At the time of the dummy execution, the Executive Engineer of PWD, Superintendent and other Jail officials will be present, it said.

The ropes to be used in the execution have been ordered from the Buxar prison in Bihar. In addition, help has been sought from Pawan Jallad, who has agreed to carry out all four executions simultaneously. According to regulations, officials decided on the length and drop of the rope on the basis of the convict’s height and weight.

At this time, three of the four accused are being held at Jail No. 2 and the fourth in Jail No. 4 of Tihar Jail. They now have 13 days to avail of the legal remedies available to them, including mercy pleas and curative petitions. All of the four convicts will be allowed to meet their families one last time before the executions.

The 23-year-old paramedic student, referred to as Nirbhaya, was gang-raped and brutally assaulted on the intervening night of Dec.16-17 in 2012 inside a moving bus in South Delhi by six persons before being thrown out on the road. She died on Dec. 29, 2012, at Mount Elizabeth Hospital in Singapore.

While one of the accused Ram Singh committed suicide in Jail, the other accused was a minor and released. As per Juvenile Justice (Care and Protection) Act, 2000, a juvenile shall not be treated as an adult even if he/she is involved in any criminal acts for the purpose of trial and punishment in the court of law.