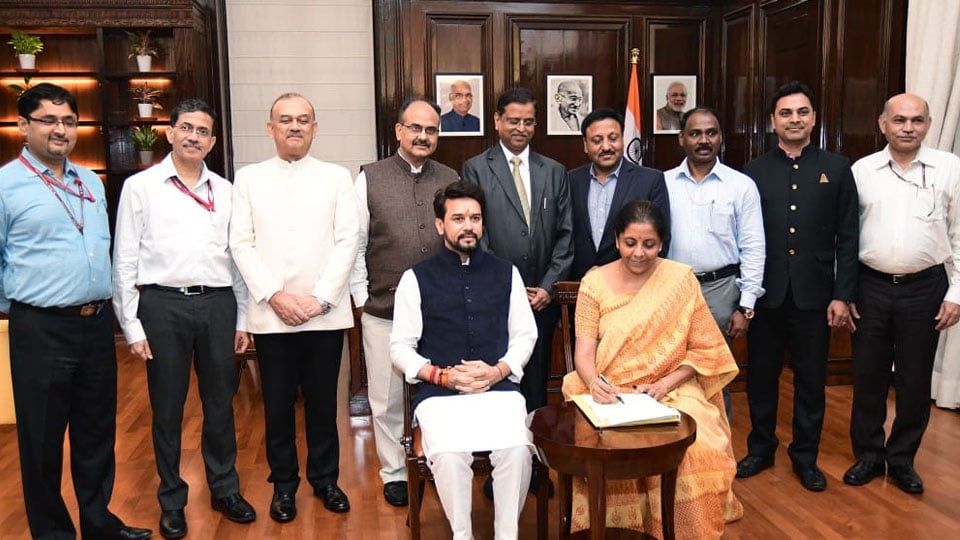 New Delhi: India’s first female Finance Minister in almost five decades, Nirmala Sitharaman, who has held a wide range of jobs including Defence Minister, will present India’s full-year budget for the next fiscal (2019-20) in Parliament tomorrow morning at a time when she is under pressure to spend more to reinvigorate the economy.

Fifty-nine-year-old Sitharaman faces what might become one of the toughest balancing acts of her career. She must find resources for welfare programmes announced by Prime Minister Narendra Modi’s government, including Rs. 87,000 crore for a new measure to support farmers. And, she must do all that while keeping the national deficit below 3.4% of GDP, a target credit rating companies are watching closely.

A day before the Union Budget is presented, Nirmala Sitharaman this morning tabled the Economic Survey 2018-19, prepared by Chief Economic Adviser Krishnamurthy Subramanian, in the Parliament. The Economic Survey projects the state of health of the Indian economy and outlines the challenges.

The Indian economy is at a 5-year low of 6.8% in 2018-19 and the fourth quarter growth has slumped to 5.8% which is a 17-quarter low. The Economic Survey argues for an ambitious agenda for social change, treating humans as humans, relying on the lessons offered by behavioural economics.

“The theme of the survey – ‘Shifting Gears’ – is intended to achieve a sustained growth rate of 8 per cent. Using the learning from the Global Financial Crisis, the Survey departs from traditional thinking to view the economy in either a vicious or a virtuous cycle,” said Subramanian.

“The Survey makes a sincere effort to live up to the expectation of being an indispensable guide for following, understanding and thinking about the Indian economy,” he added.