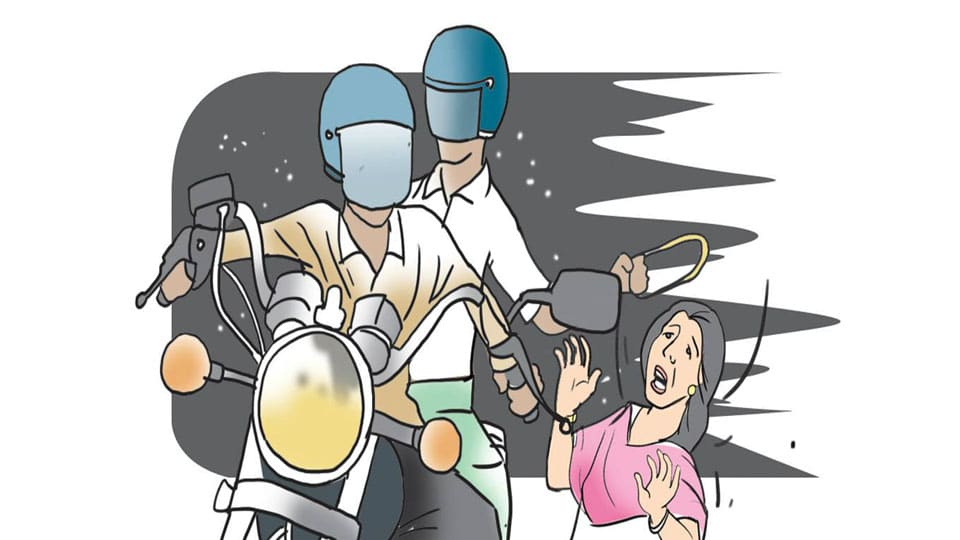 No Holi-day break for chain-snatchers:Target two women at Brindavan Extension and Gokulam

The festival of Holi celebrated in the city yesterday became a boon for chain-snatchers who managed to yank off gold chains from two women.

The youths, who came in a bike had colours all over their faces and the victims as well as passers-by could not identify them.

The first incident took place at Brindavan Extension where the chain-snatchers targeted 60-year-old Sundaramma and snatched her 60-gram gold chain. She was standing in front of her house in the evening when two bike-borne youths, with Holi colours all over their faces and clothes, approached her asking for an address.

After the woman’s attention was diverted, the person who was sitting pillion snatched her chain while the rider who was revving up the bike sped away. Metagalli Police have registered a case.

In another incident, Nagaveni, a resident of Gokulam, was targeted and her 40-gram chain was snatched. She was walking on the road when the incident occurred.

According to the Police, a few residents of Brindavan Extension had seen the bike-borne youths roaming in the area in the evening. The residents did not alert the Police as they assumed that as it was Holi, the youths might be looking for their friends to apply colour. Only when the Police came to the area after the incident they realised that the bike-borne youths were chain-snatchers.

Deputy Commissioner of Police (Crime) N. Rudramuni told Star of Mysore that residents must alert the Police if any suspicious vehicles and strangers come to their area. As the Police cannot be at every place and at every time, residents must be alert. He also appealed to women not to wear valuables when they venture out of their houses.

Brindavan Extension Gokulam
Winners cheer, losers sulk, but what real difference do elections make to our anarcic democracy?
Mysuru: A plan for the future