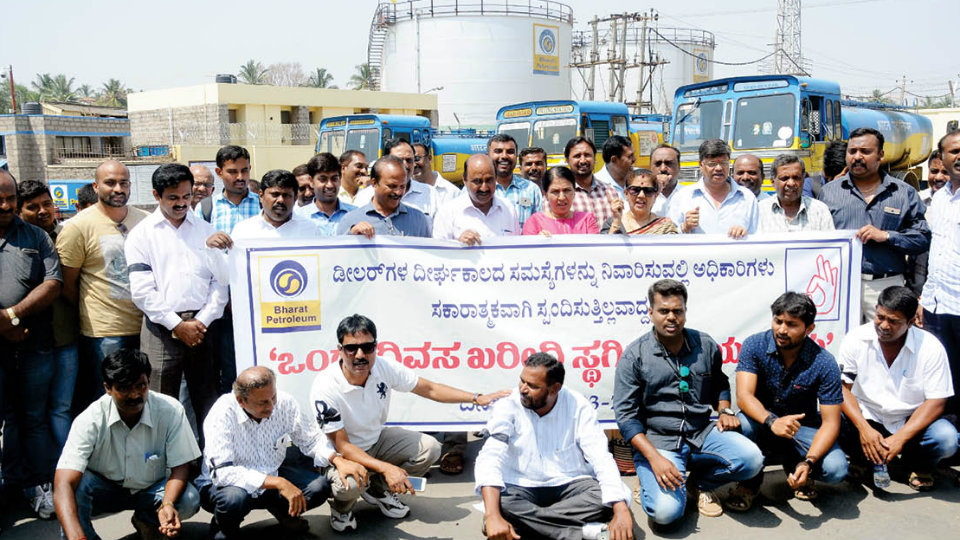 ‘No Purchase’ stir by BPCL dealers

The Mysuru Region Bharat Petroleum Dealers’ Association, which had decided not to purchase fuel stocks today to urge the authorities of Bharat Petroleum Corporation Limited (BPCL) to resolve their pending demands, launched a one-day ‘No Purchase’ stir besides staging a protest in front of BPCL Depot in Metagalli here this morning.

BPCL dealers from Mysuru, Mandya, Chamarajanagar, Kodagu, Hassan and Ramanagaram, along with members of Federation of Mysore Petroleum Traders numbering about 150, staged a protest in front of BPCL Depot by wearing black arm bands and shouting slogans against the high-handedness of BPCL authorities.

Speaking on the occasion, Mysuru Region Bharat Petroleum Dealers’ Association Working President S. Govindarajan said that many BPCL dealers were at loss due to diesel leakages, seepage of water into the underground storage tanks, non-reimbursement of Stamping fee and Municipal taxes, not waiving off the interest charged on loads given on bank holidays and not providing arrears of KSRTC transport differences to transporters among other issues.

He alleged that despite paying Real Time Growth Settlement (RTGS) amount for 70 loads yesterday in order to keep stock of fuels so that public would not be inconvenienced, the BPCL authorities deliberately issued only eight loads as against 70 loads for which the payment of about Rs. 13.5 lakh per load for 20 KL was done yesterday.

Meanwhile, Ranjit Hegde, General Secretary of Akhila Karnataka Federation of Petroleum Traders, speaking to SOM, said that after one year of continuous correspondence with BPCL authorities to solve the problems of BPCL dealers went in vain, the dealers were staging the stir to get the problems resolved.

He also said that though the dealers have good respect in the society, the BPCL authorities were not giving respect to the traders besides harassing them (dealers) and alleged that they were threatening the dealers to buy stocks today in order to stall  their protest.