Home » Columns » Abracadabra By K. B. Ganapathy » A Dialogue with a Mandya Man 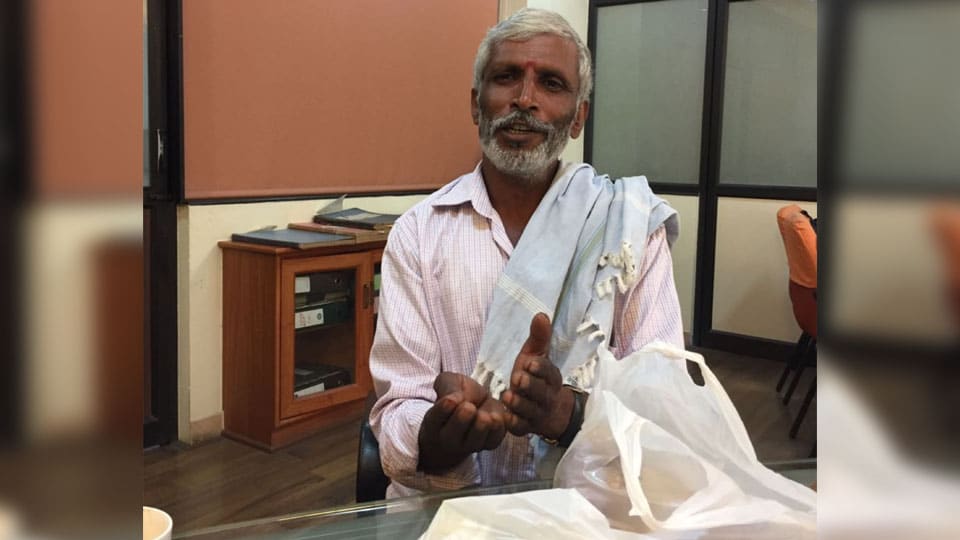 A Dialogue with a Mandya Man

My experience tells me that every day is a renewal of life. Its experience is different from the previous day’s. Such an experience came my way on Wednesday 22nd March, 2017 when I met one Damadahalli Swamygowda Chandrashekaragowda (D.S. Chandrashekara) of Mandya district. He was 53-years-old.

Lewis Carroll says in ‘Alice in Wonderland’, a picture is worth a thousand words. Hence, I am producing this man’s picture here instead of indulging in the play of words to describe him. To me he looked fit as a fiddle for his age and surprisingly he calls himself a coolie. His physique seems to have been made for the very kind of the physical labour he is engaged in. Every day he works as a “coolie” at APMC Pandavapura and K.R. Pet to load lorries with tender coconuts. He tells me this labour of his gets him on an average Rs. 1,000 a day and he is happy.

But let me begin from the beginning. I go to Office at my pleasure which is around noon. This Chandrashekara came to my office at 8.30 am sharp only to be told of my erratic timing. Not wanting to waste time, he took an autorickshaw and went to meet Rajashekar Koti, the Editor of Andolana.

Even as I was driving into my office there came Chandrashekara getting down from an autorickshaw. As soon as I was free, I called him in. He gently entered my chamber holding two plastic bags and stood there with a mild wonder on his visage. He was either silent or speechless. I asked his name. He seemed a bit confident now and said his name was Chandrashekara and he came from K.R. Pet adding that he was working as a coolie.

I asked him to sit down. Now he seemed more confident of himself. The one who was reticent in the beginning turned out to be a man of eloquence. Since he seemed too transparent, honest, outspoken sans hypocrisy or any complex, I decided to engage him in a long conversation. Indeed it was a great revelation for me about the sons of soil belonging to Mandya and Hassan districts. He literally opened his biography — from birth till the time he was before me, aged 53 years!

I was like an advocate for the prosecution, cross-examining a defence witness that he was to me. Since he was using many english words in his conversation, I asked about his education. He said 4th Standard. “Did you pass 4th Standard?” I asked. He smiled and said he did not remember. “Where did you learn english then?”, was my question. He laughed a little louder and said in a typical Kannada style: “Oh that…Butler English Sir.” I asked the meaning of the word Butler and surprisingly he said that it was the english picked up from the Englishmen in olden days by the natives and “I picked some english words by listening to people like you.”

I was taken aback when he told me that it was Raja Ram Mohan Roy who brought english to India, etc. When I asked him how he knew Raja Ram Mohan Roy’s name, he said that he was a regular reader of Prajavani. I was tempted to ask his caste. He said that he belonged to Gangatkar Gowda and rattled of his family history. Born at Damadahalli, near Pandavapura, with over half-a-dozen siblings, his father had some property of which he had inherited 30 guntas. He left his father’s house for the reason of marrying a girl from K.R. Pet on the tradition of “adoption.” This is the word in english which he used. His wife being the specially-abled only child, he had to stay at K.R. Pet in his father-in-law’s house. He was given Rs. 11.5 lakh by his father-in-law but he squandered it by helping his friends and in racing.

Having gone through the grind of a new adopted family for decades, he fell out of his father-in-law on moral grounds and his father-in-law had lost all his property. Now he lives in a small house which stands on a piece of land measuring 10 guntas. From then on it was the profession of a coolie for livelihood to maintain a differently-abled wife and a daughter.

His father-in-law died at the age of 94 and he says people in the village live longer because they eat ragi balls and soppu saaru and also meat on a regular basis. They rarely eat sweet-meats like people in the urban areas. He said since he has no agricultural land, he is given the “Anthyodaya” card by the State Government through which he gets 28 kgs of rice,  for a month for a family of 4 members and 1 kg oil, 1 kg salt and one kg ‘hesaru kaalu’ (green gram).

As our conversation progressed he made many intelligent observations about politics and politicians. For example, he said if the government fulfils its election promises then there would be no need for the MLAs to put pressure on the government to deliver the promise nor for a common man like him to keep visiting the MLA’s house.

According to D.S. Chandrashekara Gowda, in Karnataka, as he knows, it was H.D. Deve Gowda who for the first time brought the government close to the people by waiving off the farmers’ loans and interest. He also mentioned how people resonate to the conduct of their MLAs and gave the example of one Kempegowda of Chinakuruli who had won elections three times consecutively. However, when there was a contest for Chief Ministership between S.R. Bommai and H.D. Deve Gowda, MLA Kempegowda, instead of supporting H.D. Deve Gowda, supported S.R. Bommai. People were very unhappy about this betrayal of one Gowda by another Gowda. The result was H.D. Deve Gowda supported C.S. Puttaraju in the following election and made him win defeating Kempegowda.

He also spoke of social life of people in his village. It appears about 60 persons came together and set up a “Sports Club” at K. Bettahalli, Pandavapura, contributing Rs. 60 each. The Club was doing well with members playing cards but after six years, some members felt that it was better to close the Club and donate over Rs. 1 lakh the Club had to a local Lakshmi Devi temple. I asked him if he knew Justice C. Shivappa who also lives in Pandavapura. He said he had heard about him but not seen him. He knew that he lived in “Srishaila”, a place where he had built a temple.

What is the opinion of local people about Shivappa?, I asked. His instant response was in the negative. “People here are unhappy with him because he did not help in solving the Cauvery river water dispute.” I told him that Justice Shivappa was in no way involved in this problem and it would be wrong to blame him. Chandrashekara’s reaction was, “How will people  understand all this. They think he is from Mandya district and a big man. So, he should have used his position and helped.”

READ ALSO  Dr. S.L. Bhyrappa: A legend in his own lifetime among novelists —1

By now I had spent a long time with Chandrashekara and wanted to come to the purpose of his visit. He said, he is holding, at his own cost, a programme called “Hosabelaku Karyakrama” on the Ugadi day (29th of this month) between 8 am and 10 am at Yelekere Hand Post, K.R. Pet Main Road and he wanted me to be the chief guest along with Rajashekar Koti. Saying that it was not necessary to bring the flower and fruits, I asked how much he paid. Trying to avoid an answer he said he had carried the same token of honour to Rajashekar Koti also. On my insisting he said each garland cost Rs. 60 and fruits Rs. 120. “How did you come here?” was my next question. He said he took an auto from the bus stand.

His answer was a short narrative. “When I told the auto driver that I wanted to go to Bannimantap, Mysooru Mithra Office, he said Rs. 120. But I told him, ‘See, I have not come to bargain with you. You take me to Bannimantap’ and got into the autorickshaw. He dropped me here and I gave him Rs. 100. He did not say anything. But I asked him, ‘Is it okay or you want more money?’ He smiled and went away.”

Chandrashekara said that he would be distributing sarees to 100 poor women at that programme and each saree might cost Rs. 350. I asked him how he could spend so much money when he has only one source of income as a coolie. He said he has contributed to a 16-month chit fund for Rs. 50,000 and he will take the money from there. He volunteered to say that yesterday he had collected his Rs. 900 wages as coolie and wanted to meet me and Rajashekar Koti. While he was in the bus, he called his friend Satish, asking him to bring Rs. 5,000 and Satish had brought instead Rs. 20,000 and given to him. Curiously, Chandrashekar lifted his shirt, dug his hands into his underpants and fished out a wad of Modi’s new Rs. 2,000 notes. It was intriguing for me that when asked to bring Rs. 5,000, his friend brought Rs. 20,000. Well, the cat was out of the bag. He had taken money from his chit fund, gave it to his friend Satish to help him and he was simply returning it.

As he was walking out of my office, I asked him why he should do  this instead of saving money for himself and his family. His innocent reply was, “Naanu nanna thathva siddhanthakkagi badukalu Ichchisuttene.” (I wish to live according to my ideals and principles).