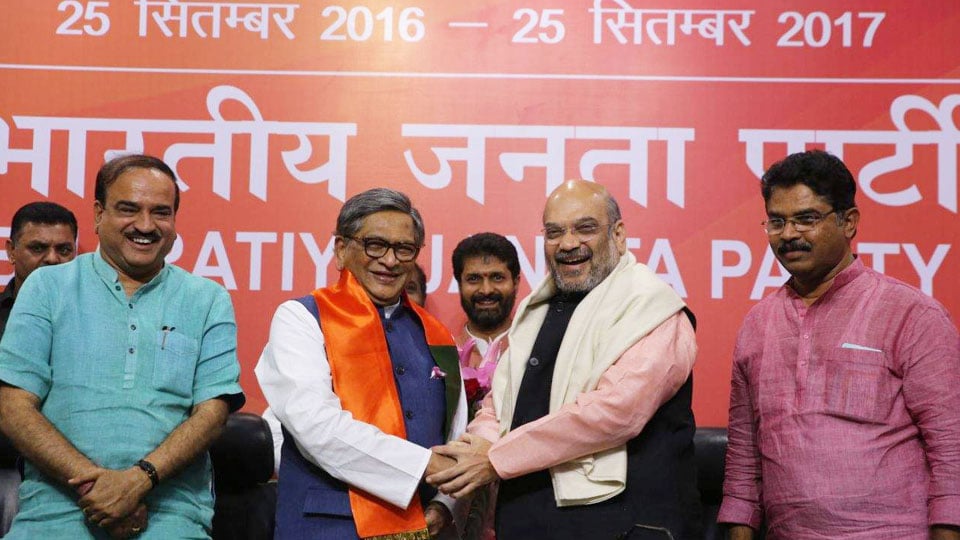 In preparation for next year’s key battle in Karnataka, the Bharatiya Janata Party (BJP) yesterday inducted former Karnataka Chief Minister S.M. Krishna, who had quit the Congress in January. Krishna joined the BJP in the presence of the party’s National President Amit Shah.

“I am humbled today that I am joining the party which was led by great leaders. I see a great India emerging under the leadership of Prime Minister Narendra Modi and ably supported by the party President Amit Shah,” Krishna told reporters. Heaping praises on Modi and Shah, Krishna said that the two leaders “have taken the country to great heights and this is not an exaggeration.”

Recalling his association with former Prime Minister Atal Bihari Vajpayee and senior leader L.K. Advani, Krishna said, “I am deeply honoured as I am joining a new party and I will work for its cause.”

The 84-year-old Krishna, who had been one of the close aides of Indira Gandhi and Rajiv Gandhi and held key posts at the Centre and State, had been hurt that many in the party’s State unit considered him a spent force  and sidelined him.

With Krishna joining it, the BJP is looking to regain Karnataka, which it lost in 2013. The party is now trying to improve its strength with the induction of leaders from other party — a strategy that has served it well in the elections in Assam and Uttar Pradesh.

Amit Shah said that Krishna’s joining BJP is a message to all honest politicians that they should strengthen the hands of Prime Minister Modi. Terming Krishna’s decision to join the BJP as a “timely one,” Shah said, “Krishna is joining the party after witnessing change in the country since Modi became the Prime Minister. Since then the party’s acceptability across the country has gone up.” Shah said Krishna’s presence will increase the party’s strength not only in Karnataka but across the country.

Though Krishna said that he was not expecting any post in the organisation, Shah said that the party will give him “due respect” keeping in mind his seniority.

Krishna quit Congress charging that the party had ignored his seniority and experience.Krishna said that he would continue in active politics.

He said that he did not ask for any posts for any of his family members, including his daughter or son-in-law. These were just rumours, he said.

Krishna is seen as an influential leader in Bengaluru, which acts as a decider with three Lok Sabha seats and 24 Assembly seats. He is also extremely popular as a leader of the powerful Vokkaliga caste in Mandya, Mysuru and Tumakuru region, seen as the caste stronghold.