Home » News » BJP up in arms against State Government 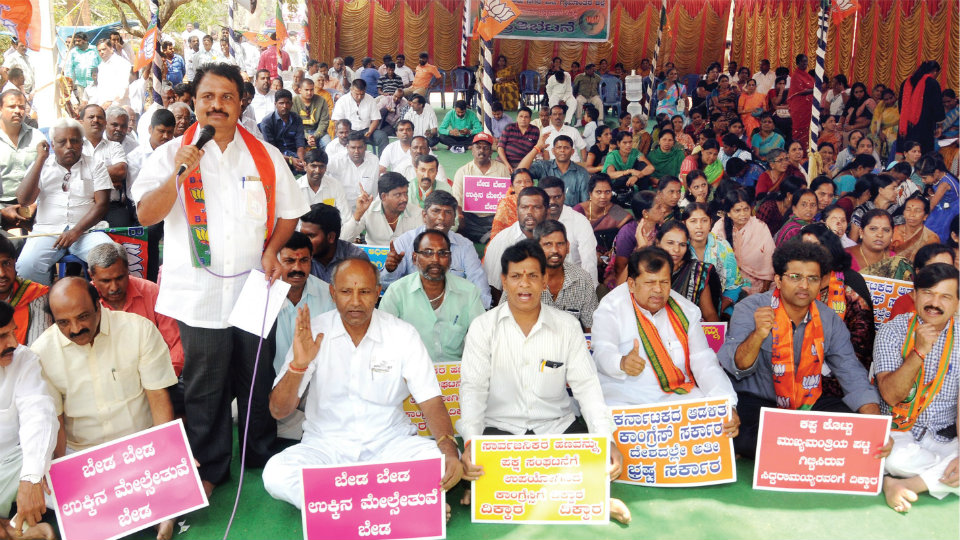 BJP up in arms against State Government

Hundreds of activists of the Bharatiya Janata Party (BJP) today staged a protest in front of the Deputy Commissioner’s Office in city as part of their State-wide protest against the ruling Congress Government for corruption and misrule and to condemn the statement of senior Congress leader Mallikarjun Kharge referring to BJP members as ‘dogs.’

Observing that a dog was one of the most sincere animals on earth, they accused the Congress party of not being anywhere near sincere in following their own principles by making a mockery of democracy in all its activities.

They alleged that the Congress has floated a fake CD to cover up the fact that Chief Minister Siddharamaiah has paid money to the High Command to cling on to the post thus misleading the people of Karnataka.

Former Minister  S.A. Ramdas, speaking on the occasion, said that the BJP was committed to free Karnataka from Congress in the 2018 Assembly elections.

At Bengaluru: Repeating his allegation that Siddharamaiah had paid money to the Congress High Command to cling on to CM’s chair, State BJP President and former Chief Minister B.S.Yeddyurappa  said that it was not important as to how he accessed the diary seized by IT and ED  but asked “will Siddharamaiah quit politics if the charges were proved?”

Addressing party workers at the protest being staged against the Congress Government as part of its Statewide protest in Bengaluru, Yeddyurappa said that he would quit active politics if his allegations against Siddharamaiah on payment of money were not proved.

He also challenged the Siddu government that he would expose all the corrupt activities of the government with 24 hours after coming to power in 2018.