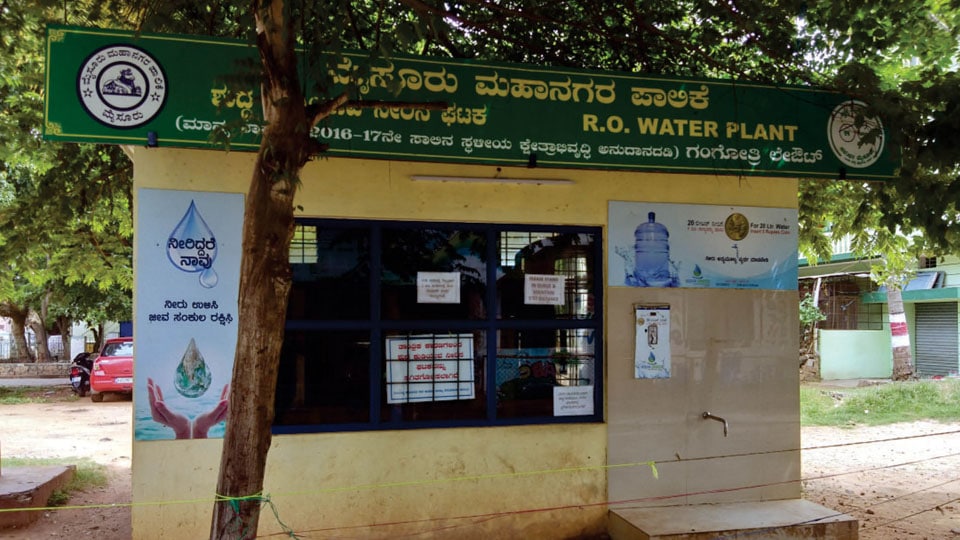 Mysore/Mysuru: The pure drinking water unit at Gangotri HUDCO Layout, which has become non-functional for the past 20 days, has severely inconvenienced the residents.

The drinking water unit was set up at 8th Cross of Gangotri Layout at a cost of Rs.10 lakh under the Local MLA Grant in 2017-18. But the unit became non-functional due to a mechanical fault over 20 days ago and the authorities have not bothered to get it repaired.

While the MCC has launched a campaign asking the citizens not to unnecessarily venture out on to the streets in the wake of COVID-19 spread, the residents of the area are forced to come out of their homes in search of potable water in surrounding areas.

With the unit becoming non-functional, the residents are inevitably buying 20 litre water cans at a cost of Rs.30. Residents allege that although they have been complaining about the non-functioning of the unit, the MCC authorities have not bothered to get it repaired.

Local Corporator Vedavathi said that the drinking water unit had borewell connection. But as the borewell water was deemed unfit by the authorities for drinking, the unit was stopped.

The unit will be re-charged  by getting it pipeline connected to a borewell in Bogadi in the next 10 days, she said.