Home » News » Not a resurvey, clarifies Commr. of Survey 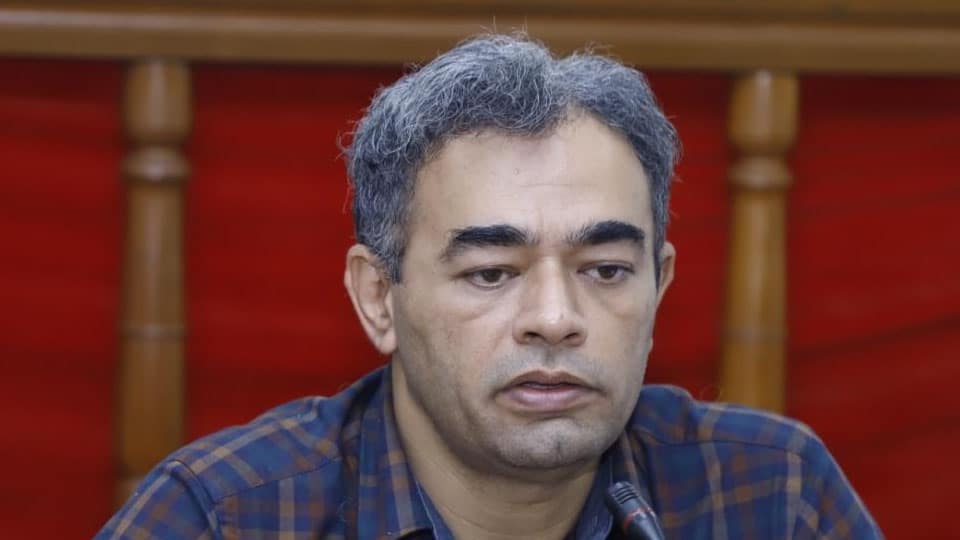 Not a resurvey, clarifies Commr. of Survey

Mysore/Mysuru: Minister for Co-operation S.T. Somashekar, who has questioned the need for Commissioner of Survey, Settlement and Land Records Munish Moudgil to order a re-survey of certain parcels of land in and around Mysuru particularly the land on which the SaRa Convention Hall has been built, has spoken against a high-level officer in his own Government.

“The land in question has already been surveyed by the Regional Commissioner of Mysuru Dr. G.C. Prakash following allegations of land grabbing levelled by former Deputy Commissioner of Mysuru Rohini Sindhuri against JD(S) MLA S.R. Mahesh who’s wife owns the Convention Hall. Who gave Munish Moudgil the authority to survey it again?” Somashekar had questioned at an event in Mysuru and Chamarajanagar yesterday.

Based on a petition filed by an activist demanding a comprehensive survey of Government lands, Moudgil ordered a survey of certain parcels of land at Kergalli, Yedahalli, Dattagalli, and Lingambudhi villages by a three-member team of officials citing a complaint by a resident of Kuvempunagar in Mysuru about encroachment of Government land. The order to survey asked the team to submit a report in 10 days.

Reacting to the Minister’s outbursts, Munish Moudgil has clarified that the survey that he had ordered is not a re-survey. “Allegations of multiple irregularities were made previously in writing. The enquiry ordered by the Regional Commissioner was on a single specific issue, whether the ‘Rajakaluve’ is encroached or not. All other allegations like encroachment of MUDA land and irregularities in resort approval in lake buffer zone were not enquired into,” he stated.

The activist had urged Munish Moudgil to initiate action against multiple irregularities and illegalities over land encroachment on survey number 123 of Dattagalli village in Kasaba Hobli in Mysuru taluk. He alleged that it was a gomala land and no proper documents of land grant are available.

In addition, the land conversion on survey number 124/2, Lingambudhi Village at Kasaba Hobli in Mysuru taluk for 1.39 acres was contrary to the Comprehensive Development Plan (CDP) of Mysuru City and Rohini Sindhuri had cancelled the same. The activist alleged that in survey number 10 next to Lingambudhi Lake, a resort is  being planned in violation of the Supreme Court and Government guidelines.

“The petitioner has been specifically asking for enquiry on all points and not only the single point at the behest of one person. Hence, a comprehensive fact-finding survey as regards allegations of encroachment has been ordered. It’s a falsehood that the survey enquiry — already completed under the directions of the Regional Commissioner — is being repeated,” he clarified.