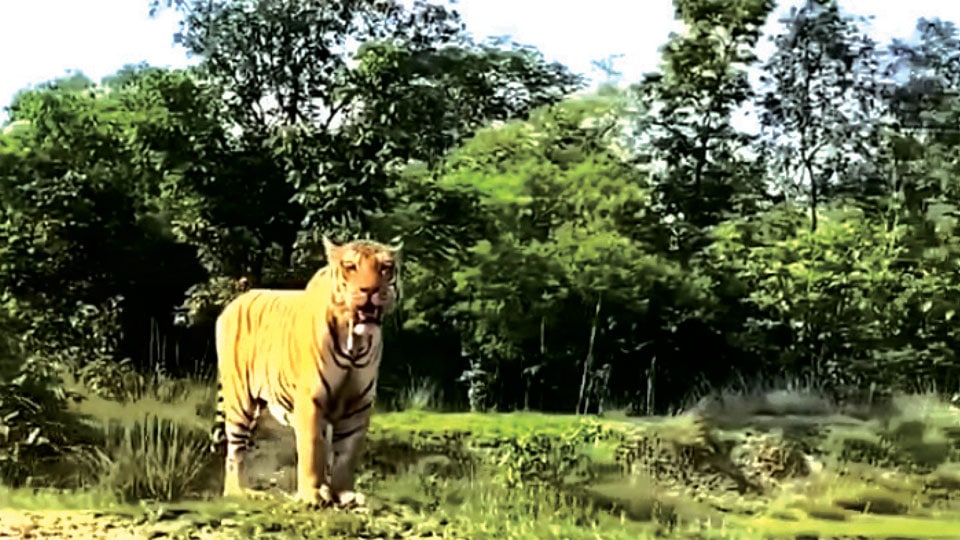 Not Bandipur’s ‘Mayar King’ but ‘Mystery Male’ from Maharashtra

Mysore/Mysuru: A video clip of a male tiger walking majestically inside Bandipur Tiger Reserve has gone viral on the social media. But the fact is that video is not from Bandipur but from Chorbahuli Zone which is in the Maharashtra part of Pench National Park.

The video has received many “wows” on social media with thousands of views. A section of newspapers had reported that the tiger has been spotted in the core area of Bandipur and it is around six to eight years of age. The reports said that Forest Department has named it as ‘Mayar King’.

The reports indicated that this tiger is set to take the place of Bandipur’s ‘Prince’ who died last year. Prince, who ruled Bandipur for about 12 years, was the favourite among tourists and photographers as he would come very near to the safari vehicles and give poses to shutterbugs for a long time.

In fact, the huge husky feline from Pench is named “The Mystery Male Tiger” from Chorbahuli Zone. Speaking to Star of Mysore, wildlife photographer, conservationist and a big cat specialist Amal George said that the video of the Chorbahuli Mystery Male was shot by Advocate Neelesh Sharma from Nagpur. In a Facebook video post, Neelesh Sharma said that on the evening of July 18, he spotted the big cat. “When on a drive and suddenly the King appears,” he posted.

Amal George, who has innate knowledge about tigers in Bandipur and Nagarahole Tiger Reserves, humorously questioned how ‘Mystery Male’ from Chorbahuli could come to Bandipur in this lockdown period.  Pench tiger Reserve is one of the premier tiger reserves of India and the first one to overlap across two States — Madhya Pradesh and Maharashtra. This particular tiger is regularly spotted at Chorbahuli Range, over 40 kilometres from Turiya Gate.

“The ‘Mayar King’ is too fictitious to believe. We remember a story told by Bandipur oldies that we had a tiger named ‘Moyar King – Agaysta’ who died long before,” he added.