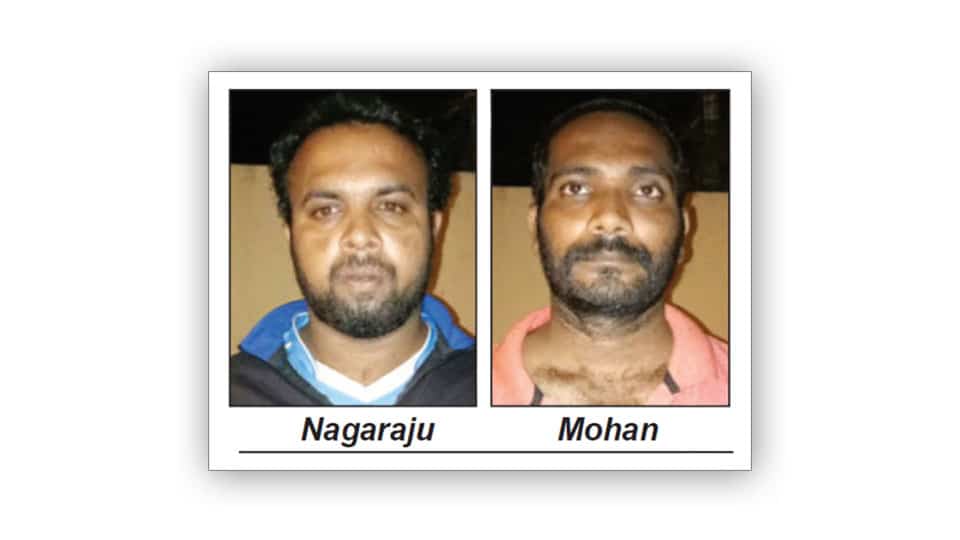 Mandya; Mandya Police have arrested two rowdy-sheeters for plotting extortion and dacoity and also seized a country-made pistol and machetes from them.

The arrested rowdy-sheeters have been identified as Nagaraju and Mohan.

On Oct. 20 night, Nagaraju and Mohan, who had planned to extort money and commit dacoity, were proceeding in a car on Old MC Road in Mandya when Circle Inspector Santosh Nagaraju and SI Niranjan, who were on night beat, intercepted the car.

On checking the car, the Police found that the duo were carrying a country-made pistol and machetes and took them into custody. During interrogation, the two rowdy-sheeters are said to have told the Police, that Nagaraju had bought the country-made pistol for Rs. 30,000 from one Rangaswamy, an Excise Contractor and a rowdy-sheeter. But the Police are yet to ascertain from where the pistol was brought from as Rangaswamy had  committed suicide.

Meanwhile, SP Radhika said that the Police have come to know why Nagaraju had bought the country-made pistol. She said that Nagarju’s brother, also a rowdy-sheeter, was brutally attacked by his rivals and is now recovering in the hospital.

As Nagaraju feared that the gang may also attack him, he is said to have bought the pistol but was using it to commit extortion, dacoity and other crimes.

Nagaraju and Mohan were produced before a Court, which has remanded them to Judicial custody, according to sources.

Meanwhile, the Police, who are investigating into the matter, are suspecting that more such weapons may have been brought to the town.