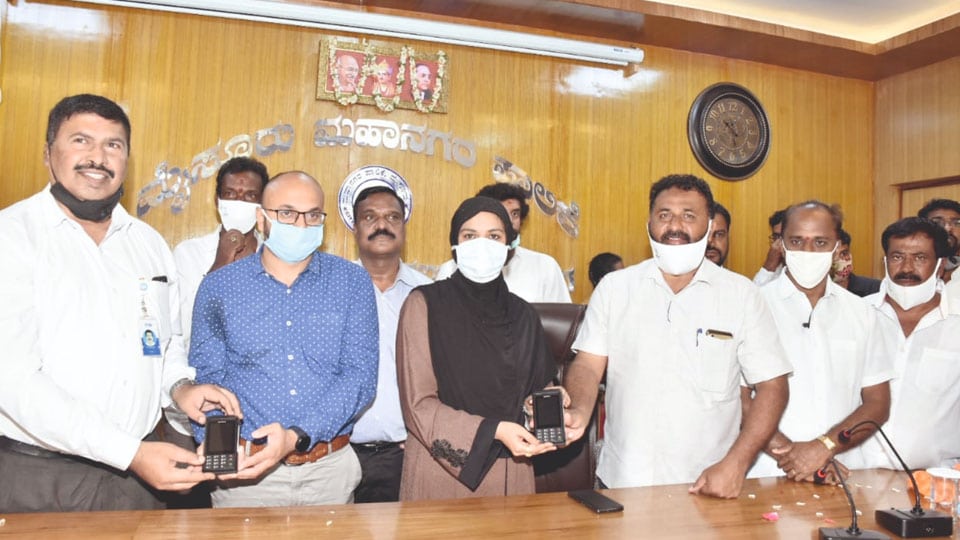 Now pay water tax at comfort of your homes

Eight dedicated vehicles, two for water tax collection and six for water supply, modified for this purpose, were inaugurated by Mayor Tasneem by cutting the tape at the VVWW premises this morning. Also, an auditorium at the VVWW premises, which was renovated at a cost of Rs. 26 lakh, was inaugurated on the occasion. MCC Commissioner Gurudatta Hegde, VVWW Executive Engineer P. Nagaraja Murthy, Corporators M.U. Subbaiah, Pailwan Srinivas and B.V. Manjunath, SBI MCC Branch Manager Lin Ramachandra and others were present.

To avoid gathering of public at service centres to pay water tax and to mop up revenues in COVID times, the MCC has purchased the two vehicles exclusively to collect pending water tax dues that stands at a whopping Rs. 180 crore.

Named Cauvery and Kabini, these vehicles are equipped with Point of Sale machines so that water tax can be collected and receipts issued on the spot. People can use debit/ credit cards or cash to pay the tax at the comfort of their homes. The facility is provided by SBI MCC Branch.

Each vehicle can carry eight persons from the VVWW and if the dues are pending since a long time, such connections will be disconnected. A defaulter list has been prepared and armed with the list, the vehicles will land at doorsteps of citizens to collect dues.

A few areas in city face perennial drinking water problem and there is neither a scope of establishing RO (Reverse Osmosis) plants nor supplying water daily as the roads are very narrow. Areas like Udayagiri, Shanthinagar, Kalyanagiri, Rajivnagar, Lingambudhipalya, Nachanahallipalya and surroundings of J.P. Nagar face perpetual drinking water problem.

Though the MCC supplies water to certain areas, the huge water supply vehicles could not reach the tail-end consumers due to bad and narrow lanes. Also, there are no designated places for the MCC to set up RO plants like they have established in other areas despite huge demand.

To ease the problem, the MCC has customised six Tata Ace Mega vehicles and have mounted mini RO plants on them. Each vehicle can carry 1,000 litres of pure drinking water to any nook and corner of Mysuru city and even criss-cross in the narrow lanes and bylanes. Door-to-door drinking water delivery is achieved through these vehicles and people can fill water to their containers at homes.