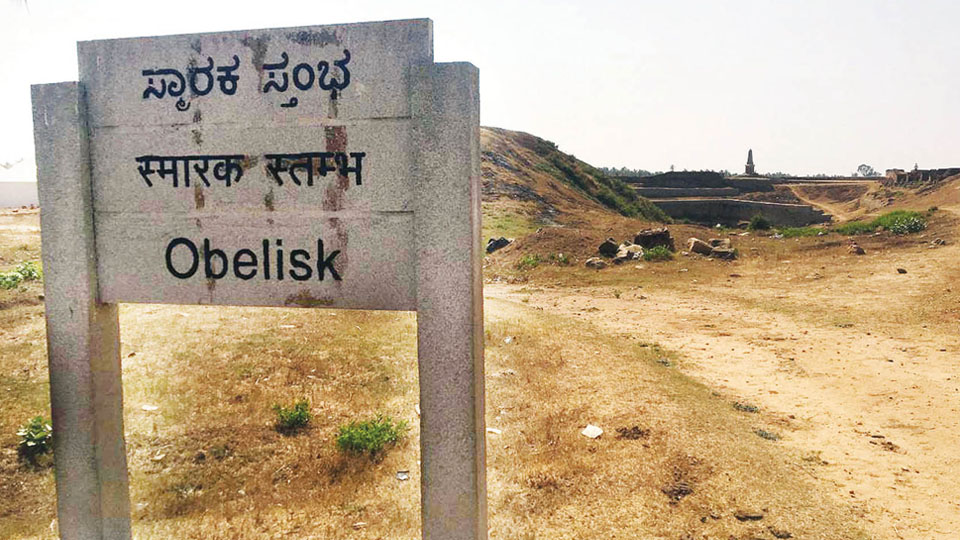 Obelisk, a forgotten monument at Srirangapatna

I recently visited Srirangapatna, near Mysuru. On the western most corner of Srirangapatna Fortress lies a War Memorial commemorating the Victory of the British over Tipu Sultan in 1799. It’s not on the usual tourist circuit for Srirangapatna. Nothing very unusual, one might say. However, a close look at the Memorial (now marked by Archaeological Survey of India – ASI just as an Obelisk) reveals much more.

The Memorial was built by the Government of Mysore during the reign of Nalwadi Krishnaraja Wadiyar in 1907, to celebrate the defeat of Tipu in 1799. What prompted the Maharaja to celebrate this occasion, that too more than a century after the battle? One can only imagine that this was done as a mark of gratitude by the Wadiyars for getting back their throne. This may also explain the reason as to why locals are not too keen to show this to tourists.

Amongst the dead from the British side are more than a hundred ‘natives’. The Obelisk notes 108 Killed, 385 Wounded and 97 Missing from the “Native Troops”. They were from both, Bombay and Madras Presidencies.

Military historians note that this was the first time that both the Presidencies had to fight a battle together to defeat any Indian ruler. There are many Indian Army Regiments which draw their lineages from the British Indian Army and a few of them do count Srirangapatna as one of the Pre-Independence Battle Honours. These are not officially recognised anymore because they were against Indian Rulers.

Notably, Tipu had upset his relations with all his neighbours due to his constant expansionist policies. Marathas, Nizam, Malabar and Coorgies (Kodavas) all assisted the British in this War.

READ ALSO  Political defections at Srirangapatna: Who will be the next MLA?

I don’t know how many such structures survive in India today, but there are many amongst us who may look at these with discomfort due to the entire Native versus Local aspect. We should not be in a hurry to ignore these stories (or brush them under the carpet) for they tell us so much about the real socio-politico military reality of India in those days.

The Obelisk stands at the centre of an expansive and concentric series of steps, on a high point close to the fort walls. The four plaques fixed on the square base are inscribed with various details. Above the base structure is a conical projection supported by four cannon balls. Another canon ball is fixed at the very top too.  The inscription on one side reads  “This monument is erected by the Government of Mysore in 1907 in order to commemorate the siege of Seringapatam by the British forces under Lieutenant General G. Harris and its final capture by assault on 4th May 1799, as also the names of those gallant officers who fell during the operations.”

The next side is a corps wise table that lists the number of soldiers and officers wounded, killed or missing for the siege (4 April to 4th May 1799). The final tally reads as Killed-192, Wounded -657 and Missing -25. So that’s the official version of the damage the British corps suffered at Srirangapatna.

The other two sides list the rank, name and the regiment of the European officers killed.

Though it is not very difficult to access, Obelisk is not as frequented by tourists as other nearby attractions in Srirangapatna. Historically this sits on a very eventful place during the siege of Srirangapatna.

2 COMMENTS ON THIS POST To “Obelisk, a forgotten monument at Srirangapatna”