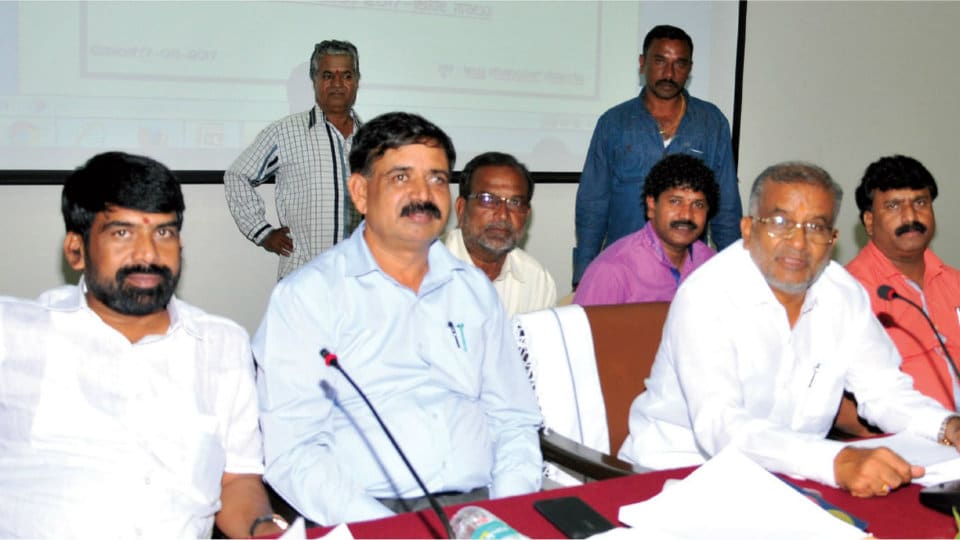 ‘Officials must ensure payment of crop loss compensation to farmers’

Mysuru: Expressing disappointment over the delay in payment of crop loss compensation to farmers, Chamundeshwari MLA G.T. Devegowda has directed the Agriculture Department officials to pay full compensation to the affected farmers.

Speaking at the Taluk Panchayat progress review meeting at ZP Hall here on Thursday, G.T. Devegowda said that the officials should identify all the farmers who are yet to get Aadhaar linked and to take measures for linking them with Aadhaar within a week.

The MLA directed the Food Department officials to cancel the licenses of such Fair Price Shops where there are a high number of ration card distribution pending.

The MLA sought to know details of supply of drinking water through tankers in villages, to which the Irrigation Department officials said that 23 villages in the taluk are still being supplied water through tankers due to scanty rains. Devegowda also asked the officials to come up with statistics on the borewells dug, failed borewells, number of handpumps, power bill dues, etc.

Food and Civil Supplies Department official Vijayalakshmamma said that Chamundeshwari Assembly segment had received 10,766 applications seeking ration cards of which 4,030 applications are under scrutiny. The rest of the applications will be disposed off in the next stage, she said.

Upset over the absence of a number of officials at the meeting, the MLA asked TP EO Lingarajaiah to suspend Village Accountants and PDOs who abstained from the meeting.