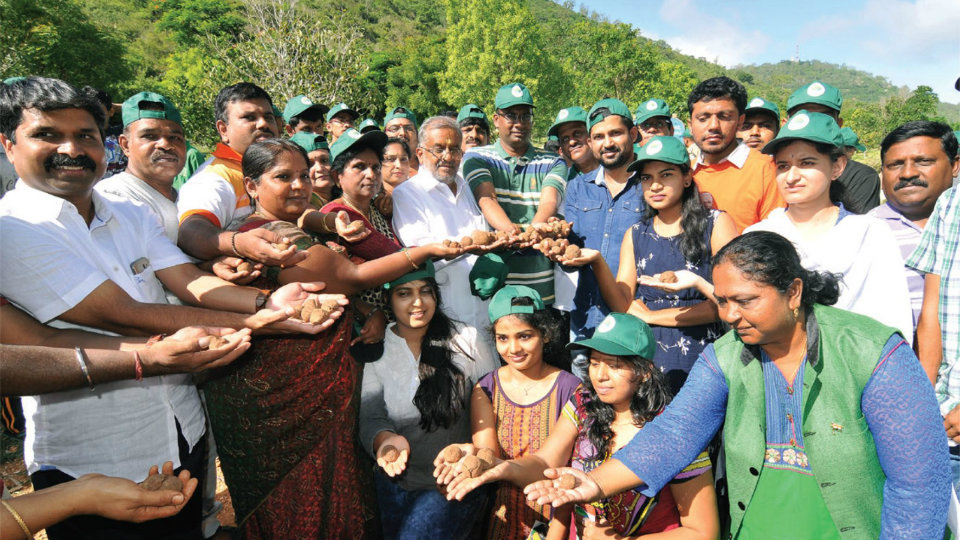 Mysuru: On the World Environment Day yesterday, the iconic Chamundi Hill witnessed a ‘Seed Ball Bombing’ where more than 3,000 Seed Balls were planted. They were planted in and around the Chamundi Devi Vana at the foothills.

The event was organised by the Mysuru District Administration, Forest Department and a group of NGOs led by Clean Mysuru Foundation.

According to Clean Mysuru Foundation, the objective of seed ball planting is to create an evergreen canopy around Chamundi Hill at a faster rate by promoting mixed tree culture that can provide shelter to many small animals and birds for natural growth of trees in future.

By creating green canopy of shrubs and plants in Chamundi Hill environs, soil fertility can increase along with improving soil moisture capacity. It can also fight against the local/global climate change happening at a faster pace.

The Foundation has nearly 70,000 Seed Balls ready for sowing and it has a long-term objective of planting at least 5 lakh Seed Balls in and around the Hill to increase the green cover. President of the Foundation Dr. C.G. Betsurmath said that they had set a target of readying 5 lakh seed balls before the end of monsoon.

Seed Ball culture is a natural process of in increasing the green canopy in urban environments at all open places. Once the Seed Ball germinates, it does not need any care for its growth and is able to adjust naturally creating a sustainable/natural forest growth.

As the success rate of Seed Ball propagation is around 50%, the Clean Mysuru Foundation is associating with other organisations and institutions to achieve 80% success rates by inserting the Seed Ball in a 4-inch pit and covering the Seed Ball with surface soil after placing them. Seed Ball clouding or throwing will be done only at places which are inaccessible.

Sri Jayachamarajendra Zoological Garden held a day-long programme as a part of the World Environment Day celebrations yesterday. Students from various schools across the city visited the Zoo and took part in events organised to create awareness on many issues related to environment. They also took part in the signature campaign in which they promised to protect the environment and also create awareness.

The children also enjoyed their day spending time with ‘Chamundi,’ the one-year-old Elephant calf. They went around the Zoo with the elephant which attracted many visitors.

Zoo Executive Director K. Kamala Karikalan, who accompanied the students, explained about the animals housed in the Zoo. The students also planted saplings at the Zoo premises and also took part in the drawing and painting competition.