On April 26th 2018, the Congress party sent their old horse to Madhya Pradesh (MP) to win. Not just win but destroy the 15-year reign of BJP in that State. That old Congress horse was Kamal Nath. Rahul Gandhi, speaking of Kamal Nath said, “He is not Kamal Nath but Kamal Naash,” literally meaning Lotus destroyer, an obvious reference to decimating the BJP’s hold on India’s central State.

Yes, the Congress won, but it did not destroy the Lotus as Rahul had hoped. It was more like the Lotus wilted, thanks partly to anti-incumbency. But the credit must go to Kamal Nath’s tactics, from starting a campaign called “Chalis din, Chalis sawal” – 40 days, 40 questions. He hurled one question after another for 40 days at the BJP and at the end of 40 days, the lotus party had not answered even a single question! People noticed this and on Election Day, they gave their ‘mann ki baat’.

Also, Kamal Nath even pulled a BJP strategy. He projected Congress as being a “Hindu” party; after all, he built a 101.8-foot Lord Hanuman statue near Chhindwara, his own constituency. He then famously wrote an open letter to Lord Shiva, seeking his blessings for the people to end the BJP’s ‘misrule’ in the State. He even promised to build cow shelters in the State’s 23,026 Gram Panchayats!

Now, Kamal Nath has been declared CM. But how did Kamal Nath, who is known more for his activities in Delhi rather than MP, end up being the CM of the State? How did a man, born in Uttar Pradesh, who is from a wealthy upper caste business family based in West Bengal end up being CM of MP, a State with significant SC/ST vote bank? Or did Kamal Nath just time it well?

Because BJP had ruled Madhya Pradesh for 15 years and just in December last year Kamal Nath had said in an interview, “In elections, there is a shelf life syndrome and people are increasingly going to try out new parties. People are always looking for a change.” So did he know that his time had come to sneak in and swoop on the CM chair?

Apart from his knack to sniff opportunities like in 1987 when he got close to Rajiv Gandhi when V.P. Singh threatened Rajiv’s position, apart from his “doer” tag, apart from the fact that he has been an efficient representative for India in global trade negotiations, apart from his ability to raise funds for the party, he also has another important trait — he is a loyalist of the first family of Congress Party.

Kamal Nath entered politics through his friend and classmate, Sanjay Gandhi, uncle of his present party President Rahul. He stood by the country and free speech during Emergency, oh! Sorry… he stood by the Gandhi family during Emergency, as he himself said, “From the years 1977 to 1980, it was thought that Indira Gandhi would never return to power. We used to go to jail. When Indira Gandhi went to jail, Kamal Nath also went to jail. When Sanjay Gandhi went to jail, so did I,” And when you are loyal to the Gandhi family, there is always a reward.

And post-Emergency when it was time for elections, Kamal Nath, a man from Uttar Pradesh, and a friend of Sanjay Gandhi, was given the ticket to fight from Chhindwara, Madhya Pradesh, despite opposition from the then local Congress (I) leaders. Indira Gandhi herself went to file his nomination and famously declared that Kamal Nath was her third son. He has never looked back after that.

The same goes for the new CM of Rajasthan Ashok Gehlot. He has undoubtedly been a Gandhi family and party loyalist. When Kamal Nath won in 1980, in the neighbouring Rajasthan a young Youth Congress (I) leader Ashok Gehlot too won. In Punjab a 34-year-old Captain Amarinder Singh also won. 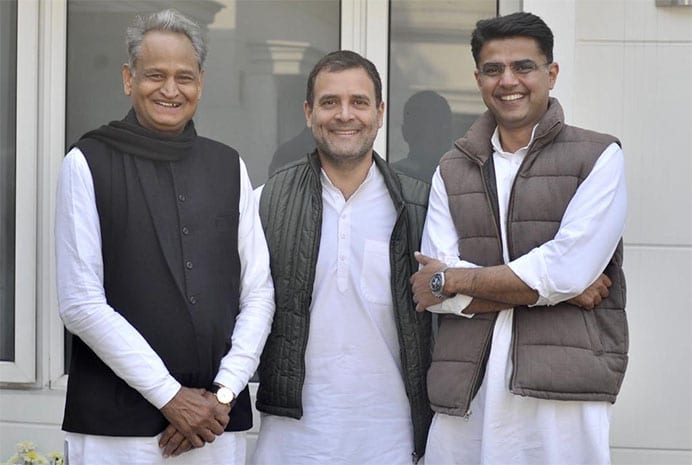 In fact, there were so many Sanjay Gandhi’s young friends in the Seventh Lok Sabha that the Opposition called them “Sanjay ke chokre” (Sanjay Gandhi’s boys). It was also called the most youthful Lok Sabha. Today, the batch of 1980 has reaped the benefit of loyalty. And herein lies the magic of the Gandhi family — a reward after a long loyalty test.

If credit has to be given to Rahul Gandhi it has to be for managing to bring the old horses and the young stallions of his party to work together. And the Congress party has shown its young party leaders that if you are loyal to the party and not a threat to the Gandhi family, you will be rewarded like Ashok Gehlot, Kamal Nath and captain Amarinder Singh. And if you don’t, then you will be sidelined like Pranab Mukherjee no matter how competent you may be.

Also, Rahul Gandhi has not shunned his senior party leaders to an old age home called “Margadarshak Mandal”. Instead, he continues to use their experience, their connections and wisdom, while giving freedom to young and ambitious politicians like Sachin Pilot and Jyotiraditya Scindia to be the generals on the ground. While also letting them know that if they want to remain politically relevant and rewarded, they should not be a threat to him.

When Kamal Nath was elected in 1980 there was a slogan doing the rounds, “Indira Gandhi ke do haath, Sanjay Gandhi aur Kamal Nath”. Well, if you lend your ‘haath’ to the Gandhi family and the Congress party, they will make sure of your political vikas.

This move by Rahul Gandhi to make the senior leaders the CMs and the young leaders deputy CMs, will make the Congress youthful and wise. This will make them stronger and if not in 2019, they will surely reap rewards in 2024 as BJP continues to wallow in midlife crisis as the party is filling up with middle-aged leaders and seniors being relegated to insignificance.

9 COMMENTS ON THIS POST To “Old Horses + Young Stallions = VICTORY”