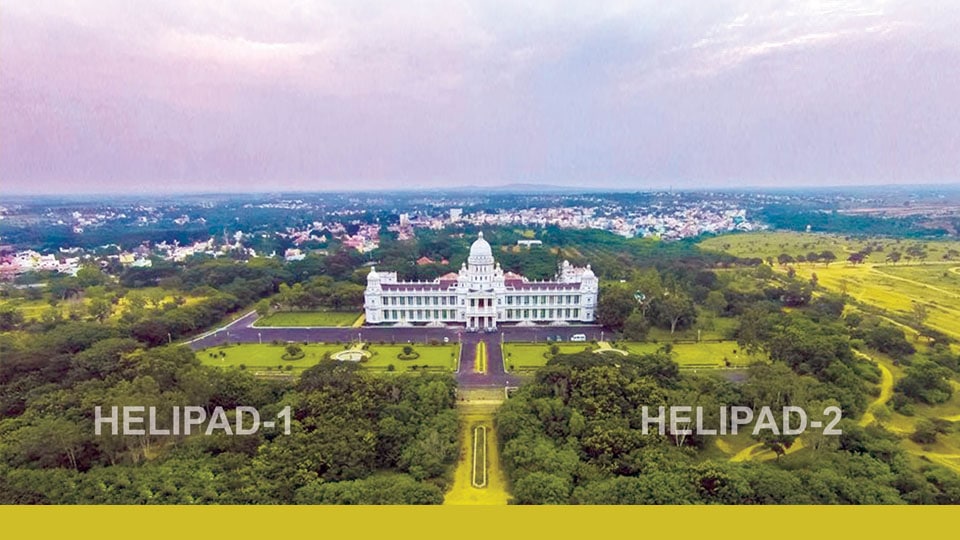 Is Mysuru a tourist city? Yes. Is tourism crucial to our city’s economy? Absolutely. So do we need Heli-Tourism to enhance it?  Why not? But…

Our Tourism Minister, C.P. Yogeeshwar, in all his enthusiasm, wants to introduce Heli-Tourism; where people can take a helicopter ride over our city and enjoy an aerial view of the Mysore Palace, KRS dam, Infosys campus…etc. But unfortunately he wants to facilitate this initiative by building two helipads while cutting down trees…lots of trees.

If anyone visits the proposed site, they will wonder why all this fuss for a patch of forest. But this patch has rich flora and fauna hiding within. Just this morning as I walked through this path I came across the rare Tickell’s Blue Flycatcher and the elegant Grey Hornbill! In how many cities can one drive for a few minutes and witness such nature’s beauty. Now, we want to destroy this for what? So helicopters can land and take off with people who want to see a city from above?

Yes, we need tourists. We need their business. But we must also realise that with tourism comes irresponsible tourists. Soon the now serene area in front of Lalitha Mahal Palace Hotel will be peppered with haphazard parking, infested with food vendors, gaudy teddy bear-sellers and a sea of plastic waste.

Why not use the existing helipads? Yes, indeed after a recent court verdict the land on which the old helipads stand now belongs to Pramoda Devi Wadiyar and not the Government. But the Government can always request  Mrs. Wadiyar to lease the helipad to the Government?

Meanwhile, we must also consider this….the Government is going in appeal and may very well win. After all, the Government has hired the celebrated lawyer Harish Salve. If the Government wins, the present helipad will come back to the Government and we will end up with five helipads next to each other!  And a rich patch of forest land would have been destroyed in vain.

This apart, the Minister and his advisors should know that the Government itself proposed to turn the proposed area into a 35-acre Botanical Park 20 years ago! And there is a reason for that.

This area around Lalitha Mahal and the foothills of Chamundi, according to Ornithologists, has over 77 species of birds and over 150 species of butterflies including the State Butterfly, the Southern Birdwing, which is the biggest butterfly in India.

So, if the Minister is sincere about creating  more tourist attractions, then  he must complete this long- pending Botanical Garden Project.

Finally, is the proposed location ideal? The new proposed helipads are right outside the Lalitha Mahal Palace, a heritage hotel. In fact, the helipads are just 300 meters away from its reception area! Will the constant vibration by helicopters not affect the integrity of the heritage structure?

Will the dust and decibel not kill Lalitha Mahal’s “valuation”? Especially, at a time when the State Government is hoping that Taj Group will take over the prestigious heritage property to not only restore it, but also turn it into a tourist attraction while generating income for the Government and the city in the form of high spending tourists?

Then there is the issue of landing. Somender Singh,  a man who has viewed Mysore from the air more than anyone, had this to say: “Having flown over Mysore more than anyone else — having landed in most open fields in and around Mysore taking pictures, here is my 2 paise advise. For Heli-Tourism with safe landings, the ideal place would be Bannimantap Parade Grounds. It is centrally located.  It is Government property. It is hardly used. It has perfect Airology & Visibility for any Heli Pilot to safely land & take off. To add, the Fire Station is located right next door. There are no traffic jams. Plenty of parking both inside and outside. And most importantly many big helicopters have demonstrated, for years during Dasara Air Show that they can comfortably land in this area! Where else can you find a better place in the heart of the city? When something already exists, why create fresh problems.”

Our leaders and officials tend to lack a sense for responsible, sustainable and aesthetic tourism development.  And for some reason they can’t leave the Chamundi Hill and its surrounding areas alone.

From Minister late D.T. Jayakumar, who suddenly revived the idea of a Ropeway across the Hill to CM’s idea of developing Chamundi Hill on the lines of Tirupati-Tirumala Temple with Guest Houses; From the idea to put up a super-sized giant wheel with four-seater cabins called ‘Mysore Eye” on the Hill to installing fibreglass Canopy all along the steps… There are always plans to bring in commercial filth that overpowers divinity and stinks up serenity, all in the name of misguided tourism development.

Even the place where the new helipads are proposed, which was first marked for a Botanical Garden, the MUDA floated a ridiculous idea of turning it into a Theme Park with animatronics (robotic moving objects), IMAX theatre, battery-operated train and an artificial river. Then finally, they said it would be turned into a Rock Garden. That too was not done. Now a helipad!

While the Government doesn’t care for Chamundi Hill and the green area around it…what about Mysureans? Every Mysurean, who has found peace, love and truth in this oasis of green, has a duty to protect the Hill and the area around it.  Else, we will have to hang our heads in shame and despair when plastic bottles and empty chips packets, welcome us on the path where once carpets of glorious yellow jacaranda flowers invited us for an enticing nature walk.

P.S.: Ah! may be Sadhguru Jaggi Vasudev could perform “Inner Re-engineering” on our officials and leaders so he can save these trees and the Hill where he was enlightened.