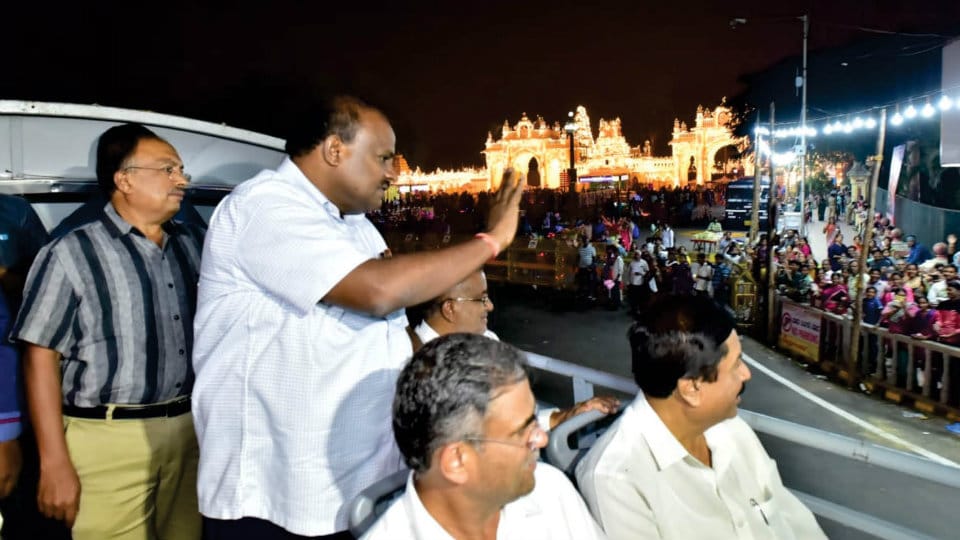 Mysuru:  As part of enhancing tourist experience this Dasara, the district administration is operating ‘Open-Top’ buses, similar to the ones that roam the streets of London in United Kingdom. This particular tour is attracting more and more people especially during the night to see the illuminated city.

So much is the response that the authorities are forced to extend the timings of the tour after dark. The concept of Open Top bus tour gives visitors to Mysuru an opportunity to go around the city during Dasara in a specially designed and branded bus.

Organised by the Karnataka State Tourism Development Corporation (KSTDC) in association with Bengaluru Metropolitan Transport Corporation (BMTC) and Department of Tourism, the vehicle takes visitors around important destinations during a 60-minute tour.

Tourists are taken around the city from 7 am to 10 pm. The authorities had earlier decided to run such buses from morning till 7 pm. But there was no response for the morning tours and people queued up for the night tour as it shows the illuminated city. Seeing the overwhelming response, the organisers decided to extend the night service till 10 pm.

A guide, dressed in traditional attire wearing a Mysuru turban is on board to explain to the tourists the significance of the historical places during the tour. A tariff of Rs. 150 per head has been fixed. Tourists are also offered light refreshments including juice, wafers and chocolates.

When the initiative was planned, it was decided to offer tourists the facility to book online tickets. As many local residents will be robbed of an opportunity to see the illuminated city if tickets are sold exclusively through online, it was later decided to close the online facility.

A separate counter has now been opened at the City Bus Stand enabling people to buy the tickets. People who want to take the bus tour can buy tickets between 11 am and 12 noon every day. 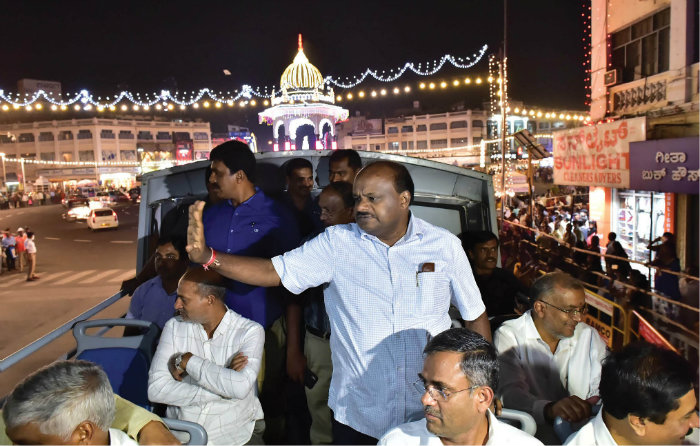 Last night, Chief Minister H.D. Kumaraswamy, who had come to the city to inaugurate the Yuva Dasara, took a ride on Open Top bus, instead of going around the city in his swanky and customised Range Rover SUV.

Accompanied by District Minister G.T. Devegowda, Tourism Minister S.R. Mahesh, Agriculture Minister Shivashankar Reddy and MLC Basavaraja Horatti and a host of officials, the CM responded to the waving and cheering crowd. The CM’s bus tour, however, had its own share of troubles as traffic jams were witnessed all along the route he took. The Police had to struggle to make way for an ambulance that was stuck in the jam.