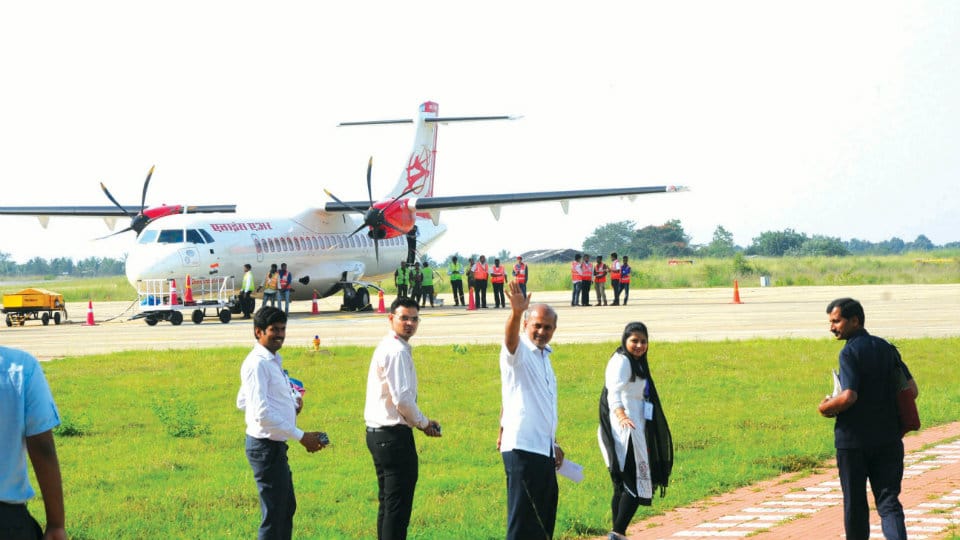 The flight service has been kick-started to facilitate travel of national and international tourists for the Dasara festivities. The Karnataka State Tourism Development Corporation (KSTDC) and the State Tourism Department are collaborating with Air India for this initiative. The flight tickets will be available at  reasonably subsidised fares.

As per Tourism Department, the lowest fare is Rs. 999 (plus taxes). Depending on  demand, flight tickets are also available at different price slabs, ranging from Rs.1,200 to Rs. 2,100. But, the Tourism Minister, Mahesh has clarified that people will only have to pay Rs. 999 plus taxes and the Tourism Department will pay the difference amount to  Alliance Air.

The flight service has got an overwhelming response with over 650 tickets already being booked for the 10-day service that will conclude on Oct. 20. With eight days left for Navaratri festivities to end, the number of bookings are expected to increase further.

Tourism Department Deputy Director, H.P. Janardhan said that the response has been good from day one. Passengers can  book tickets online and offline, Those looking for connecting flights can utilise the service on Bengaluru-Mysuru-Bengaluru route.

Taking the flight, Minister Mahesh said that the flight service was a special initiative by the State government and with this service, tourists can avoid the cumbersome road travel between Bengaluru and Mysuru.

The Minister expressed his disappointment over increasing interference of religious leaders in politics. When media persons sought his reaction over the recent prediction made by Kodi Mutt Seer, Sri Shivananda Shivayogi Rajendra Swamiji  regarding the bleak chances of survival of the coalition government, Mahesh said most of the seers in the past had come out with their own predictions and none of them have become a reality.

“I have the highest regards for the seer and if the seer continues to issue such statements, we will be forced not to believe them,” he  further added.