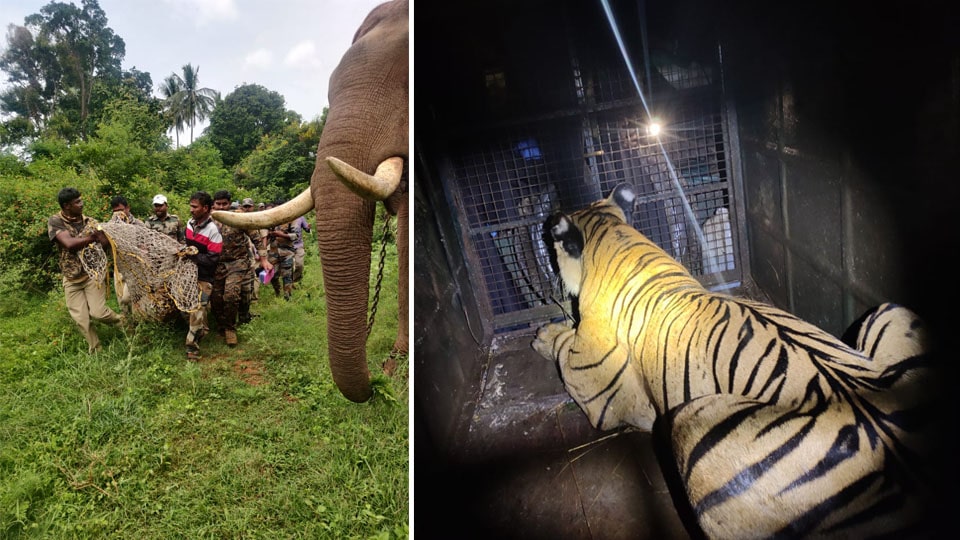 Gundlupet: Residents of villages bordering Bandipur Tiger Reserve and certain areas of coffee plantations in South Kodagu have heaved a sigh of relief today as two tigers that had created havoc by raiding human territories and killing cattle heads were captured yesterday by the Forest Department in separate operations.

While the elusive four-year-old tiger near Bandipur was captured near Kundakere with the help of tamed elephants, another tiger was captured at Srimangala in South Kodagu.

The tiger captured near Bandipur used to kill cattle heads at Kadabur, Chirakanahalli, Kundakere and Omkar Colony bordering Bandipur Tiger Reserve. The feline had killed more than 17 cows and numerous sheep since a month and had given sleepless nights to villagers who were afraid to step out of their houses even during day time.

On Monday afternoon, five tamed elephants including Dasara elephant Abhimanyu and Krishna from Mathigodu Elephant Camp and Jayaprakash, Parthasarathi and Ganesh from Ramapura Elephant Camp began their operation to trace the elusive tiger and traced it in a bush where it had killed a sheep earlier.

Soon, Veterinarian Dr. Nagaraju tranquilised the tiger which rendered it unconscious. The Forest staff then wrapped the tiger in a net and took it away. Bandipur Project Tiger Director T. Balachandra said that the tiger had wounds on its leg and was unable to hunt and as such was looking for an easy prey. It would be let free into the forest after providing treatment, he said.

Assistant Conservators of Forests (ACFs) M.S. Ravikumar and K. Paramesh and other Forest personnel took part in the operation.

In another tiger operation at Srimangala in South Kodagu, Forest Department personnel have been successful in capturing a tiger that was terrorising some of the villages in South Kodagu.

Earlier this month, the tiger was spotted inside a coffee estate near Balele and was also sighted near a coffee estate at Rajapura village. Fear had gripped residents of villages situated on the periphery of the Nagarahole National Park after many cattle heads were killed by tigers in Virajpet Taluk.

Since the last three to four months, more than 75 cattle were killed and residents had recovered half-eaten carcasses in their fields and coffee estates or near cattle sheds. Following many complaints, the Forest Department finally acted. The tiger was captured at 2 am today and Dr. Sanath Krishna Muliya headed the task.

A few days back, the tiger had attacked a Jersey cow belonging to Kallengada Dinesh Devaiah and the feline was spotted by Dinesh crouching 5 feet away from the cow’s carcass. Dinesh had fled the spot fearing for his life. After many representations to Forest Department and protests by villagers, the green signal was given to capture it.

However, villagers of South Kodagu said that there are two or three tigers on the prowl in South Kodagu and the Forest Department was doing nothing except clicking photos of cattle carcasses half-eaten by the tigers. These villages are not close by for a single tiger to roam around in all areas. They are at least 8 to 9 kilometres away, they argue, justifying the presence of more than one big cat.