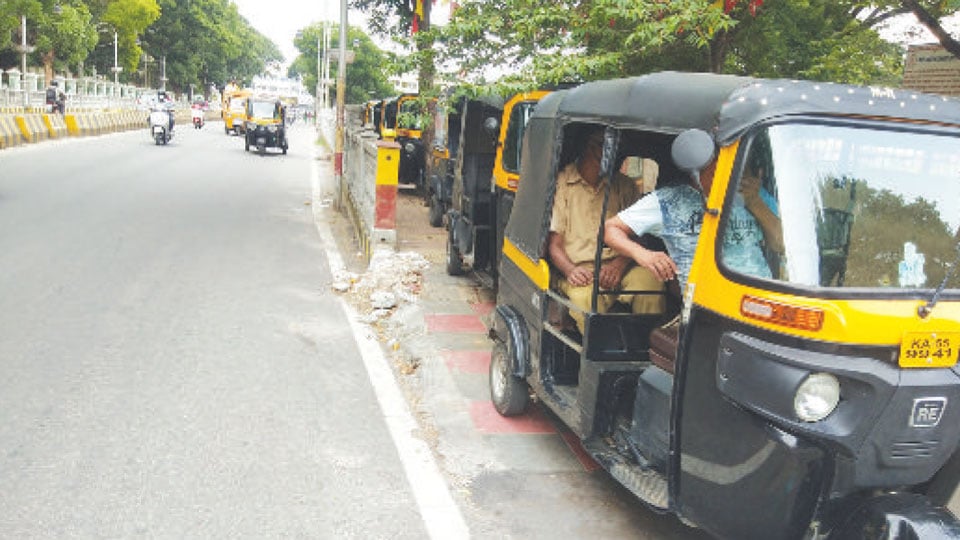 Mysore/Mysuru: On the first day after the  Government permitted resumption of public transport in the State with a set of conditions, Autos, Taxis and Maxicabs saw poor response from the public in the city on Tuesday, with hardly a few passengers hiring them.

Before the lockdown, Auto and Taxi drivers used to earn Rs.400 per day on an average every day, which was just sufficient for them for their livelihood. But the COVID-19 induced lockdown had forced them to stay indoors and with loss of income, they were a worried lot. Now, nearly two months after the lockdown, the Government on Monday announced resumption of passenger transport with a set of conditions, which was welcomed by auto and cab drivers and all other stakeholders. But their delight seems to have shortlived, as they received poor response from the public on Tuesday, the first day. As such, the auto drivers are clueless on whether they will regain their earnings like in the pre-lockdown days.

Manukumar, an Uber auto driver, told ’Star of Mysore’ that he went to the sub-urban bus stand as early at 5 am yesterday expecting a good response from the public. But, his hopes were dashed as he could get only a lone passenger all through the day and could save only Rs.50 for his family after spending Rs.40 on food. Expressing concern on his livelihood if the same trend of lukewarm public response continues for a couple of months, Manukumar said that he is only hoping that the situation improves.

Sagar, a OLA Auto driver said that he faced difficulties in running his family with loss of income for the past two months. But the passengers seem to be reluctant to board autos and cabs, which is a cause of worry for them. ”On the entire day yesterday, I got a single passenger, who paid a hire of Rs.50. This situation is deeply worrying and auto drivers have to face more trouble if passengers continue to show reluctance to board Autos”, he said.

Zakir Hussain, a Taxi driver, said that the authorities have given permission to Taxis for operating only within the district, which is not helpful for taxi drivers. Most people hire taxis for faraway destinations and as such, the Government should remove inter-district travel restrictions and allow Taxis to operate throughout the State.

Another Taxi driver Syed Asif said that although he waited throughout the day, he failed to get even a single trip on hire. Wondering what the future of taxi drivers would be, he said he was all the more worried as he has to pay vehicle Insurance and Road Tax in about two months.

Noting that travel pass is necessary to even go to close by destinations such as Srirangapatna, which is in neighbouring Mandya district, he said that the Government should issue passes that is valid for travel throughout the State.