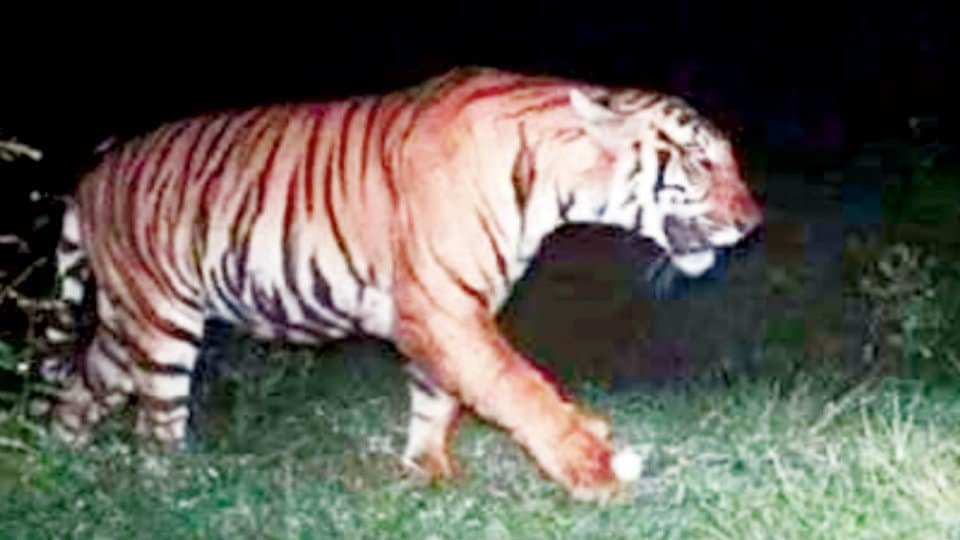 Gundlupet: Forest officials, who were hoping to tranquillise and capture the tigress that had reportedly killed two villagers on the fringes of Bandipur Tiger Reserve, have not been able to do so till now as the tiger has remained elusive and quick in its move from one place to another.

Though the big cat has been spotted in one of the camera traps set up by the Forest Department, the tiger has been giving the officials the slip.

Today the operation to trap the tigress entered the fifth day and one more elephant Ganesha has joined the six-member elephant team led by Abhimanyu.

Also, Chamarajanagar Deputy Commissioner B.B. Cauvery has imposed Section 144 in certain villages like Chowdahalli, Hundipura, Moorkalgudda and a few other villages to prevent curious people crowding to catch a glimpse of tiger operation. This action is to prevent the feline from running away to secluded places following human presence.

The tigress unleashed terror again yesterday by preying on a newborn elephant calf in the Gopalaswamy Betta range of Bandipur Tiger Reserve. The half-eaten elephant calf was sighted near Maguvinahalli village. A camera trap image of the tiger was also seen at 4.42 am.  The search teams are combing the area to capture the feline, said to be hiding in the dense forest after claiming her second victim last week.

“We found the blood-stained parts of the carcass of the calf and a trail of blood inside the forest. We are verifying whether the same tigress killed the calf. Despite stiff resistance from the elephant herd, the cat dragged the calf away and feasted on it,” a Forest Officer said.

The search team has also roped in Soliga tribals, who are adept at hunting on foot, from the Biligiri Ranganathaswamy Temple Wildlife Sanctuary. “Soligas are good at searching the big cat. They are good at following the trail left by leopards and tigers,” T. Balachandra, Director, Bandipur Project Tiger, said.

Soliga tribals are known for their ability to search for wild animals on foot. Some of them also work with the Department as patrollers and watchers. The tribals, who stay in and around the Reserve, are well-versed in age-old hunting techniques, which the Department now plans to make use of.

As of now, five Soligas have been assigned to track the tiger. They move on foot, and are experts in tracking elephants and tigers. Yesterday, a sniffer dog was used to sniff out carcasses of dead animals to track the tiger. Under pressure from villagers to tranquillise the tigress, the Forest Department used the sniffer dog for the first time for a tiger operation. The dog is normally used to detect wildlife crime cases and track poachers.