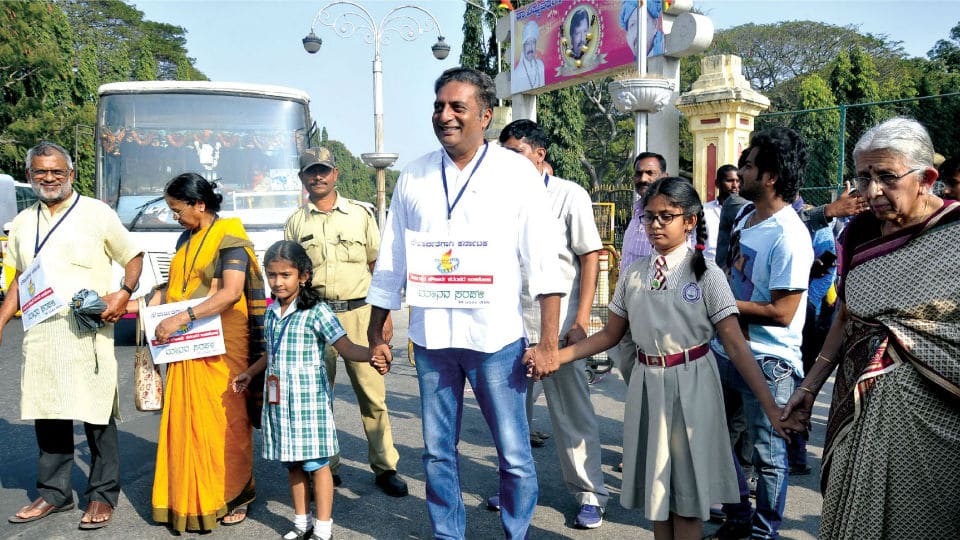 I oppose only a few individuals: Actor Prakash Rai

Mysuru: Multi-lingual actor Prakash Rai has said that he opposes only a few individuals and has not spoken about any political party or religion or caste.

Speaking to press persons after participating in a human chain formation organised by Souhardhategagi Karnataka Organisation near Kote Anjaneyaswamy Temple at the North Gate of the Palace here yesterday, he said that he is Anti-Modi, Anti-Amit Shah, Anti-Anant Kumar Hegde and Anti-Yogi Adityanath.

Stating that he has the courage to name them and also it was his right, Prakash Rai maintained that he would not love people who create tension and violence in the State.

Pointing out that development is important for him and not violence, the actor said: ‘First I am a citizen, a human being. I have no caste or religion. Let them name me Communist, Congress, Christian or Dalit.’

Noting that Karnataka has a history of amity and harmony, Rai said people were fed up with the politics of communalism.

Stating that people were not fools and the real issues were employment and job creation, farmers struggles and a fair price for all agricultural produce, he alleged that there were forces trying to hoodwink the public and mislead them by creating communal tension in the society.

He further said that he will appeal to the people not to blindly cast their vote for aparticular caste or get swayed by money power.

The human chain is a warning bell to those who try to disturb peace in the society.

Hundreds of activists of the organisation and members of the public formed the human chain and held placards depreciating communalism and highlighting the imperatives of maintaining social harmony.

2 COMMENTS ON THIS POST To “I oppose only a few individuals: Actor Prakash Rai”