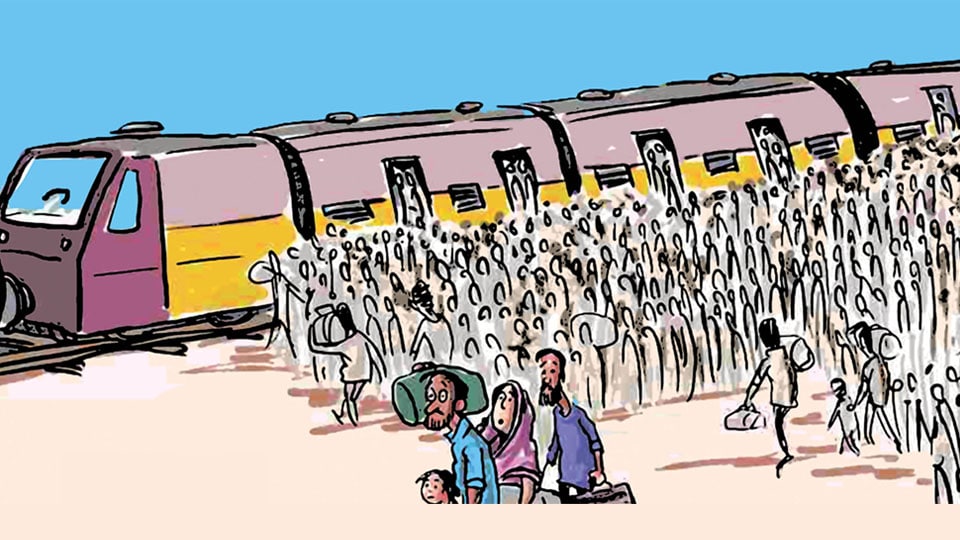 The recent incident of gang rape and armed robbery has triggered a new topic of conversation in Mysuru, a conversation that was for the most part limited to Bengaluru — the “outsider” problem.

We do have a record of heinous crimes being committed by locals, but for the most part, they are connected to their line of business — a real estate deal gone wrong, a drunken brawl, political rivalry, debt collection etc. It never really affected the common man. But now the random act of violence by criminals from outside States on innocent citizens has triggered a fear of the “outsider.”

Fearing outsiders or being wary of them is one of our oldest, built-in psychological tendencies. In pre-historic times, this distrust may have made us vigilant and kept our communities safe but in modern times this ingrained fear leads to bigotry and a disharmonious society.

As for Mysuru, whether we like it or not folks, the outsiders are coming and they will come steadily over the next decade.

As our airport functions regularly, the 10-lane highway opens and with more trains coming in, we are becoming a well-connected city, with that we become a ‘welcoming city’ — Welcoming industries and employees from all over the country.

According to the 2011 census, 48 percent of Mysuru’s population was migrant. Back then, our population was  9.2 lakh of which 4.5 lakh people claimed to be migrants. Of this, 90% were migrants from other parts of Karnataka and only 10% came from other States. Now it must be much more.

When there is development, immigration follows, this is the inevitable reality of modern cities. Cities grow, industries come and then the chain reaction begins — employees follow, construction activities start, labourers come, slums form, traffic increases, so also pollution, and then crime.

But before we feel good old Mysuru is doomed and feel gloom, there is hope, only  if the Government is prepared for this urban onslaught. On the bright side, it is an opportunity to make Mysuru a well-planned modern city.

The Government should have a Comprehensive Development Plan for Mysuru in the next year. Yes, there is one, but it needs much reworking. The Government can have an expert panel that can take some sound decisions to make our city livable and sustainable such as not blindly allowing any type of industry into the city. Choose ones that don’t pollute and hurt our image as a clean city or damage heritage structures.

Or make building laws that allow more floors so the city grows vertically which means less financial and structural burden to the City Corporation when it comes to providing electricity, water and drainage.  Of course, all this away from important heritage structures in the heart of the city like it’s done in Paris and other heritage-rich cities.

Also Mysuru City Corporation could be split up,  one for North Mysuru and another for South Mysuru.

Most important, prepare the Slum Board to be more effective. More construction activities means more labourers from all over the country, which means they’ll pitch a tent in public spaces meant for parks and other public services.

Finally, Mysuru will need a bigger Police force. A more responsible, stringent and accountable Police because there are going to be political conflicts.

As immigrants come they tend to congregate, live and thrive in one area. After a while, once they have the numbers, they won’t elect a local Kannadiga leader anymore, it could be a Tamil leader in a Tamil-dominated Ward or a Bihari leader in a Ward dominated with immigrants from that State. This will lead to unrest, unless you have a strong law and order protocol in place.

READ ALSO  Why Mallya & UK Court can mock us...

Immigrants can be seen in a negative light as ushering in over-population, pollution and dilution of local culture. Also temporary migrant workers  and non-local industries don’t have a sense of belonging to the city so they don’t care how they treat the city. And they usually treat it badly. But then, if it is handled well immigrants can enrich a city.  There will be new cuisines and a more culturally diverse city with new art forms and artists.

Of course, steadily but surely you will hear more Hindi and other languages rather than Kannada. And yes, it will make an “original” Mysurean feel like an outsider in his own city. But this is only natural. While it is up to the Government to manage infrastructure and law & order issues, it is up to the people to find a way to live in harmony and the first aspect of it is language.

The first point of friction between a local and an outsider in India is language. Since our States were created with language as their basis, each State is very proud and protective of its language, so also Karnataka.

So, non-Kannada speakers, looking to settle down in Karnataka, will make life easy for themselves. Knowledge of the local language will help one integrate into the community, else they will always remain “outsiders.”

Also learning the local language is a way of showing respect to the State, which endears one to the people of the State.

More importantly, the local language has an unmatched emotional and communicative value. That is why, Nelson Mandela said, “If you talk to a man in a language he understands, it goes to his head. But if you talk to him in his language, it goes to his heart.” So let us hope Mysuru gets immigrants who can integrate into the hearts of Mysureans.e-mail: [email protected]