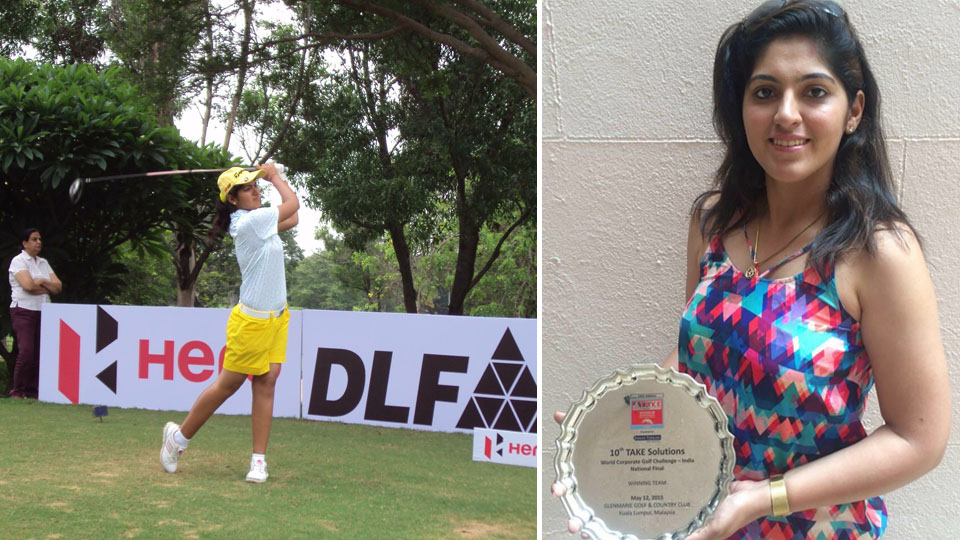 I owe my success to JWGC: Sonam Chugh

The mothers dragging their little children from one hobby class to another are often scoffed at for being too pushy. Free play is important for holistic development of a child. Isn’t it? Why thrust your own ambitions on your kids? Let them decide their own course of life — is the modern thinking.

Think again. Could the Phogat sisters find their glory if their father would’ve let them be, watching meekly from a distance, patiently waiting for his daughters to find their own calling? Definitely not. Geeta and Babita, who had the fortune of having a biopic made on them, would’ve got married at the ‘right’ age and fallen into oblivion.

Why go far off? In our own backyard, we have a home-grown golfer who at the tender age of seven, was ordered to play golf by her father. With a wooden ruler in his hand, the ‘monster’ father would watch his little girl hit the golf ball on the terrace of their house. Though the ruler was only to scare her, the sight of it was enough to make her go on hitting the ball for an hour every day.

She would cry begging him to let her go but he wouldn’t budge. Fast forward to about two decades later, today that pretty little girl is a well-known name on the golf scene not only in Karnataka but also in India. She is a professional player, an international referee and a certified coach.

For the uninitiated we are talking about our very own Sonam Chug (daughter of Nina Prakash and V. Prakash) who has been playing golf for more than two decades and tournament after tournament adding new feathers to her already decorated cap.

“I am grateful to my parents for forcing me to play golf. Today I can’t imagine my life without golf. It’s my identity. My passion,” says Sonam emotionally, her voice brimming with pride. Sonam is the youngest woman to be qualified as a Certified International Rules Official. After finishing among the top two referees in the Level 2 referee exam held last year, she was sent by the IGU (Indian Golf Union) to St. Andrews in Scotland to complete her certification.

“There was no pressure to bring trophies home, I was just asked to play the game. Initially it was a torture but when I started winning tournaments, I started enjoying the game,” reveals the golfer who played her first tournament at the age of 12. Since then there has been no looking back. About two hundred trophies won by the exuberant woman glitter the foyer of their home in Gokulam and gladly there is a room for plenty more.

After playing amateur and corporate golf for about two decades, when in 2015, Sonam won World Corporate Golf challenge in Portugal, Toyota Karnataka Golf Festival and the Prestige Masters, she knew it was the time to go professional. Sonam is the first woman to represent India and the first and only woman in the world to win the World Corporate Golf Championship.

“Very shortly I will be a certified coach. After that I can play, be a referee and also coach,’ announces Sonam beaming a modest smile. In India there are only five international certified women referees and approximately the equal number of women coaches.

Play, referee and coach — which is your favourite? I ask. In response, she lets out a confident laugh before speaking. “I love all three. Playing is something which gives me ultimate joy and I would never stop playing. Coaching is equally exciting. It is like passing on your passion to a budding player. And being a referee comes naturally to me. It is thrilling because one wrong nod from the referee can change the complete game. It’s challenging to be in that responsible position.”

A product of Jayachamaraja Wadiyar Golf Club (JWGC), Sonam owes her success to her home Club which has always been encouraging towards the young talent.

At 15, her parents gave her a choice to take up golf professionally or go the regular route of education along with amateur golf. ‘Continuing with higher education was my clear choice. Golf is fun to play but there is no money in it especially in India. Moreover, I wanted to have something to fall back upon,’ she explains truthfully.

When the free-wheeling conversation at her house shifts to benefits of golfing, she gets up to go to her room and comes back with a book. The book titled ‘Golf and Networking — a Myth or Reality’ is authored by Sonam. “There are no myths, it is only reality. Golf definitely helps in networking,” Sonam clarifies.

“There are separate women and men tournaments but mainly there are no age wise segregations. You would be playing with a teenager one day and playing with an octogenarian the next day. Besides the joy that playing the sport gives, networking and the learning that comes from meeting people from various walks of life is an impetus to take up golf,” she says.

What it takes to excel in golf? I am eager to know.

“Physical fitness and mental agility but unlike other sports, more than physical stamina, one needs mental strength. Golf is a mind game. Earlier, golf was considered an old man’s game but now as more and more youngsters are playing the sport, the dynamics are changing.”

What next, I am curious to know.

“I live each day as it comes. In future, it is difficult to tell towards which of my three passions I would lean more — play, referee or coach. I will decide as the opportunities come. As of now I am getting into my father’s business as well as playing the game for the love of it,” declares the chirpy woman with aplomb.