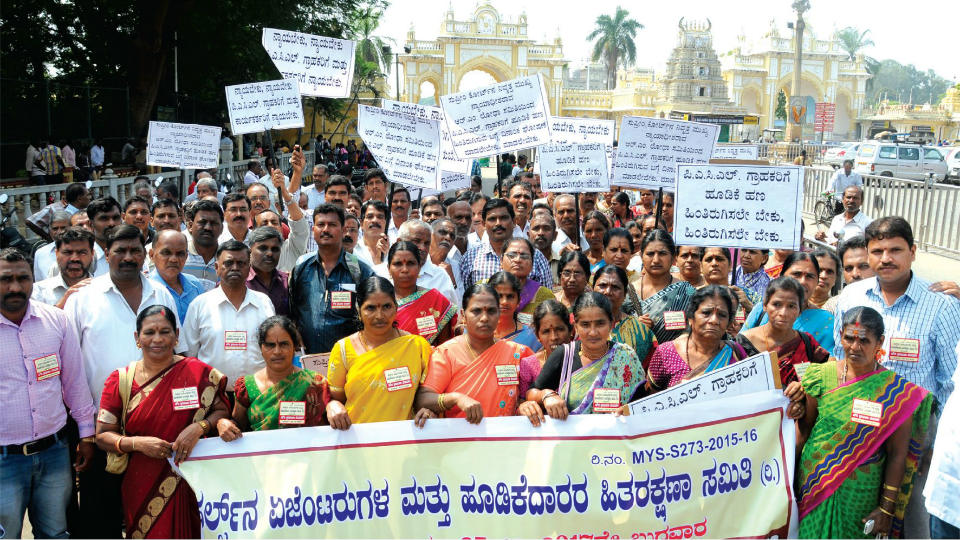 Mysuru: Hundreds of PACL (Pearls Agrotech Corporation Limited) agents from Mysuru, Chamarajanagar, Mandya and Hassan districts took out a silent march in city this morning urging for immediate return of money to investors.

The march, which began from  Kote Anjaneyaswamy Temple at the North Gate of the Palace, passed through the Clock Tower, Gandhi Square, Dufferin Clock Tower, D. Devaraj Urs Road, JLB Road and Hunsur Road before reaching the Deputy Commissioner’s (DC) Office, where a memorandum was submitted.

The agents demanded the implementation of the recommendations of the Supreme Court-appointed retired CJI R.M. Lodha’s Committee and ensure justice to six crore investors across the country.

Maintaining that most of the investors were from middle class and poor sections of the society, they claimed that over 50 agents have ended their lives, unable to bear the harassment by investors. They urged the Government to take the issue seriously and come to the rescue of agents and investors.

In another demonstration, over 200 residents of Ekalavyanagar Colony, under the banner of Socialist Unity Centre of India (SUCI) staged a protest in front of DC Office here demanding fulfilment of their five-point charter of demands.

Claiming that most of the colony residents were nomadic and semi-nomadic tribes and were living in the colony for over 15 years, the protesters demanded individual houses to all slum dwellers, formation of a layout on the lines of Budaranagar in Ballari and proper sanitation in the colony. SUCI office-bearers D. Ravi, Chandrashekar, M. Umadevi and Sandhya, activists Gavirangappa, Vasu and others took part in the protest. Earlier, the protesters marched from Kote Anjaneyaswamy Temple to the DC Office, where they staged a protest.

In yet another demonstration, members of the Mysuru District Unit of State Government Employees Association presented a memorandum to the DC seeking fulfilment of their demands which included implementation of the recommendations of the Sixth Pay Commission and continuation of old pension rule among others.