Home » Voice of The Reader » ‘Padlocks of Love’ on ‘Trees of Love’: A Moscow Custom or Superstition? 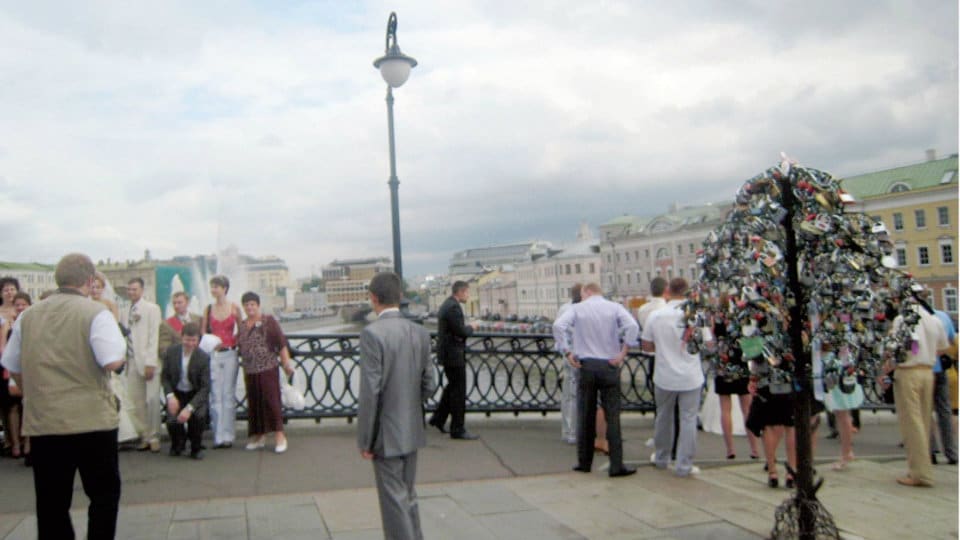 ‘Padlocks of Love’ on ‘Trees of Love’: A Moscow Custom or Superstition?

I have been enjoying reading the latest Abracadabra pieces — the ones that have been appearing under the title “Gone Away: To Germany & Austria.” The picture of locks that appeared in the third part of Abracadabra “A Day Out Looking at Down Town Berlin,” and the reference to it as a “manifestation of superstition” remind me of  “a weird Moscow custom” I had the pleasure of witnessing when I visited that city a few years ago.

It has become customary among many newly-weds in Moscow to seal their bond in a “weird” way: They rush to the Luzhkov Bridge, not far from the Kremlin, soon after the wedding ceremony; hang a padlock, symbolising their wedlock, on one of the metal trees placed on the bridge; and then throw the key to the lock into the canal below the bridge.

Throwing the key into the canal is meant to make the bond between the newly-wed couple permanent. If either of the couple wishes to break the bond, he or she will have to dive into the canal, retrieve the key and open the padlock. Retrieving a key from the thousands that are lying at the bottom of the canal is an impossible task.

A scene on the Luzhkov Bridge in Moscow, when this author visited the place. Newly-weds are seen posing to be photographed, after they symbolically proclaimed the permanence of their union by placing padlocks on the metal tree on the bridge and then throwing the keys to the locks into the canal below.

The practice, it is said, had its origin in an ancient Russian custom. According to Russian lore (Russians are fond of folklore), young married couples used to be locked inside a granary shed on their wedding night. The purpose behind it was to provide them some privacy, away from the wedding-day crowd.

A few years ago, some romantic Muscovites decided to adapt this ancient custom. The newly-weds’ hanging “Padlocks of Love” — as they are called —on “Trees of Love” placed on the Luzhkov Bridge is the outcome of that adaptation.

The practice caught on so fast that, in a couple of years, this footbridge got crowded with metal trees. Additional ones had to be placed on the street next to the bridge and, then, on other streets. Today, according to a travel brochure, there are 10 streets in Moscow where newly-bonded couples can go and demonstrate their inseparability by placing padlocks on metal trees.