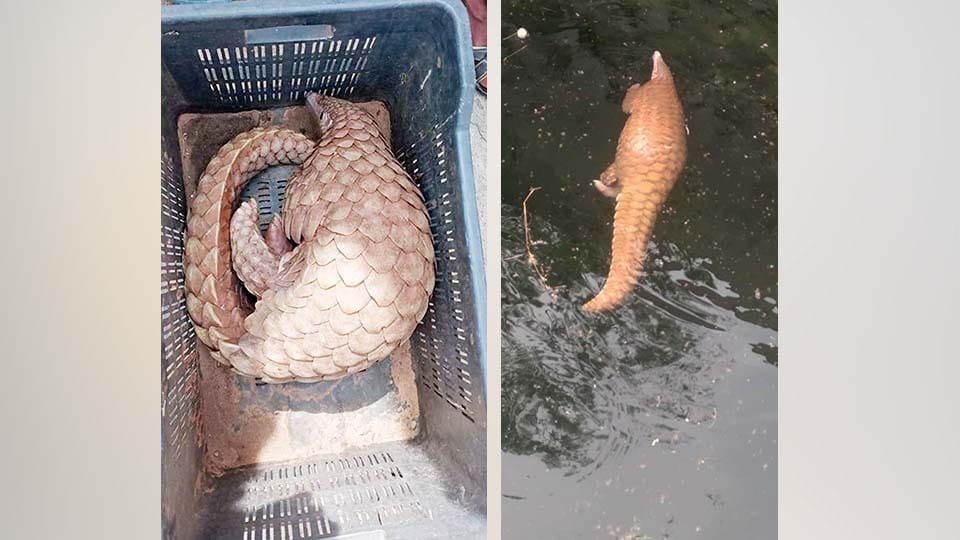 Mysuru:  A pangolin, which had fallen into a well at Chikkadanahalli village, Bilikere hobli in Hunsur taluk, has been rescued by the villagers and handed over to the Forest Department.

The pangolin, which had come in search of food and water, had fallen into the 15-20 ft. deep well yesterday. A few youths who saw the pangolin floating in the well, rescued it after a hour-long operation and informed the Forest Department officials, who reached the spot and took custody of the pangolin. The pangolin was released into Melukote forest area in the evening.

Pangolins, or scaly anteaters as they are otherwise known, are unique mammals covered in hard scales, comprised of keratin. They prey almost exclusively on ants and termites and are predominantly nocturnal and elusive, secretive mammals. The shy, harmless pangolin is becoming increasingly well known for one reason: It is believed to be the world’s most trafficked mammal. Tens of thousands of pangolins are poached every year, killed for their scales for use in traditional medicine and for their meat, a delicacy among some ultra-wealthy.

They are listed under Schedule I of the Wildlife (Protection) Act of 1972. IUCN lists the Indian Pangolin as ‘Near Threatened’ and the Chinese Pangolin as ‘Endangered’.

‘India that is Bharat.’ Are we sure?
B. Sharat’s transfer: CAT directs Government to review order