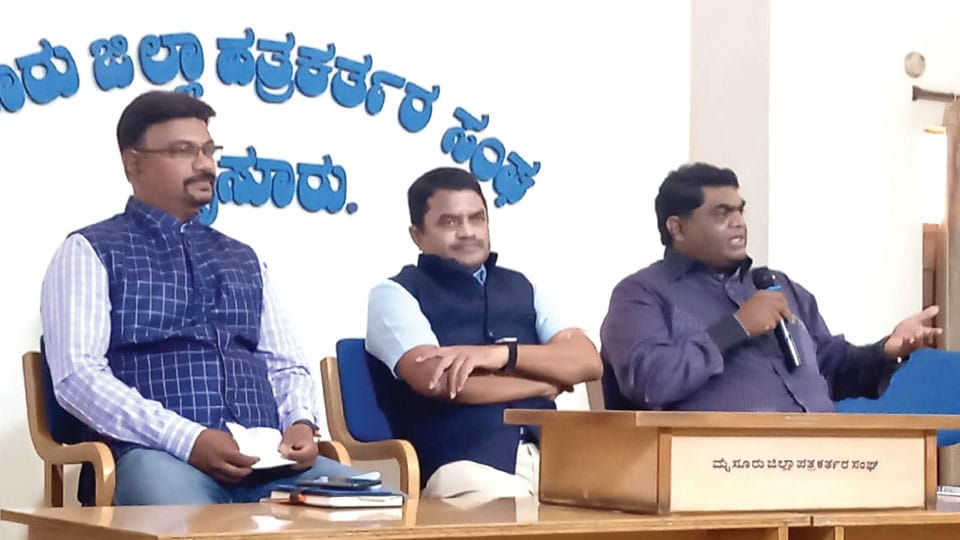 Mysore/Mysuru: There is an urgent need to implement the upgraded plan to supply uninterrupted water to South-Western parts of Mysuru city by drawing more water from River Kabini.

The project is estimated to be over Rs. 90 crore and the Mysuru Urban Development Authority (MUDA) has started works on the project with the construction of water pumping, treatment and supply plants.

At a press conference held at Pathrakartara Bhavan in city on Sunday, National Real Estate Development Council (NAREDCO) Mysuru Unit Chairman N. Divyesh pressed for the speedy and urgent implementation of the project that is aimed at supplying uninterrupted water to both MUDA-formed layouts and MUDA-approved private layouts.

The project can supply water to all the parched areas of South-West Mysuru and it will help the people of R.T. Nagar, J.P. Nagar and hundreds of residents of private and MUDA layouts all along the Ring Road, he said.

“The precise reason why there is no development in the region is the lack of water. Only the rich and the affluent can afford to sink borewells and they are constructing houses while a large part of R.T. Nagar — where over 8,000 sites have been distributed — has remained unoccupied. Also, the huge water tanks built by MUDA to store water are of no use now,” he lamented.

“People here depend on water tankers and borewells. Take J.P. Nagar for example. A water connection was provided in 2012 as per the requirement of the population then. Now the area has grown in leaps and bounds but there is no water and people excessively depend on borewells and private tankers,” Divyesh noted.

READ ALSO  Back in a day ! MUDA Commissioner transferred on Saturday, back on Sunday

The Bidaragodu Jackwell point has the capacity to pump 180 MLD (Million Litres per Day) but only 60 MLD is being supplied to Kuvempunagar, J.P. Nagar, Bankers Layout, Jayanagar and surrounding areas. MUDA has to make full utilisation of the remaining 120 MLD to provide water to MUDA and private layouts at R.T. Nagar, Vijayanagar Fourth Stage, J.P. Nagar, University Layout and surrounding areas. “This will benefit over one lakh houses,” he said.

NAREDCO Mysuru President T.G. Adisheshan Gowda advocated faster land acquisition to expand the runway of Mysore Airport at Mandakalli for which the Centre has allocated Rs. 700 crore. At present, the Airport has a single runway of 1,740 metres in length which is only suitable for ATR planes providing short-haul flight operations.

The existing Airport is spread over 507 acres and under the expansion project, the length of the runway has to be increased to 2,750 metres and 45 metres width that allows jet aircraft such as Boeing 737 and Airbus A320 to land.

An additional 240 acres of land is required for the purpose and the land acquiring process must be speeded up by paying compensation to the landholders, he said and noted that the State Government has to release Rs. 400 crore for the land acquisition.

He said that NAREDCO will host a seminar at the Mysore Airport premises soon to draw attention of the Government on the uses of expanded runway including increased revenue, boosting growth in the region and also manifold increase in employment opportunities. Heads of Government, MP Pratap Simha and MLAs would be invited for the seminar. NAREDCO State President M. Satish Kumar was present at the press conference.