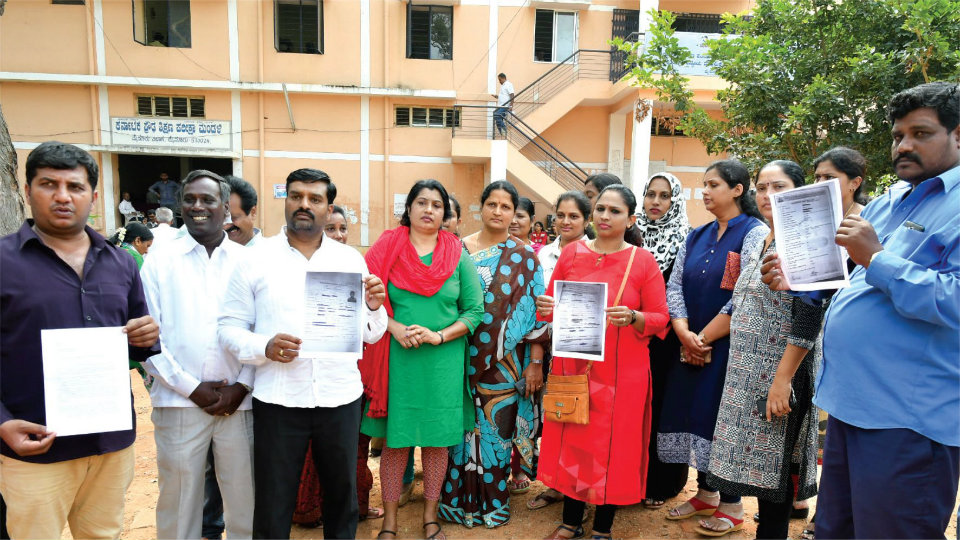 Mysuru: Parents of more than 50 children are up in arms against a private school in city as they have claimed that the school, where their children are studying, is not affiliated to Central Board of Secondary Education (CBSE). The school, Royale Concorde International School at Bogadi Second Stage here, has got permission only to offer State syllabus in Kannada medium, that too till class 5 only, parents said.

The parents have now lodged a complaint with Manjula, Deputy Director of Public Instruction (DDPI), a copy of which is available with Star of Mysore. Meeting the DDPI yesterday, the parents have alleged that all these years, the school has conducted annual exams in the name of “Balodyana”, a different school that has CBSE affiliation. Even the certificates have been issued from Balodyana English School, though the children are studying and paying fees to Royale Concorde International School.

Parents told the DDPI that at the time of admission, the school authorities had claimed that the institution was offering education under CBSE syllabus. “The school started functioning in Mysuru from academic year 2013-14 and from day 1, the school Management has never lived up to their promises. During admissions, there was no proper infrastructure and they promised us that construction of the building will be completed within a year but it took four years for them to do so,” the complaint stated.

As the school does not have CBSE affiliation for 9th and 10th Standards, it has issued Transfer Certificates (TC) to our children from their school on 4/4/2017 and admitted our children in another unknown school named ‘Balodyana’ run by Balodyana Trust. The school authorities morphed our children’s photographs and with the help of photo-editing software, they have used our child’s face but with Balodyana uniform and have registered our children to CBSE Board as Balodyana students, the complaint stated.

Parents have said that the school indulged in such activities without their knowledge and they were made to sign a couple of documents. “When we questioned why we were being made to sign documents, school authorities told us that those were papers for CBSE Board registration. In reality, they were our consent letters for Transfer Certificates from Royale Concorde School to Balodyana School,” a parent said.

The complaint stated that when the parents confronted  School Principal Prabhavathi on Nov. 13 about the Transfer Certificates and Balodyana.

She told the parents that nothing was in her hands and she was just following the directions of school Chairman and former MLA L.R. Shivarame Gowda.

The parents told the DDPI that they want their children to be identified as Royale Concorde students and not of ‘Balodyana.’ They demanded justice by making arrangements to write CBSE Board exams (for class IX and X) as students of Royale Concorde.

Responding to the complaint of parents against Royale Concorde International School, DDPI Manjula has stated that she would forward the complaint to the Commissioner of Public Instruction for further action. “We have sent South Zone Block Education Officer Prakash to the school and action will be taken based on the report he files,” she said.

Advising parents and guardians of children, Manjula has asked them to verify the credentials of the school before admitting their children. “If you want to admit your children to any CBSE, ICSE schools, make sure that the school has valid registration certificates,” she said.