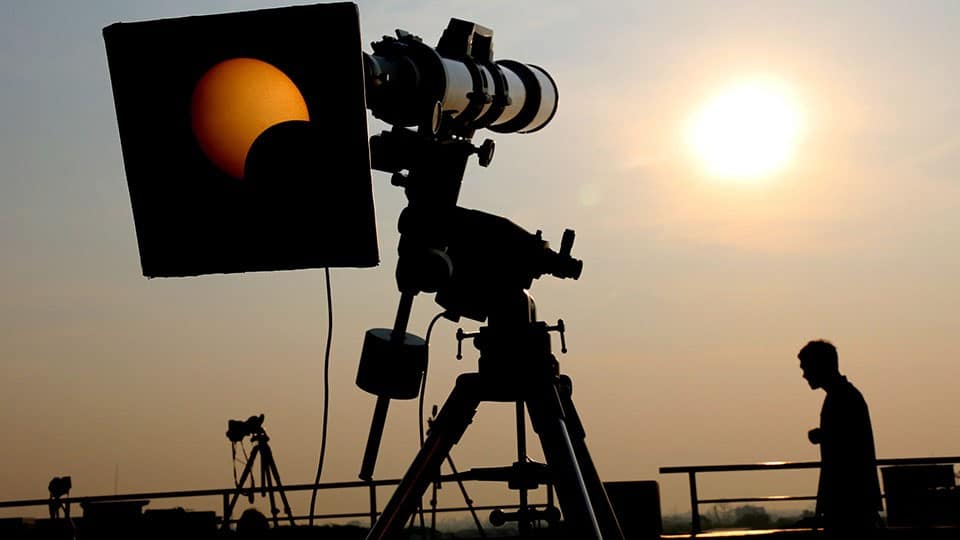 ‘Sky Watching’ is one of the most fascinating, appreciating and thrilling experience. Winter sky is the best time to watch the night sky, as it is very conducive for observing night sky. One of the most captivating astronomical occurrences in Astronomy is the observation of an ‘eclipse.’

Eclipse is the most pleasurable, extravagant and conspicuous astronomical spectacle in the sky. Throughout the past, human beings must have stopped in their diurnal struggle to survive in order to stare in disbelief at the gradual disappearance and re-emergence of Sun. Through most of the recorded history, eclipses have been viewed as a supernatural manifestation, usually a premonition of some impending calamity or misfortune.

Indians are really fortunate to witness the most astounding, anticipated and striking ‘Annular/ Partial Solar Eclipse’ on June 21, since it is visible from all prominent parts of India. The rare phenomenon of the annular/ partial solar eclipse, or the ‘ring of fire’ on June 21, 2020 would be clearly noticeable in all parts of India and the astronomy enthusiasts are all geared up to witness the marvel that happens seldom. Though the solar eclipse happens in regular intervals, the annular/ partial solar eclipse is a sporadic phenomenon, and it occurs when the Moon’s apparent diameter is smaller than the Sun’s, thus obscuring most of the Sun’s light and make it appear like an annulus (ring).

On June 21, ‘Annular Solar Eclipse’ will be observable in the region covering Central African Republic, Congo, Ethiopia, Northern India, China and Sothern Pakistan. Apart from these places, partial solar eclipse will be discernable from a larger region of the world which covers most of Asia, Sothern India, Northeast Africa, Oceana and Western Australia. Few northern parts of India namely Chamoli, Kurukshetra, Sirsa, Dehra Dun, Haryana, Delhi and two other places will be really fortunate to see to annular solar eclipse, wherein percentage of obscuration will be about 93% to 99%.

From Mysuru, the type of eclipse is preferably partial, as we cannot completely notice obscurity.  The annular phase of this solar eclipse is not visible from Mysuru, but it can be observed there as a partial solar eclipse. The Moon covers a large portion of the Sun, so this is a spectacular sight. The percentage of obscurity of moon at Mysuru is about 35%. A Pinhole Camera is the simplest way to view an eclipse, but the solar image will be inverted.

The complete details of Partial Eclipse of Sun at Mysuru are given below in Indian Standard Time (IST):

Maximum or Greatest Phase of the Eclipse: 11.43 am

Percentage Obscuration of Sun by Moon: About 35%

The solar eclipse from Mysuru will commence at 10.10 am and terminate by 1.26 pm. The greatest or maximum phase of the eclipse will eventuate at 11.43 am. The magnitude of the Annular eclipse of the Sun is 0.345. Remember that, Mysureans can witness about 34.5% of the eclipse and generally regarded as a partial solar eclipse rather than annular solar eclipse. The total duration of the Partial eclipse is 3 hours 16 minutes. The path width of the solar eclipse’s shadow is 110 kilometers and will travel at a speed of 1.1 kilometers per second. During its over three hour trajectory, the annular eclipse is going to cover approximately 12,900 kilometers which is 0.34 per cent of the surface area of planet Earth.

An annular eclipse occurs when the Sun and Moon are exactly in line with the Earth, but the apparent size of the Moon is smaller than that of the Sun. Hence the Sun appears as a very bright ring, or annulus, surrounding the dark disk of the Moon. Annular solar eclipse is completely different from total solar eclipse. The sun will never be completely obscured by Moon so darkness or tenebrosity never descends on the surroundings. The name “annular” had its origin from a Latin word “annulus” meaning “ring”. If the characteristic ring of fire is discernable from even from a location, the whole eclipse is regarded as an annular solar eclipse.  Also, they can only be observed with the use of solar filters and only with the naked eye if they are very close to the horizon, and even then, great care must be taken.

Eclipse photography is fascinating, but there is one point to be borne in mind. For telescopic use, filters made of chromium deposited on glass pass the requisite amount of photospheric light to photograph and view the partial phases while also giving images of excellent definition. A very slight increase in transmission at the red end of the spectrum often gives a pleasant tint to the solar image. Welders’ glass of #14 or #15 grades is also safe for visual or photographic viewing, although the colour is usually less pleasing. Filters that go on the eyepiece end are always liable to crack or be otherwise damaged under the concentrated solar radiation, so are much less safe than filters placed above the objective lens. But to observe a total or partial lunar eclipse, there is absolutely no harm in watching with unaided eye. There is absolutely no necessity of a telescope or binocular to observe total or partial lunar eclipses.

The brightness of the solar corona during annularity or totality is approximately that of the full moon, and the corona during totality is equally safe to watch. However, starting at the crescent or other partial phases of the eclipse can be hazardous to eyesight, so caution should be given about how to watch an eclipse safely. In general, the partial phases are hazardous, but totality is both glorious and safe. In fact, we will not experience the full glory of totality unless we view it directly. To observe partial or total solar eclipse, it is safe to make use of solar filters. The key factor in safe solar filters, aside from their absorbing or reflecting sufficient levels of solar intensity, is that they do so evenly across the spectrum; that is, that they are of Neutral Density (ND). Solar Filters are made of aluminized Mylar, a coated plastic, are very popular and inexpensive. As long as these Mylar filters are undamaged, without creases or pinholes, they are safe to look through.

Observing directly at the photosphere of the Sun (the bright disk of the Sun itself), even for just a few seconds, can cause permanent damage to the retina of the eye, because of the highly intense visible and indistinguishable radiation that the photosphere emits. This damage can result in the impairment of vision, up to and including blindness. The retina has no sensitivity to pain, and the effects of retinal damage may not appear for hours, so there is no warning that injury is occurring. Viewing the Sun during partial and annular eclipses require special eye protection or indirect viewing methods if eye damage is to be avoided. The Sun’s disk can be viewed using appropriate filtration to block the detrimental part of the Sun’s radiation.

Sunglasses do not make viewing the Sun safe. Only properly designed and certified solar filters should be used for direct viewing of the Sun’s disk. Especially, self-made filters using common objects such as a floppy disk removed from its case, a Compact Disc, a black colour slide film, smoked glass, etc. must be avoided. Specially tested solar goggles will be available in the different locations of Mysore and Bangalore for very reasonable price, say Rs. 30 to 50. These goggles are absolutely safe to watch any type of solar eclipse.

Facts and Figures about Solar Eclipses

From Mysuru, the best viewing location is Chamundi Hill. Large telescopes or high magnifications are of little value for observing a lunar eclipse. It is always recommended using binoculars or a small low-power telescope, since they both allow the entire Moon to be viewed during the event. Next solar eclipse can be seen on December 14, 2020, but not from India. So, do not forget to witness the solar eclipse on June 21. Enjoy the rare celestial feast.