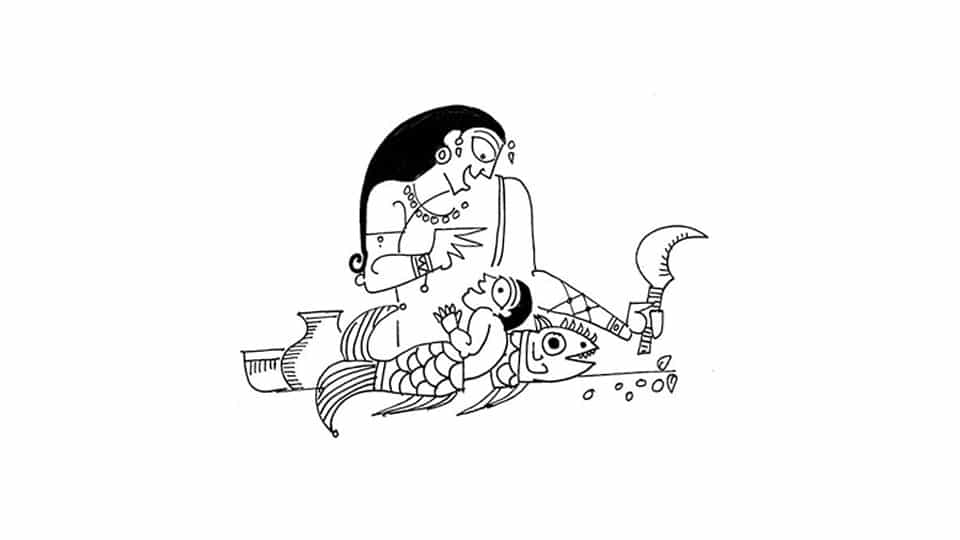 Between the 5th and 10th century C.E., we find the development of Puranic literature. Many stories explained the relationships of Vishnu’s many avatars. One story that merits attention is the story of Pradyumna, the son of Krishna and Rukmini. The story is told very differently in the Hindu tradition and in the Jain tradition.

In the Hindu narrative from Bhagavata Purana, we are told that soon after his birth, Pradyumna is abducted by a demon called Shambara, who throws him into the sea. He is swallowed by a fish. The fish is caught by fisherfolk and it finds its way into the kitchen of Shambara’s Palace.

Shambara’s wife, Mayawati, cuts the fish open and finds a little baby inside. She raises this child, and as the child grows up to be a handsome young man, she falls in love with him. The boy resists her advances, because he finds a relationship with his foster mother inappropriate. But he is unable to resist his attraction. He is then told that his feelings and the relationship are valid because Mayavati is Rati reborn and he, Pradyumna, is Kama reborn.

When Shiva opened his third eye and destroyed the Love-God, Kama, he promised Kama’s consort Rati that Kama would be reborn in Vishnu’s family. Pradyumna is Kama reborn and Mayavati is Rati reborn. So, Kama-Pradyumna marries Rati-Mayawati, despite the difference in age and the awkwardness of their relationship.

Pradyumna even kills his foster father Shambara and returns triumphant to Dwarka to meet Krishna and Rukmini. This is a very unusual tale, where there is an older woman marrying a younger boy, a foster son at that.

The Jain narratives from Harivamsapurana and Vasudevahindi, however, written in the same period, present the relation between Pradyumna and his foster mother in a very different light.

Here, great value is given to a series of rebirths. In a previous life, Pradyumna abducts a woman causing her husband great grief. The woman he abducted is born as Kanakamala/Kanchanmala.

Kanchanmala’s husband of that previous life is reborn as a demon called Dhumketu. Dhumketu abducts Rukmani’s infant son, Pradyumna, and throws him into the sea. Pradyumna survives in the belly of a fish. Kanchanmala finds him. She uses magical power to transform him into a young man and, as is in the Hindu narrative, she expresses her desire to him. Here, Pradyumna resists his foster mother’s advances, saying that it is inappropriate.

She tries to bribe him by giving him magical powers. While he receives the magical powers, he refuses to accept her offer. Angry, she accuses him of rape. So Kanchanmala’s sons try to destroy Pradyumna. They throw Pradyumna into a cave, a firepit, into a lake, into a pond. Each time, Pradyumna encounters magical beings, like nagas, who are impressed by his beauty and his valour. They give him gifts in the form of jewels, clothes and weapons. Thus, the encounters transform him into a heroic being who returns home to meet his parents.

Thus, we find two different traditions approaching Pradyumna very differently. Today, of course, not much is known about Pradyumna. Our Victorian moorings prevent us from reading these awkward tales. We just know him today as a good son of Krishna, father of Aniruddha. He is eventually killed at Prabhas Teertha, as per the Mahabharata.