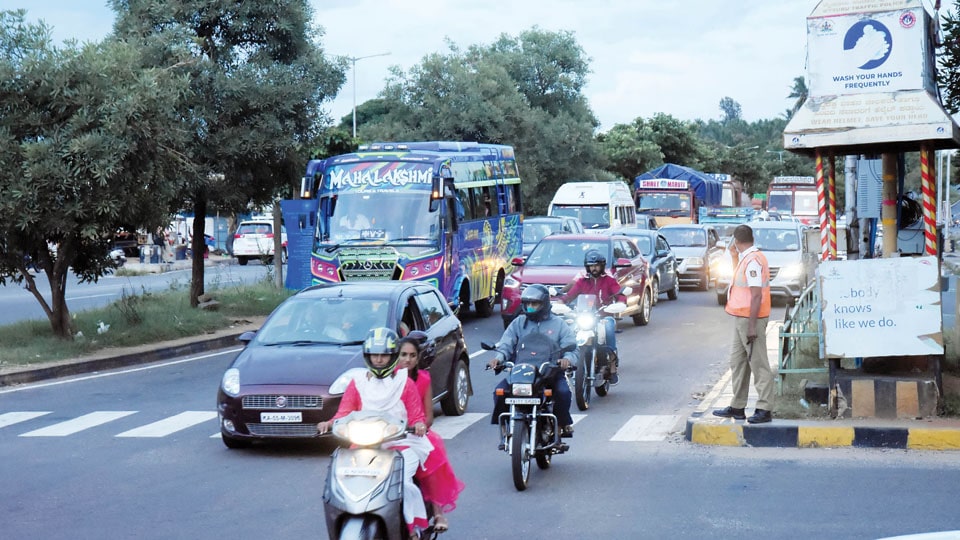 Mysore/Mysuru: The City Traffic Police are asking erring motorists, who were issued e-challans for traffic violations, to pay the fine within a stipulated time or be present at the Lok Adalat and hire an advocate to settle the case.

If the unpaid fine is not paid within the stipulated time, the motorists would receive an                              SMS that is sent by the District Legal Services Authority (DLSA) and this is considered as notice from the Court. The SMS is actually a pre-litigation notice asking the violators to be present before the Lok Adalat.

Those who fail to appear before the Lok Adalat on the said date and do not pay their dues will have to face prosecution before a regular court and may have to pay a higher fine. The motorists are sent an SMS which contains a link, from where the notice can be downloaded and paid.

Here is the format of SMS

AD-LOKADL: This is a Lok Adalat Notice issued by District Legal Services Authority, Mysore http://website link, vehicle registration number = KA-09-XXXX. You are called upon to pay the fine amount of Rs. 1,000 for the traffic violation against vehicle Reg. No: KA-09-XXXX. The fine shall be deposited via online or offline mode as mentioned in the notice to avoid legal action from DLSA and Mysore City Police.

Once the user clicks the website link provided in the SMS, it takes the user to a web page where the entire notice is displayed asking the violator to pay the fine amount.

The provision of displaying the web page in English and Kannada has been made so that the violator can understand the notice properly.

The notice reads, “If the fine is paid immediately through e-challans through KarnatakaOne Webpage, or by visiting the nearest Police Station at the earliest possible (all method of payment described) or else your matter will be taken up before the National Lok Adalat to be held on 25-June-2022.”

Notably, if the case is listed for hearing in the Lok Adalat, the violator has to hire an advocate who will argue before the judges and the Police will present the photos and videos of the recorded violation. In addition, all the previous offences committed on the roads on that particular vehicle will be listed and the violator will have to pay the fine for all the offences. Even the advocate fee has to be paid.

The Traffic Police have taken this route to recover crores of rupees pending fines for the years 2019, 2020 and 2021. Despite all efforts, violators continue to roam freely without paying the fines. As such, the Police have coordinated with the DLSA to implement this new SMS system.

In many cases, even before the notice is sent to a particular violator, the SMS reaches his mobile phone, asking him/her to pay up. In fact, many vehicle owners have paid up fearing that they would have to be present before the Lok Adalat.

“So far, this is the best way to recover the pending unpaid fine amount. Earlier, we used to send the e-challans by post but many times, the owners would have changed their addresses or even put fake number plates which resulted in piling up of the fine amount. Now we are bringing these defaulters before a Lok Adalat. We have launched this initiative last month and this is a coordinated effort of the Police Department and DLSA to bring defaulters before a Lok Adalat.” — M.S. Geetha Prasanna, DCP, Crime and Traffic