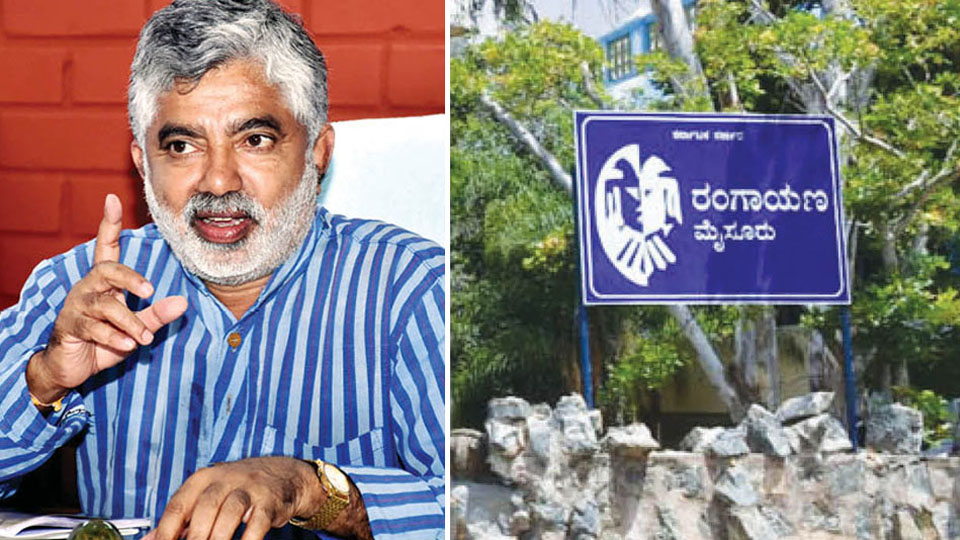 Mysore/Mysuru: Rangayana Mysuru Director Addanda C. Cariappa has alleged that a few vested interests have been perpetually trying to tarnish the theatre repertory’s image and this time they have raised the issue of guests being invited for the Bahuroopi Theatre Festival.

“In the beginning they raised the issue of guests and now they are diverting the attention to some other issue. These people have not only misused the Rangayana premises for their malicious activities but have also threatened to stop this year’s Bahuroopi Festival. They are unable to digest the good work done after I took over as the Director and have been after me ever since I assumed the post,” Cariappa said.

In a press release, the Rangayana Director has said that he took over the administration of the famed theatre repertory on Jan. 1, 2020 and a vested interest group has targeted him since the very first day and found fault with whatever programme or project Rangayana conducted. “They highlighted my anti-Tipu Sultan stand and using this as an excuse, they staged protests in front of Rangayana during the last Bahuroopi and issued several media statements. Their declared sole intention was to force me to resign. They have also been threatening to stop the scheduled Bahuroopi. But I was not cowed into submission and continued performing my duties,” he said.

“These elements again targeted me when the guest list for the current year’s Bahuroopi was announced. For the festival, Padma Shri Matha Manjamma Jogati, Padma Shri Tulsi Gowda, member of Mysore royal family Pramoda Devi Wadiyar, advocate and actress Malavika Avinash, Na. D’Souza, H.S. Venkatesh Murthy, Chakravarthi Soolible, Vijayalakshmi Balekundri, Aa.Sri. Anand, Suresh Heblikar and T.S. Nagabharana were invited as guests. Let the conspirators see the full guest list. Have I invited only guests who follow Sangh Parivar ideology? There are invitees who follow different ideologies. Being a government institution, I cannot invite only those who follow the ideology of these conspirators. Let them see if there is any communal angle to this and then make their stand clear,” Cariappa reasoned.

Denying that Rangayana has been misused to spread communal hatred, as alleged by conspirators, Cariappa said that during his tenure as the Director many popular plays with social messages like ‘Parva’, ‘Mookana Makkalu’, ‘Sita Swayamvara’, ‘Kododilla-Bidodilla’, ‘Soothradhaara’, ‘Macbeth’, ‘Kadadida Neeru’, ‘Tamra Pathra’, ‘Chitrapata’ and ‘Chandragiriya Theeradalli’  were staged and got overwhelming response from the audience. This apart, street plays like ‘Arivu’ and ‘Moodali Belaku’ were staged,” he said.

There has been a demand for my resignation for what reason I do not know. But I have been working sincerely for the last two years. More than 500 saplings have been planted in Rangayana since I took over creating a green environ. All the wasteful expenditure has been curbed. Even during COVID pandemic, more than 30 artistes were paid a monthly honorarium of Rs. 20,000 to Rs. 25,000. The B.V. Karanth Rangamandira was constructed without using Government funds. The Bharatiya Ranga Shikshana Kendra (Theatre School) too was running successfully.

Without any grants, a bus worth Rs. 35 lakh has been added to the Rangayana assets. A few vested interests are continuously trying to tarnish the image of the theatre repertory as they are unable to tolerate the good works done by me. Their main intention is to despise the good work done by me and their only agenda is to seek my resignation due to my anti-Tipu Sultan stand and to keep Rangayana captive with their own ideological agenda. I request art and theatre lovers to see the truth and the sinister designs of the conspirators behind the conspiracy. — Addanda C. Cariappa, Director, Rangayana Mysuru

“The play ‘Chandragiriya Theeradalli’ was based on Muslim writer Sara Aboobakar’s novel and ‘Soothradhaara’ has been designed keeping in mind the plight of the Scheduled Caste population. Is there any communal hatred or controversy here,” Cariappa questioned.

“When Rangayana began its work on ‘Parva’ play, the same groups targeted me and alleged that funds had been misused. But these allegations were levelled at me even before the Government grants came for ‘Parva’. Some of the people who had joined the protest meeting against me worked in the ‘Parva’ project as technicians and took money for their work,” the Rangayana Director stated.

There is neither confusion nor any problems in Rangayana as alleged, he said and stated, “Rangayana artistes have clarified through media statements that they have no problems here and they should not be used as pawns to fulfil the desires of vested interests. Despite this, artistes are being instigated and they are being pressured to give media statements against me. Conspirators are indulging in mental torture and are being coaxed to boycott staging of plays and raise their voice against the Director.”

“Artistes are being forced by these elements to go against Rangayana, so it can be kept captive like in the past after B.V. Karanth and for a short period thereafter. But this manipulation will not work now,” Cariappa said.