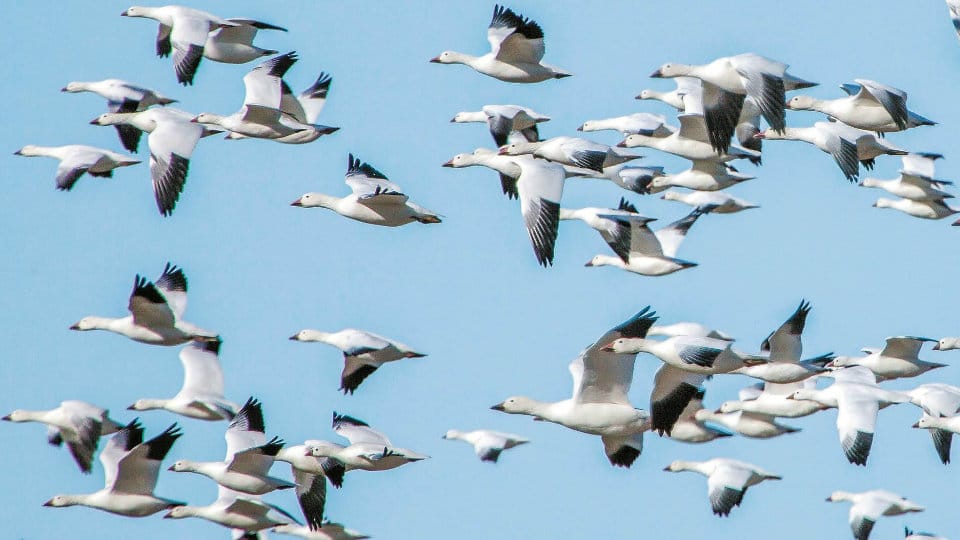 In this week’s Pet Talk, Maneka gives tips on how to help migratory birds and how to safely discourage a monkey

Should elephants be domesticated?

Domesticated means that elephants have lost all wild instincts and are totally adapted to human life. Elephants need to be beaten and starved for months. They undergo brutal training to accept human contact, but they still keep their wild instincts because they are wild animals.

Thinking of elephants as domesticated is a big misconception because that makes people comfortable with the idea that they can be chained and confined to small spaces. They are herd animals and they are extremely unhappy in human surroundings. They have to be kept tied up and most elephants kept by humans, or temples, are beaten and mutilated regularly because they are not tame able.

How can we help migratory birds?

• Make a list, if possible, of which birds come to your area, and which trees they nest in; • Keep your pet cats indoors as far as possible; • Eliminate the use of pesticides for the plants in your backyard; • Reduce your carbon footprint; • Keep bird feeders and bird baths in your backyard. Make sure to keep them clean to avoid diseases; • Plant fruit and berry bearing plants; • Mark windows to avoid bird collisions with your window; • Avoid the use of plastic bags; • Help keep local water bodies clean; • Prevent anyone from killing the birds. These are often hunted. Patrol the markets and have any sellers of these birds arrested.

How can I help to save house sparrows from dying out from cities?

It may be too late to save the sparrow, as most of them have disappeared. However, if you do see any in your colony you can try to help them multiply by doing the following: • Hang bird nests on your property to encourage breeding. Sparrows breed four times a year; • Kitchen waste should be separated between biodegradable and non-biodegradable. This promotes decomposition and the development of microbes that the birds feed on; • Keep your pet cats indoor as far as possible; • Reduce your carbon footprint; • Keep bird feeders and bird baths in your backyard. Make sure to keep them clean to avoid diseases; • Plant fruit and berry bearing plants on your property. Put creepers, like bougainvillea, as sparrows often nest in them.

What are the sign and symptoms of worms in cats?

How can I get rid of ants without killing them?

Ants hate strong smells. Use essential oils, haldi or vinegar at the entrances or any paths from which they enter. This disrupts their scent trails and makes it harder for them to reach the food source they are invading.

Use a chalk to draw lines. Ants stumble on the chalk particles; Keep food articles sealed; Fill in gaps or cracks on walls or floors on time; Lemon or coffee grounds can also be used at entrances and paths because of their strong smell; Keep your house clean and especially areas that have been previously affected by ants or are already affected; Keep the trashcans closed.

What do I do if I get stung by bees?

Remove the stinger. It should be scraped off instead of being pulled out. Rub with a raw potato.

Dogs eat a lot of protein. This breaks down in their bodies and is excreted as nitrogen in the urine. The result is a killing of the grass from an overload of nitrogen.

What is pica? Can it also occur in cats just like in dogs?

Feline with a mild case of pica may suck or lick inedible objects, but not actually consume the object. In severe cases of pica, the feline will consume the object completely. Some objects could be yarn, electric cords, plants, fabric and wool. Pica in cats is the act of eating objects that are not food.

Yes, pica also occurs in dogs. It is more common in female canines.

What is a natural antibiotic for chickens?

If birds eat uncooked rice, can it swell up in their stomach and kill them?

This isn’t true. Ornithologists write that rice is perfectly safe for birds to eat. Wild rice is a dietary staple for many birds, as are other grains, such as wheat and barley, that expand when they absorb moisture.

The rate at which dried grains absorb liquids is really slow except when they are being cooked. Besides, like people, birds can digest things too.

Long before any uncooked rice consumed by a bird could expand and harm the animal, it would have already been ground up in the bird’s crop and well into the process of being broken down into nutrients and waste by the acids and enzymes in its digestive tract.

How do I spot ear mites?

There are several types of mites that can live in your dog’s ear, but the most common are Otodectes cynotis — tiny, eight-legged parasites that feed on the wax and oils in a dog’s ear canal.

An individual mite has a three-week life cycle, and is barely detectable by the naked eye. Causing irritation and inflammation, ear mites can infect the external and internal canal, and lead to more serious skin or ear infections if left untreated. Infection usually produces a characteristic dark discharge; in some cases, the ear canal can become entirely obstructed by this coffee ground-like debris.

What are the little white things under my cat’s tail and on his stool?

The little white things are tapeworms. Long and flat, tapeworms are segmented parasites and range from 4 to 28 inches in length.

My cat has tapeworms. How did this happen? What should I do?

Cats acquire tapeworms by ingesting an intermediate host, like an infected flea or rodent. When cats are infected, tapeworm segments — actual pieces of the worm that resemble grains of rice — can often be seen on the fur around a cat’s hind end. Take the cat to the vet for a prescription. Once a cat is rid of tapeworms, the best way to keep her clean is to keep her flea-free. Flea treatment consists of two treatments, 30 days apart, to ensure that the fleas and their eggs are eliminated during the entire cycle of fleas hatching.

Should I feed a monkey near my residential community? How to safely distract and discourage a monkey?

No, monkeys shouldn’t be fed. As per a study, conducted by ATREE and NIAS in West Bengal, researchers found that human processed food products cause hormonal imbalances, mood swings and increase in inter-group aggression among monkeys. Also, the act of feeding monkeys makes them become used to being fed by humans and thus they actively seek provisioned food. This makes them more likely to attack humans. Too many people feed them  small amounts at different times of the day keeping them hungry and aggressive. Too many people feed them only on Tuesdays which makes them angry for the rest of the week.

Plant fruit trees which monkeys eat round the year — mangoes, jamuns, guler — so that they remain in the trees. But plant them in clumps near a forested area.

In order to discourage monkeys: Use fully secured trashcans; Don’t feed monkeys; Make sure windows in your house are secured and doors are closed at all times; Keep a dog; If you safely scare a monkey away, it will think your community is not a safe place to be; Don’t stare at a monkey, corner it or approach it; Identify an exit and encourage the monkey to leave by stomping or hitting the ground; Never hit a monkey; If there are young monkeys and babies then be extra cautious and try to lower your head and move away slowly.