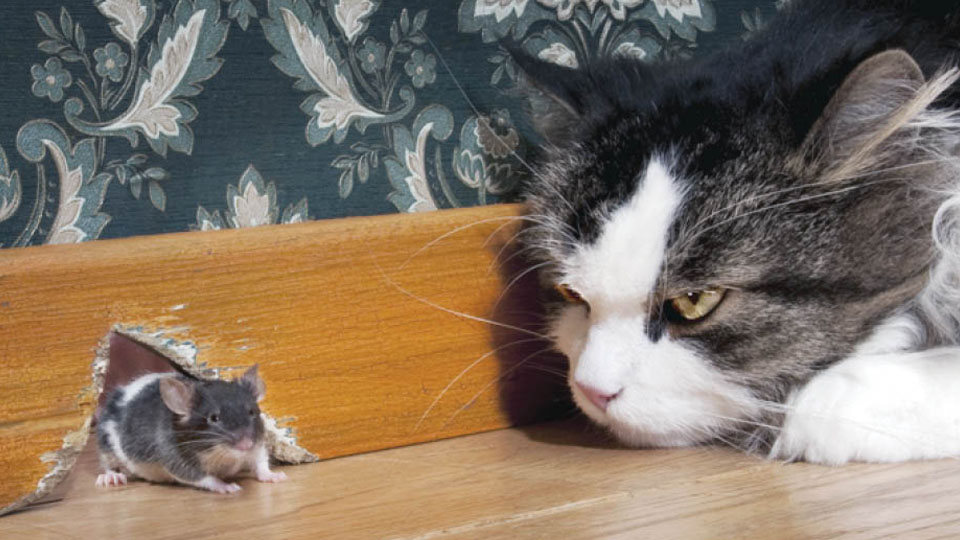 In this week’s Pet Talk, Maneka tells how to identify an aged cat and the difference between rats and mice.

What is the average lifespan of a cat?

How to tell if a cat is male or female?

If you look at a female cat’s genital area, the space just under her tail, it will look like an upside down exclamation point (!) with the long slit of the vaginal area below the anus.

The male cat has a narrower space between the anus and the penis, with the testicles in the middle. Most neutered male cats will still show the vestigial remnants of a testicle sac, and the anus and penis will still be relatively close together.

One other, simpler (but less reliable) way to tell the sex of your cat is by the colour of its coat. Cats with three colours — white, black, and orange — are sometimes called tortoiseshell cats. Such cats are almost always female. Orange cats are most often male though there are certainly orange females as well, so this is not a reliable technique.

What are five common symptoms to determine aged or senior cats?

Do cats have menopause?

Only humans, and some apes, go through menopause. Other species, including cats, continue to have oestrous cycles throughout their lives. As cats age, the cycles might be less frequent and fertility declines.

How does your house attract rats?

Rats can live on just an ounce of food and water each day, so, when food is bountiful, they will make themselves at home. Rats are attracted to homes, businesses and restaurants, and they will feed from the trash if it is left uncovered, or if they can gnaw through a receptacle to gain entrance.

Signs that rats have invaded a home or business include gnawing and scurrying sounds in the attic or walls, as well as chewed spots, wood chips, wood shavings and tooth marks in baseboards, windows, doors, electrical cords or even packaged foods. Droppings are also a definitive sign of a rat infestation. Although rats can grow quite large, they are flexible and can fit through very small openings, including holes and cracks in foundations or walls, even if the opening is as small as a dime. They also enter through vents, open windows and grates. Even openings that are made for wires and pipes in the foundation of a home can give rats access.

What is the difference between rats and mice?

Mice — • Size: House mice measure 12 to 20 cm in length, including the tail, and weigh 12 to 30 grams; • Colour: They may be white, brown or grey in colour; • Head: Their snouts are triangular and feature long whiskers; • Tails: Mice have large, floppy ears and long, thin, hairy tails; They can live up to six years in captivity though most naturally live less than a year. Mice are nocturnal, timid, social and territorial in nature.

Rats — • Size: Rats are medium-sized to large rodents. However, rats may grow to be as long as 40 cm or more and weigh considerably more than mice; • Colour: Their coats are white, grey, brown or black in colour and are often soiled enough to leave grease marks on touched surfaces; • Head: The snout of the rat is blunter than that of the mouse; • Tails: Long tails that are commonly hairless and scaly.

Rats are very clean animals and groom themselves several times a day. Rats prefer to live in a clean habitat and they do not have a naturally strong or offensive odour.

Do horses get fleas?

Horses can get fleas, although it’s not very common. They tend not to get infested, but they can be affected by them.