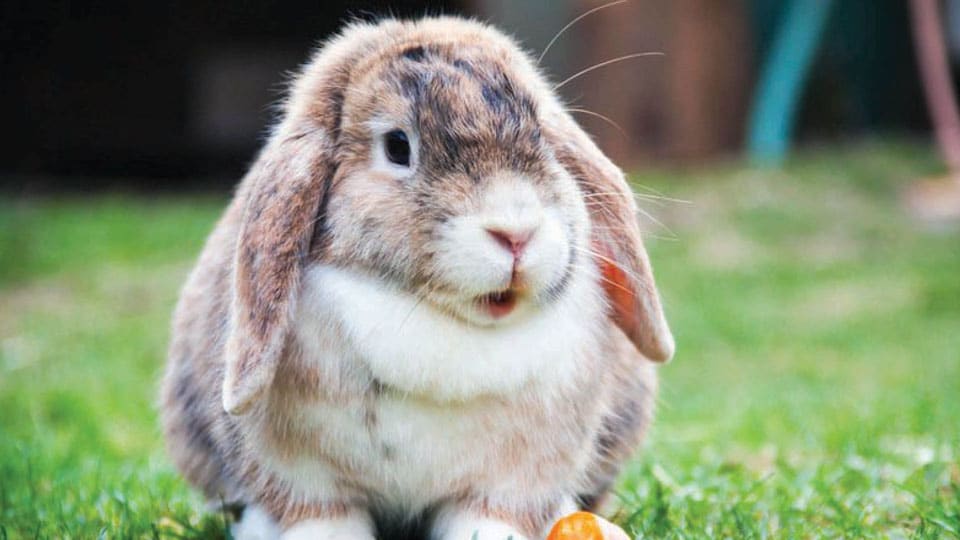 In this week’s Pet Talk, Maneka Gandhi gives a checklist to call a rabbit healthy

Yes, it can. Pasteurella multocida is a gram negative bacteria of which there are several strains. Signs and symptoms of pasteurella infection (pasteurellosis) usually involve the upper respiratory tract. Infected rabbits may have a watery nasal discharge and sneezing, followed by a thick, whitish or yellowish nasal discharge. Rabbits seem to be very susceptible to the germ Pasteurella multocida. Pasteurellosis drains the immune system, and if the rabbit doesn’t die from snuffles (pasteurellosis caused by P. multocida), it can die from related or opportunistic infections, such as pneumonia or staph infections.

Why is my rabbit not acting normal?

They hide signs of illness until very late in the progression of the illness so that, by the time you observe them, they may be quite ill. If your rabbit isn’t acting himself/herself, there’s probably something going on. You know your rabbit and what his/ her normal behaviour is. It may be time to go the vet.

How do you treat burning urine in rabbits?

Burning urine is thick, beige- or brown-coloured urine. Urinary incontinence, especially during confinement or at places that are not customary (locations he has not peed before). Frequent urination, but only in small amounts. Skin scalding/ burns due to urine, especially around genitals and hind legs, tells you about burning urine. This can be cured by asking the vet for pain relief/anti-inflammatory treatment for the rabbit. A low dose of Metacam, once daily, can alleviate the pain and discomfort.

A rabbit is a very delicate animal. Rabbits are social animals that require a lot of individual attention. They need daily exercise and playtime and not rough handling. If you are getting a rabbit then you have to train your child on how to interact and care for the rabbit.

What is a healthy rabbit?

It’s relatively easy to recognise the basic signs of a happy, healthy rabbit:

An alert expression. Does your rabbit show a keen interest in her surroundings? Does she exhibit enthusiasm when she sees you? These are excellent signs of rabbit health. Your rabbit may not seem alert all of the time (after all, they get sleepy sometimes), but pronounced lethargy or dullness can indicate a problem. Like many animals, rabbits may hide injuries or illness in order to avoid appearing vulnerable to predators.

A clean, dry nose. Your rabbit should have dry nostrils. Significant nasal discharge or persistent sneezing can be symptoms of pasteurella, more commonly known as snuffles.

Bright eyes. Rabbits seem to epitomise the old saying “bright eyed and bushy tailed.” Has your bunny perfected that endearing, intent gaze? Are those big brown (or blue or red) eyes bright and free of discharge? Watery eyes can be another sign of snuffles, or could potentially indicate an allergy or other medical issue.

Clean ears. The ears are, obviously, one of the most iconic characteristics of a rabbit, and clean ears are an important part of good health. Watch for scabby, crusty areas inside your rabbit’s ears, as these can be symptoms of an ear infection known as ear canker. Your rabbit’s ears should also be free of mites, wax, dirt and other debris. Rabbits control their body temperature through the blood vessels in their ears, which can help you detect a fever or other change in your rabbit’s temperature. Take steps to keep your pet cool in order to prevent overheating. If you notice a head tilt in your rabbit, this could indicate an inner ear problem.

Correct teeth. Because rabbits’ teeth grow continually throughout their lifetime, they can be prone to developing dental problems. Malocclusion (essentially the misalignment of the teeth) can cause significant problems and requires veterinary attention. Keep an eye out for excessive drooling, as this can be an indication of a dental issue.

Healthy fur. Aside from occasional seasonal moulting, your rabbit’s fur should appear healthy for its type, whether she has luxurious Angora wool, velvety Rex fur, shiny Satin fur or attractive “normal” fur. Watch for dull coats, unexplained hair loss, bare spots or excessive itching, as these could indicate a problem with parasites or illness.

Good feet. Check those toenails regularly — rabbit   toenails can grow very quickly and need to be trimmed on a regular basis. You’ll also want to watch for the appearance of any crusty, weepy, sore spots on your rabbit’s hind feet; a condition known as sore hocks. Your rabbit should also exhibit a normal gait when walking, and not show any signs of limping.

A good appetite. While she might not choose to chow down in front of you (some rabbits prefer to eat in privacy), a healthy rabbit has a good appetite and eats and drinks approximately the same amount each day. If you notice that your rabbit suddenly seems uninterested in her food or water, it’s time to investigate further.

Normal droppings. Your rabbit’s faeces should be round, uniform in size and consist mainly of hay. Regularly check your rabbit’s droppings for any abnormal signs. Rabbits also produce Cecotropes — small, soft pellets that appear darker and moister than faeces. Cecotropes contain vital nutrients and are a necessary part of your rabbit’s diet, so don’t be alarmed when you see your rabbit eating them.

Do rabbits need treatment for parasites?

Some of the Parasites that Rabbits get are:

Fleas – Rabbits have their own species of flea called Spilopsyllus cuniculi. This is seen occasionally in pet rabbits. The main concern with this parasite is that it can spread myxomatosis between rabbits.

Mites – The most common mite in rabbits is Cheyletiella parasitovorax or ‘walking dandruff’. This is usually seen as an area of white scurfy skin, usually on the back or between the shoulder blades.

Lice – Haemodipsus ventricosus is the rabbit biting louse. It can be seen with the naked eye. It is often an indication of poor husbandry, especially in breeding colonies.

Fungal Infections – ‘Ringworm’ occurs in rabbits but it is not common. It is not a worm at all but a fungal infection usually caused by Trichophyton mentagraphytes or Microsporum canis.

Internal Parasites – Regular de-worming of rabbits (as is essential for cats and dogs) is not necessary. Worm infestations, of either round or tapeworms, are possible but rare in pet rabbits.

In most rabbits with E cuniculi, the treatment is two-fold: treating with an anti-parasite drug such as Fenbendazole (Panacur®) for up to 28 days, along with nutritional and supportive care.

Can rabbits die from worms?

Worms that are harmful and may cause death to your rabbit are:

Worms: Pinworms are the most common type found in rabbits, but they can also get roundworms, whipworms or stomach worms. Symptoms can include weight loss or failure to gain weight. Obeliscoides cuniculi is a stomach worm that can infect rabbits that eat fresh grass, but your pet may not exhibit any symptoms unless the infection is severe. Seek veterinary care immediately if you notice lethargy, appetite loss or weight loss.

Cuterebra fly larvae and other maggots: Cuterebra flies often lay their eggs in grass, and when the larvae hatch, they can hitch a ride on your pet and burrow into her tender skin. If you spot a small circular, hole or a lump, call your veterinarian immediately. But don’t squeeze this bump — doing so can jolt your bunny into shock, causing seizures and possibly death.

Do rabbits need their teeth clipped?

No. Teeth clipping involves using regular nail clippers to cut the teeth as you would cut toenails. There’s a high risk of cracking or splitting the tooth, because of the force needed to use the clippers. This method can cause pain if the tooth splits up to the nerve, or is trimmed too short.

Rabbits have open rooted teeth, which means that their teeth continuously grow. With the right diet, this shouldn’t be a problem since their constant chewing should give plenty of abrasion that naturally wears their teeth down. However, if they don’t get to chew enough, their teeth could grow very large, and they might start chewing on things they shouldn’t be chewing on. If your rabbit starts drooling, eats less, starts losing weight, and doesn’t groom itself as often as it did, these could be signs that the teeth are overgrowing.