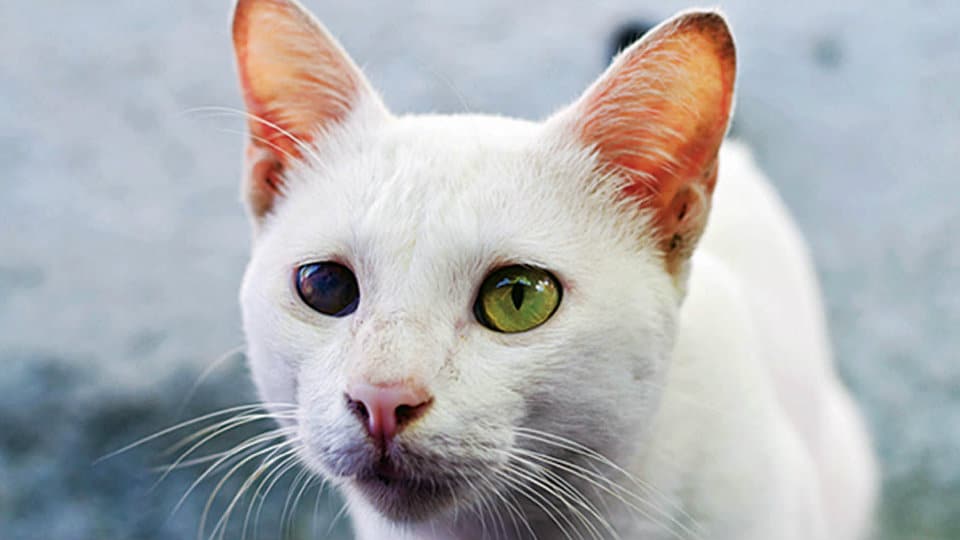 In this week’s Pet Talk, Maneka details on Cataract, Pseudo-Pregnancy and Anisocoria in cats

I recently noticed a discolouration in the centre of a 4-month-old kitten’s eye — it’s like a cloudy circle but has no discharge or irritation to the eye?

An opacity in the lens of the eye is most commonly attributed to either a cataract or sclerosis of the eye. Sclerosis only occurs in cats in old-age, so in this case your kitten is likely to have developed a cataract. However, a cataract can only be confirmed by a thorough veterinary examination, and your vet will design a treatment plan to not only cure the cataract but will address the underlying cause.

A cataract describes any opacity in the normally clear lens of the eye, and prevents light from reaching the retina at the back of the eye, sometimes eventually leading to blindness. Inherited conditions are the most common cause of cataracts and may be present at birth, or develop when the animal is very young. They can also be caused by injury, or illness such as diabetes, in which case treatment of the underlying condition is essential – if your kitten has diabetes, failure to treat this will lead to further complications. Cataracts can be removed surgically by a veterinary ophthalmologist, who will replace the lens with a plastic or acrylic prosthetic lens to allow for more focused vision. Cataract surgery requires a lot of postoperative care. I am not sure anyone in India can do it.

My pet cat is four-months-old. I find his tongue very scratchy. Should I be concerned?

A cat is a predator. Its natural food is prey that it catches. A cat’s tongue is scratchy because it is lined with papillae — tiny elevated backward hooks — that help to hold its prey in place.

My cat got unwell when I gave him cow milk. Why would that happen?

Cats are lactose intolerant. They cannot digest and break down cow’s milk proteins. They do like milk and cream though and will drink it if given. While a kitten won’t get affected by cow milk but once she is an adult, cow milk will cause gas, diarrhoea etc. You need to supplement her diet with many other foods.

My cat’s pupils are unequal in size. Is this important?

The pupil is the opening in the centre of the eye that allows light to pass through. The pupil expands when there is little light present, and contracts when there is a greater amount of light present. Anisocoria refers to a medical condition of unequal pupil size where one of a cat’s pupils is smaller than the other. With proper detection of the disease’s underlying cause, a treatment plan can be made to resolve the issue. Anisocoria may be an indication of a serious injury or disease, so a prompt medical diagnosis is essential.

The most noticeable symptom is when one pupil is visibly smaller than the other, but there may also be concurrent pain, such as pain in the eye, or pain in the head. Pain may be evidenced by pawing at the head or tilting the head to one side. Confusion may also be present, which may indicate head trauma or internal pressure.

There are several potential causes of an altered pupil size in cats, including inflammation in the frontal region of the eye, increased pressure in the eye, diseases that are focused in the iris tissue itself, a poorly developed iris, scar tissue build up in the eye, medications, or tumours. See a proper eye doctor not a vet.

What does it mean when a cat shows signs of pregnancy when there’s no way she could be pregnant?

If the cat is bred, her body ovulates and produces a gland that is developed in the ovaries after ovulation. This gland produces progesterone, which may lead to typical pregnancy symptoms. Sometimes even a sterile breeding produces this gland. The phantom pregnancy may occur even in spayed cats, in case they were spayed during the diestrus stage of the reproductive cycle. In very rare cases, cats with hypothyroidism can present symptoms of pregnancy without being pregnant, due to diverse blood changes.

In case your cat displays signs of phantom pregnancy, you need to treat her normally. If she is seeking more attention, give it to her. All you can do is wait until the cat gets over her false pregnancy behaviour. The symptoms of pseudo-pregnancy may persist for several months.

My cat falls asleep while standing and falls over?

Narcolepsy is a disorder that affects the way an animal is able to physically operate. It is symptomised by excessive daytime sleepiness, lack of energy, and brief losses of consciousness. During a narcoleptic episode, the affected cat will collapse onto its side or stomach, its muscles will slacken, and all physical movement briefly ceases. It is just as if the cat has suddenly fallen into a deep sleep. Closed eye movement continues, as with the stage of REM sleep. The episodes are typically brief and go away by themselves. Generally, narcolepsy has not been linked to any underlying cause. Some of the suspected causes that are still being studied are disorders of the immune system and disorders of the nerves.

Why is my sheep losing its wool?

One of the major reasons for a sheep losing its wool is because of the lice, or fleas, she might have got from the environment the sheep is living in, depending upon how poor the hygiene and cleanliness is.

Another major reason is the Sheep Scab. It is the most misdiagnosed, and incorrectly treated, skin condition of sheep. A huge amount of time and money is wasted by people who misguidedly treat sheep for the wrong skin conditions. Sheep Scab and infestations with lice are most frequently confused.

Scab is caused by a tiny parasitic mite, which lives on the skin surface, called Psoroptes ovis. It looks like a crystal of brown sugar. The condition is highly contagious, causes intense irritation, scratching, nibbling and wool loss. Some sheep spend so much time rubbing that they do not eat, lose weight, start to have epileptic fits and ultimately die. However, not all sheep infested with scab mites will scratch or rub.

Dips and pour-ons can be used to prevent infestation, especially if sheep are on common land.

Some sheep can be infested with both scab mites and lice at the same time. It can get quite complicated. Either suitable dips can be used which treat for both scab and lice or pour-ons can be used to target lice, then three days later an injectable preparation which will treat for scab.

When do puppies lose their baby teeth?

Puppy teeth are sharper than adult dog teeth. Unlike humans, dogs usually don’t notice, or feel the difference, when they lose a tooth. Hence the phenomenon often goes unnoticed. The sharper baby teeth make up for a lack of jaw strength, while the stronger permanent teeth allow for better positioning and greater durability. Most dogs lose their baby teeth around 3 to 6 months. The teething period can be frustrating; the puppy clamps his mouth on everything he can reach, from body parts to sneakers, in an attempt to relieve the discomfort. Teething can be accompanied by drooling, irritability, and fluctuations in appetite.

I rescued some dogs from my alley and took them to a shelter. The shelter’s staff wasn’t as pleased as I was. Did I do anything wrong?

There is no point in rescuing healthy dogs. You should feed them and look after them in your alley itself. It is cruelty to expose them to the illness of a shelter, or to have them locked up for no reason. If they were ill enough to be taken to a shelter then you should be paying for their treatment and not hiding behind the excuse that they’re not your personal dogs. All shelters are overcrowded and underfunded. You should have given them money for the treatment and food and, once they are well, you should take them back. Shelters are communal resources and shouldn’t be taken advantage of to salvage your conscience, or to make you feel good. They are all run by small NGOs who get no funding from institutions, or government, and if they are used simply as dumping grounds they will shut down.