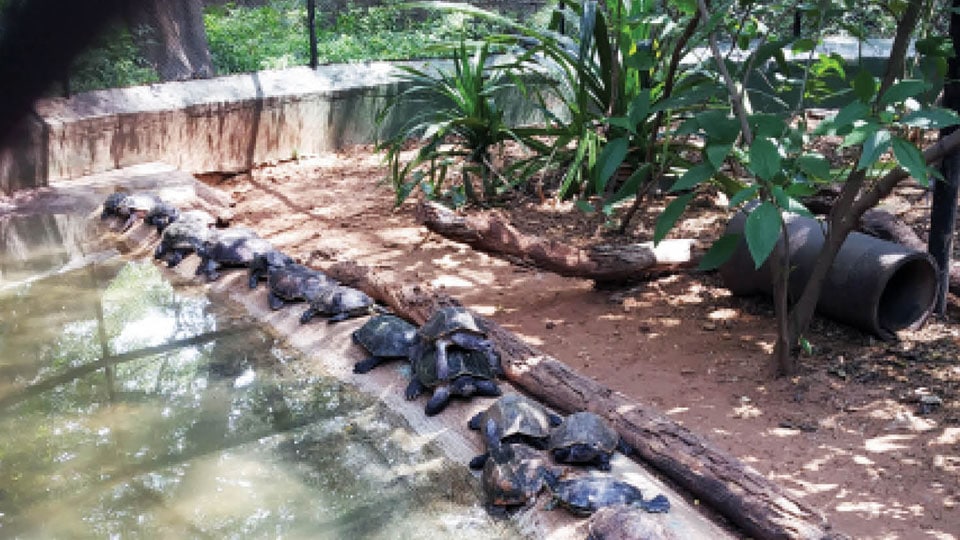 In this week’s Pet Talk, Maneka talks about turtles and its behaviour

Turtles can smell musty and fishy. Their habitats can become breeding grounds for bacteria and odour-causing organisms. They excrete in their surrounding water and thus the water gets very dirty very quickly and requires frequent cleaning to prevent bacteria build-up. This is also the reason why the water of the turtle starts smelling bad.

Do turtles bite and attack humans?

Some turtles are notorious for defending themselves by biting. Snapping turtles — of both the common (Chelydra Serpentina ssp.) and alligator (Macroclemys temminckii) varieties — are named for the manner in which they typically greet large animals — by striking their heads forward quickly and biting anything within reach. While these turtles are willing and able to cause serious injury, they only do so in defence and, given space, they will generally retreat.

Softshell turtles (Apalone spinifera ssp.) are sometimes large, primarily aquatic turtles that defend themselves vigorously if captured. Like common snapping turtles, softshell turtles have very long necks, which allow their mouths to reach almost all the way around their bodies. Even small softshell turtles can give a painful bite. Bites from large softshell turtles may be very serious.

Even commonly kept species, such as red-eared sliders (Trachemys scripta elegans), yellow-bellied sliders (Trachemys Scripta Scripta) and cooters (Pseudemys concinna ssp.), may bite if frightened. Turtles have varying personalities; some seem to tolerate handling and human interaction well, while others do not like being handled, and will attempt to bite. Biting is not limited to aquatic species; while box turtles (Terrapene carolina) usually react to threats by hiding inside their shells, some specimens will bite if handled carelessly.

No, so there is no use bringing them home illegally and trying to keep them as pets.

Most turtles do not really like to be touched, especially on their shells, and will hiss as a warning for their predators or pet owner to back off. Since they are wild animals, they are used to fending for themselves in the wild, but when they are put into captivity, they quickly learn that people are the new providers of their food, and may appear to be excited when it is feeding time. Many turtle owners have often mistaken this type of behaviour as affection; however, most will quickly find out that once the turtles have been fed, they will often prefer to be alone.

Which turtle species is the most commonly trafficked in India?

The Indian star tortoise, one of the most trafficked tortoise species in the world, catered mainly from Karnataka, Tamil Nadu and West Bengal, are smuggled to southeast Asian countries such as Malaysia, Thailand and Singapore, primarily by air from Chennai, Mumbai and Kolkata. Almost all the varieties of turtles are subjected to smuggling. Live turtles are mainly catered and traded in UP, Rajasthan, Bihar, Delhi, West Bengal, Odisha and Maharashtra. Gangetic softshell turtles and the common softshell turtles are smuggled out to Bangladesh through West Bengal both by land borders and air.

How will humans be affected if sea turtles go extinct?

Sea turtles are part of two vital ecosystems; beaches and marine systems. If sea turtles become extinct, both the marine and beach ecosystems will weaken. And since humans use the ocean as an important source for food and use beaches for many kinds of activities, weakness in these ecosystems would have harmful effects on humans.

Research has shown that sea turtles often act as keystone species. Sea grass beds grazed by green sea turtles are more productive than those that aren’t. Hawksbill turtles eat sponges, preventing them from out-competing slow-growing corals. Both of these grazing activities maintain species diversity and the natural balance of fragile marine ecosystems. If sea turtles go extinct, it will cause declines in all the species whose survival depends on healthy seagrass beds and coral reefs. That means that many marine species that humans harvest would be lost.

If turtles were to ever go extinct, seagrasses would eventually die off and this would in turn affect the marine life and eventually human life as well.

Beaches have a very fragile ecosystem in that they don’t get many sources of nutrients, hence there is very little vegetation. Sea turtles help support this ecosystem when they nest. Reason being, of the tens of thousands of eggs that are deposited by the turtles, not all will hatch. Those that do not hatch will decay and nourish the beaches. With declining turtle population, fewer eggs are deposited and this would result in lesser vegetation and this would cause beach erosion.