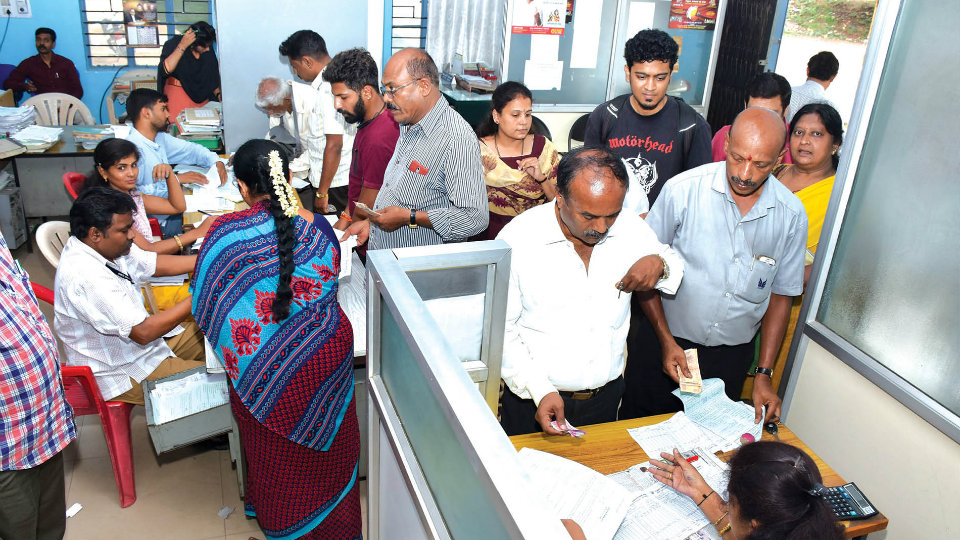 Mysuru: Always behind target in collecting property tax, the Mysuru City Corporation (MCC) has collected Rs. 56.50 crore property tax as against the target of Rs. 157 crore for the financial year 2019-20 by the end of Apr. 30, the first month of this financial year. And the good news is that officials are hopeful of reaching the target by the end this Financial Year (FY).

The MCC had offered 5% discount to property owners who pay tax in the month of April. Owing to the concession, owners of commercial and residential buildings and also site owners came forward to pay the taxes, say officials.

Speaking to Star of Mysore this morning, Additional Commissioner of MCC Shivanandamurthy, said that MCC had provided five percent discount as per the Karnataka Municipal Corporation Act, 1976, to property owners, who pay their Property Tax in advance in April and a number of property owners availed this benefit during the special tax collection drive undertaken at all MCC Zonal Offices on all working days last month.

MCC had put up a pandal and ensured drinking water facility to facilitate the property tax collection. The MCC had provided wide publicity, conducted door-to-door campaigns in all wards in a bid to enhance its revenue collection and resource mobilisation as it is a must for effective implementation of development works to ensure basic facilities for city dwellers.

Shivanandamurthy said that MCC will step up its activities of revenue collection from all property owners, Trade Licence holders and water users to reach its set target of collection for this fiscal year.

“MCC offered five per cent discount on tax amount for property owners if they pay the tax in April. And if the owners pay in May and June, there will be no penalty. However, after June and every month thereafter two per cent interest will be added,” he said.

He further said that the MCC will designate officials to all wards and they will visit house-to-house after the set deadline of payment of taxes ends on December this year for recovery of dues. “MCC will also form teams, one each for every zone, to carry out the special tax collection drive which would start after November. Notices will be issued to defaulters and in case they disregard them, action will be taken,” he added.

Shivanandamurthy said MCC had collected the property tax of Rs. 130 crore as against the target of Rs. 127 crore in the past 2018-19 financial year.

The MCC will also collect hiked property tax of 15% from next fiscal year as it had increased property and other taxes by 15% which came into effect from April 1, 2018. The revised hike will cover residential buildings, vacant sites, industries, trusts, theatres and marriage halls, commercial complexes, community halls, hotels, schools and colleges. MCC will revise the property taxes once in three years as there is a provision in the Karnataka Municipal Act 1976, Column 109 (B) to increase the tax up to 30%.  He said that the MCC expected the revenue generation of Rs. 250 crore to Rs. 280 crore through collection of all taxes from pubic this year.

There are 1.97 lakh tax payers in all 65 wards within MCC limits at present and this number will increase by formation of new layouts across the city. The revenue generation for the civic body will also increase with increase in number of tax payers. Instructions have been given to all Zonal Officers, Assistant Commissioners, and Revenue Officers to list out the new tax payers in their limits, he added.

Shivanandamurthy said that MCC has also taken measures for online property tax calculation and payment facility to see the light of the day though it is in the pipeline over the last few years.

READ ALSO  Will the MCC clear other footpath encroachments?

At present, the tax is calculated on the basis of the previous year’s receipt and in most cases there are attendants to work out the figures besides adding the depreciation on property on payment of a nominal fee. Discussion is going at the Council-level and a decision for implementation of online payment of property tax will be taken shortly, he added.

The Corporators are also demanding bringing in online system of tax collection and cited the examples of Mangaluru, Shivamogga and Tumakuru Corporations that have effectively implemented the online system.

Shivanandamurthy informed that MCC has also collected a record water cess of Rs. 58 crore as against the target of Rs. 80 crore set for 2019-20 fiscal year.

Single Window System for Tax Collection: Tender to be floated next month

Shivanandamurthy, Additional Commissioner, said that MCC has also decided to implement a Single Window System (SWS) for collection of all taxes under one roof and has given approval for software development for the same as it would help the taxpayers. Owing to implementation of election code of conduct, MCC was not able to float tender for the development of software. Now, MCC has decided to float a tender next June for the development of software for SWS.

The system will be implemented after visiting other civic bodies that have brought in the process. MCC has taken the decision of streamlining tax collection by bringing in technology as it is facing severe losses due to resource leaks, inefficient tax collection and non-streamlining of the taxation system. This system also helps MCC to mop up resources and prevent revenue pilferage.