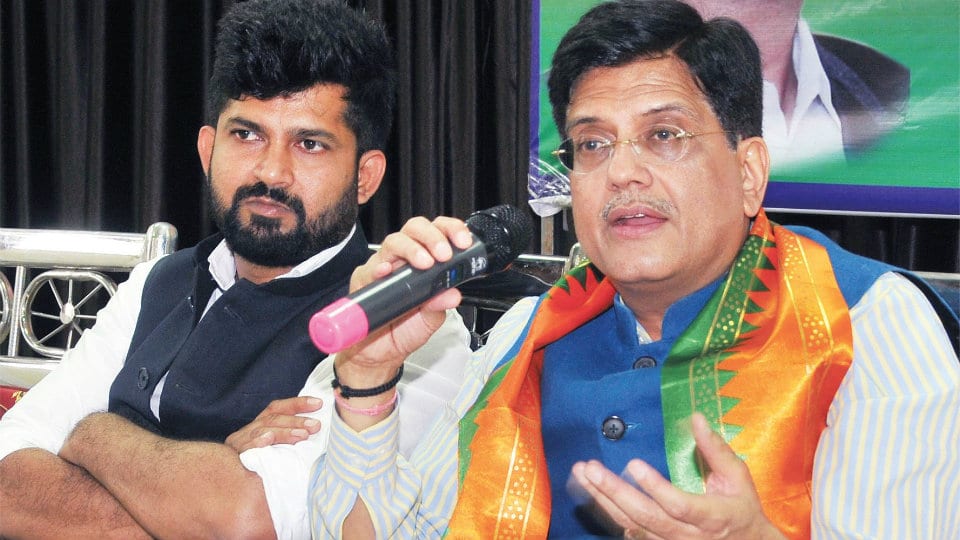 Mysuru: Union Minister of State with Independent Charge for Power, Coal, New and Renewable Energy and Mines Piyush Goyal arrived in city for the first time this morning and in his message to the public, he said that a New India would emerge in 2022 under the leadership of Prime Minister Narendra Modi.

Piyush Goyal, who landed at Mandakalli Airport from Bengaluru in a helicopter, headed straight to V.K. Function Hall at Nazarbad where he addressed a press conference before an interaction on “Energy Conservation and GST.”

Speaking to a battery of reporters, he said that Modi government had taken a pledge “Sankalp se Siddhi,” that means “Commitment to Completion,” and a New India will emerge in 2022. “The country has surplus power, surplus coal and surplus human resources. We have a government with vision and together we will strive to make a New India by 2022,” he said.

Complimenting Mysuru for its cleanliness and recalling the contribution by Sir M. Visvesvaraya, he said that the concept of “Make in India” started at the time of Visvesvaraya. The Minister, however, did not fail to criticise the Congress government in Karnataka for not efficiently using the resources sanctioned by the NDA government. 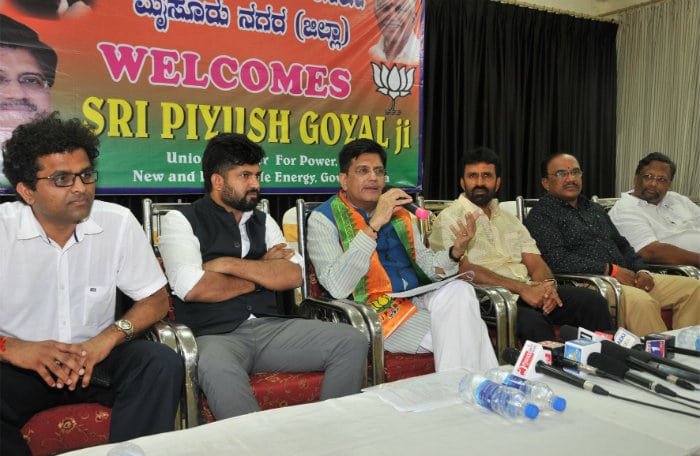 Consistently taking pot-shots at Siddharamaiah government, Piyush Goyal said that Karnataka failed to utilise the grants sanctioned by the Union government in the energy and farming sector. “Under the UPA rule, Karnataka had received Rs. 61,691 crore but under the 14th Finance Commission, Modi government gave Rs. 1,86,975 crore, (three times more) The Centre has allocated Rs. 3,174 crore, up from last year’s Rs. 2,779 crore for Railway projects in Karnataka,” he said.

Substantiating his arguments with figures and statistics, the Union Minister said that seven cities in Karnataka have been selected for Smart Cities Project. Under tourism, the historical city of Badami is being developed. “Karnataka has been one of the biggest beneficiaries of Pradhan Mantri MUDRA loan scheme where Rs. 39,107 crore loans have been disbursed. All Gram Panchayats will be provided with high-speed internet facility by the end of 2018,” he said.

Software Technology Parks of India will be established at five centres in Karnataka at Bengaluru, Hubballi, Mangaluru, Manipal and Mysuru. An IIT has been started in Dharwad, which is traditionally known as “Vidya Kashi” for being an education hub, Piyush Goyal  said.

On power, the Minister said that energy shortage reduced to nil during April-June 2017 from 9.5% in 2013-14 and peak shortage has reduced to 0.1% during April-June 2017 from 7.2% in 2013-14. “In the previous UPA government, coal auctions were not monitored and were not transparent and auctions at all the 7 coal mines in India was done for a meagre Rs. 5,000 crore. Now we are generating additional revenue of Rs. 39,000 crore out of coal auctions,” he said.

“Solar Parks of 2,000 MW capacity has been sanctioned for Karnataka and the renewable generation capacity increased by 91%. It has increased from 3,985 MW in March 2014 to 7,633 MW in June 2017. 883 MW wind power capacity addition achieved during 2016-17, which is highest annual capacity addition ever achieved by the State,” he said.

In the afternoon, he is scheduled to hold a meeting with party workers at BJP party office in Nazarbad. He will take part in the Swachh Bharat and tree-planting programme at Hebbal and also hold an interaction at Dalit Colony before returning to Bengaluru today.