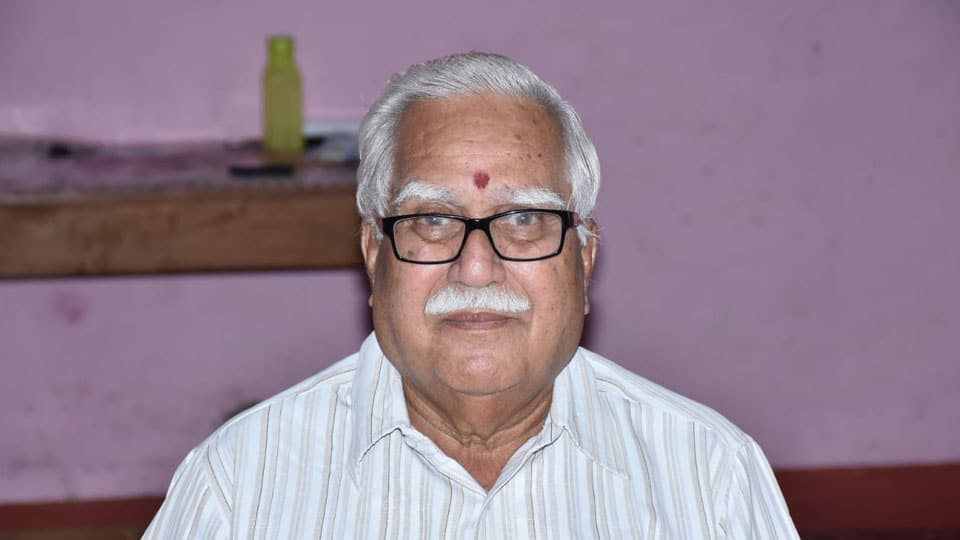 Mysore/Mysuru: Amid the COVID-19 outbreak, Prime Minister Narendra Modi is making a special effort to check on the health of his senior colleagues in the Bharatiya Janata Party (BJP) in keeping with his reminder to people on Apr. 14 to take special care of senior citizens in their homes.

The PM is calling on several of his senior colleagues on the phone to check on their health and ensure that they are not facing any trouble during the nationwide lockdown. And one such person whom the Prime Minister called yesterday afternoon was N.R. Chandrashekar, senior Sangh Parivar leader and former Corporator of Mysuru City Corporation (MCC).

By calling senior party functionaries across the country, Modi is setting an example for other Prime Ministers with his good gestures and respect for senior BJP leaders.

Chandrashekar got emotional hearing PM Modi’s voice at the other end as the conversation began with ‘Chandrashekarji’ and spoke for about three minutes.

Chandrashekar, aged 77 and a resident of Vidyaranyapuram 4th Main, 9th Cross, got a call from the Prime Minister’s Office (PMO) yesterday afternoon and the caller on the other end asked Chandrashekar if he was available to talk with the PM.

“I was taken aback and surprised and I made sure that the call was indeed from the PMO. After a few minutes, Narendra Modi called and enquired about the well-being and my health. He spoke in Hindi and English and told me that it is because of the selfless work and sacrifice of BJP, RSS and Jan Sangh workers that he (Modi) has occupied the PM’s post today. The PM sought my blessings and got emotional,” Chandrashekar told ‘Star of Mysore.’

“He recalled my services during Emergency imposed by Indira Gandhi when she was the PM and also recalled my services as a Corporator from 2000 to 2005 from the then Ward 9 (Vidyaranyapuram) and told me that he had read about my services and felt happy. I respectfully told PM Modi that I would follow whatever directions he (Modi) would give for me. Modi replied that he would like me to be a role model for the youth who are integrating the party and also serving it,” Chandrashekar said.

It may be noted that the Prime Minister has been calling several senior functionaries of the party who worked for the Sangh Parivar in the time of adversities to build up the BJP in its present form and seeking advice from them.